Hello everyone, and welcome to TV Tuesday! Today I’m going to be talking about the Prime Original Modern Love.

I honestly didn’t expect there to be a second season of this show. I thought this was one of those “limited series” deals, but there sitting in my Prime continue watching was season two of this show. Colour me surprised, yet extremely happy because I loved season one. Also, can I just say how much I love the theme song to this show?! Like, it’s so catchy, I never skip it because I love hearing it. 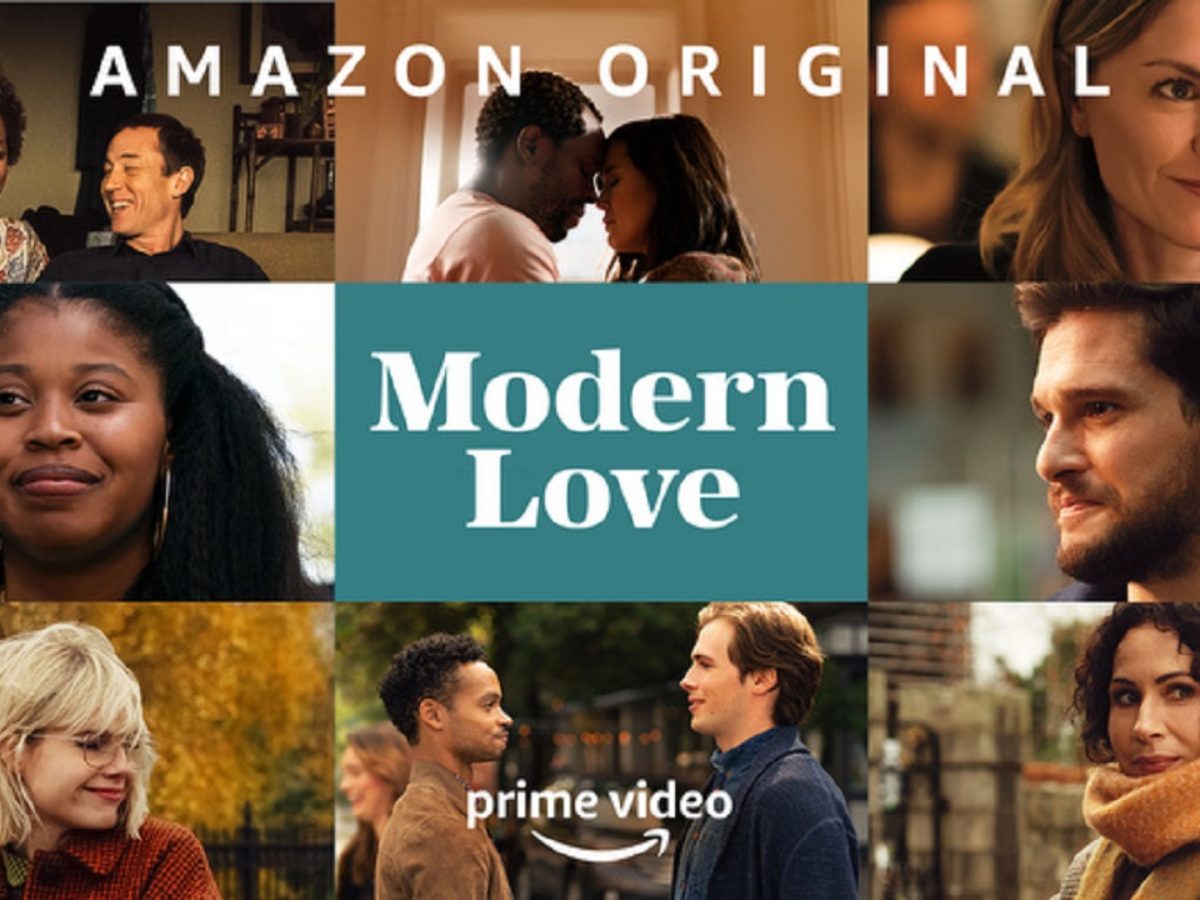 So this season is comprised of another 8 episodes each dealing with different forms of love.

Episode one really brings it in for the season and had me feeling all the feels. We meet a woman who’s trying to save money, when her husband suggests she should sell the Stag. Slowly, as the story unfolds you realize that the Stag that is always breaking down, actually has a lot of sentimental value. It belonged to her first, late husband and they spent so much time in it with their little family. Right before she sells it, we learn that’s where she goes to talk and feel close to her late husband, I thought that was just the sweetest.

She sells the car, but then that’s when she comes clean to her current husband all that she’s been feeling. She explains that she doesn’t want to feel like she crazy, and her husband is so understanding in her grief and acknowledges that grief is different for everyone and that there’s no right way to deal with it. That’s when he buys back the Stag for her. UGH! My heart!

The second episode we meet a girl who has a condition where her sleep is off; she sleeps during the day and is awake at night. This guy sees her in a diner and gives her his number. They start to date, which works because their dates are always in the evening, but as times goes on, the guy starts to have a problem with not being able to go on “normal” dates. When she misses meeting his mom, that’s the last straw and he says he needs a break.

I honestly think they needed a bit of compromise on both ends; but it also felt like he really didn’t want to put in the effort to fit around her better because he acted like she could help how her body worked.

I am glad that in the end he realized how much he couldn’t live without her and then started to try to make room for her in his life and you know, compromising.

The third episode was sweet, AND I knew who the actor was in the beginning, but then I went nahhh, so I googled it after I watched the episode and lo and behold it was Kit Harrington, I love that guy.

So our story starts on a train where everyone is on route to go home because the world is shutting down. I was really surprised to see a Covid story here, but here we are.

The girl is on her way back to her mum’s place, while the guy who has the opportunity to sit next to her, and doesn’t, is on his way to his brother’s place. As more and more people get off, the two start to talk and they have a connection. Once they’re off the train they decide to meet in 2 weeks in the same place, not giving each other their phone numbers or anything. They thought the lockdown was only going to be 2 weeks, I laughed when this story started.

Two weeks pass and it’s funny to see the girl not want to go because, you know, the pandemic, but her mum is like you should go. Then on the opposite side you have the guy going this was the girl of my dreams I need to go, and his brother being like, uhm dude, the pandemic.

They both end up riding their bikes to the station… but they can’t get in because again, the pandemic. Seeing the guy trying to sing to the cop to make his case was funny, “for love”. Then he comes up with this crazy idea because he remembers what street she lived on because she said it on the phone ­– this is what nightmares of made of – how the fuck did he remember that?! THEN, he stalks out her street, I honestly thought he was going to go door-to-door asking for her, since he does know her first name. NOPE he waits in his car… AND we don’t learn if they found each other because the episode just ends. UGH!

I mean, cute meet-cute, but man.

The fourth episode we meet a girl who’s performing stand up when she spots a boy in the crowd, time to flash back.

We go back to when she first moved to Brooklyn when she was 12 and it becomes the story of meeting this guy who she thinks she’s going to spend her whole life with… I’m on the fence about liking this story probably because I was that girl. Basically she has feelings for him, and she thinks he does too, but when he finds out his actual crush likes him back, that was game over for her. So the two become best friends, but obviously her feelings never go away, which stops her from finding someone else her “prince charming” if you will, because she’s so stuck on thinking he’s going to come back to her. Trust, I’ve been this girl.

Then one day in college, the two actually get together and have sex, this is where my story differs. He realizes that he doesn’t like her like that, probably never has but went with it anyways because he’s always known that she’s liked him and he pretty much took advantage of that, so I feel her in all her rage on that.

We go back to the club where she’s doing stand up and it’s that guy in the crowd. The two go back to their spot and decide to be best friends again. I mean, good on her for being able to do that, but I’m worried (for a fictional character) that she’ll fall into that trap again now that they’re “best friends” again.

The fifth episode holds my heart. This young teen girl keeps taking these Buzzfeed-like quizzes to see if she’s gay or not. I don’t know why she keeps taking the same test… because each time she takes it she gets a lower percentage but she can’t help what she feels for a girl at school.

The two become friends and when they kiss she freaks out and pretends that she doesn’t know her. She feels like she can’t talk to anyone because her friends won’t understand because they all think she’s going to marry this guy in their class; then there’s her mom who is rarely home and is always busy or yelling. I felt bad for how confused and alone she felt. But when she confronts the girl saying she’s not gay but she still wanted to kiss her, the other girl was just happy that she wanted to be with her. I thought was a nice ending. She still has to figure herself out but the fact that she doesn’t feel pressured to do so was great.

The sixth episode dealt with a guy who used to be in the military and when he’s informed that his wife is cheating on him he kinda loses himself even more. He wants to end his life and that really scares his wife so they decide to get a divorce.

He finds himself in therapy… where he runs into the woman who told him about his wife because the man his wife was seeing was her husband. So those two go out for coffee as they have this in common.

They slowly start to become friends, and we all know it’s going to be more… until the woman’s child gets sick and the guy ends up helping the father in what to do. He sees that this brings those two closer together so he leaves her alone… UNTIL she invites him to her baby’s first birthday where he finds out they aren’t together and that she wants to go out with him. It was a very cute ending.

The seventh episode I found rather interesting. The way they chose to tell it reminded me of the Affair because it was like both of the main characters remember the one night in different ways, and I love this kind of storytelling.

At first you’re lead to believe that these two guys had a long lasting relationship and that they broke up. But really, these two only spent one night together, a night they won’t ever forget. That night changed everything for one boy, his sister keeps calling the entire night and it isn’t until the night is over that he answers and he finds out his dad is in a coma and he has to go home. The other boy is such a sweet, sweet boy and wants to do everything he can to help him, but there’s nothing he can really do because it makes him guilty that he didn’t answer the phone sooner and spent the night with this boy instead.

Then they just never talk to each other again and it wasn’t until they see each other on the street that I think they can truly move on from each other and that night. Some really sweet, compelling writing.

They ended the season on such an emotional heavy episode, but I still really liked it.

A couple who are divorced reconnect one night after their daughter’s recital and remember what it was like to be together. So they continue to go out and have fun and they soon realize that they like being with each other. But then, just as the guy is about to propose, she tells him that she has breast cancer and it’s very advanced. This turns their relationship on its head. The guy knows he’s really gotta step up and be there for her and his daughters, and he does just that.

Oh man, watching these two re-fall in love was so fun to watch even with all the downers. In the end he gets her a ring that she was looking at and she says yes, even though it wasn’t really a proposal but it was so sweet and a nice way to end the season.

This was another great collection of stories of love in all its capacities. I think this season truly focused on romantic love, unlike last season that touched on other types of love, but this was still a good season.