Hello friends, welcome to TV Tuesday! Today I’m going to be talking about Netflix’s mini series Self Made.

This has been on my list for a little while now and I’m glad I finally got around to it. This was an inspirational story of pursuing your dreams and someone I had no idea existed. There were many elements that I enjoyed throughout this four episode limited series.

In the first episode we meet Sarah; she works hard for the little she makes as a washer woman and she puts up with her abusive drunk husband. Her hands are rough and she’s losing her hair.

This is when we meet Miss Addie, she’s a door-to-door sales woman for a hair product that is sure to make your hair grow back.

Addie plays to Sarah’s sympathetic side and in exchange for doing her laundry, Addie will do Sarah’s hair. The two become close, you could possibly even call them friends as Sarah’s hair starts to grow back.

Sarah is so happy that she’s willing to sell her product because she knows how much it really works. Addie doesn’t think that’s a good idea, she doesn’t like the way Sarah looks, like she “just stepped off the plantation”. Sarah is obviously offended, but she does it anyways… she steals a bunch of the cans and goes out to the market telling her tale of the magic of this product. Selling all the cans, she’s so excited she can’t wait to tell Addie. Addie is anything but happy with her and tries to put Sarah back in her place and tells her there’s laundry to be done.

Addie thinks she’s so much better than Sarah because she’s light skinned. What I wish we had gotten from this story was more on Addie and her background, just a little bit more. I know this series was about how Madame C.J. Walker came to be, but to know about her competition a little more would have been nice.

I don’t know if we’re shown that scene to feel sorry for Addie but it’s kind of hard to because, even Sarah tells her later, they could have worked together to create an empire, but Addie was too proud and headstrong about who was associated with her product that she got left in the dust.

Not to say Sarah is perfect, she’s far from perfect and she’s also very headstrong and knows exactly what she wants and she doesn’t really care who she hurts to get there. I think by the end of this series she does finally understand what’s important, but in the beginning she was kinda ruthless.

The second episode begins with Sarah and practically a new life; she’s met a new man, C.J. Walker, an advertiser, and she’s creating her own hair product… one that will be better than Addie’s. Because C.J.’s in advertising he helps her come up with campaigns… and they are quite a cute team… when Sarah is agreeing to his proposals.

We’re introduced to her daughter A’Lelia, who I just loved; she was bold and full of life. Sarah tells her she needs to settle down and get married, so she goes to college and marries John… ugh John.

Sarah has big dreams of opening a factory, in order to do that she must find investors willing to help pay for it. She starts off in a church… a church that good ol’ Johnny boy burns down… and claims he didn’t do it… so Sarah must regroup.

Her next thought it is to go to the richest Black man, Booker T. Washington, to help endorse her product, but when he refuses to see her… well she’s not taking no for an answer. Her next move is to go to his wife Margaret to see if she can talk to her husband, but Margaret tells her that they don’t talk about his job. Now Sarah is fuelling with rage so what does she do, she crashes a conference to make her plea public to all.

Well, that does not do any good, whatsoever. Instead Washington drags her off the stage, once she’s done, to tell her that women have no place in running a business and that he wouldn’t be helping her any way. Well geez.

But after her speech, as all the woman witnessed it too, they show up at her house and have cheques to help her business. 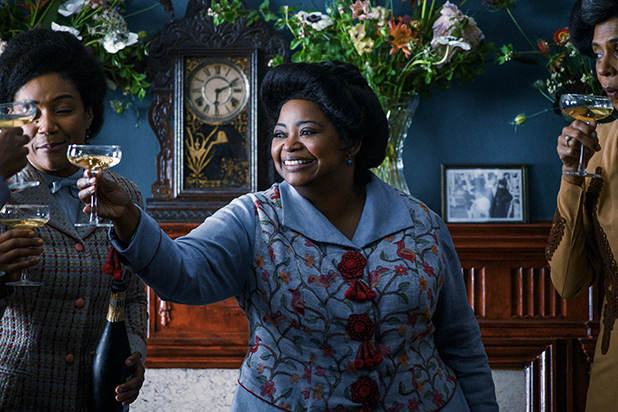 Sarah is absolutely thrilled… but guess who’s not thrilled, her husband.

You know I like CJ he’s a good guy, but I don’t think he expected any of this to go as far as it was going. He was really looking to love his wife and expected her to be home and to cook meals for him, which okay I get for the time, as it’s the early 1910’s, but he should also know the kind of woman that Sarah is; she’s a won’t take no for an answer, take charge, type woman, I’m not surprised that her business was as successful as it was.

So this leads to him seeing a woman behind Sarah’s back… Dora, one of Sarah’s top selling employees. I hated that. That’s how we find out that Dora hates Sarah and the way she treats the saleswomen and it is Dora’s doing that they all walk out on her and to go to work for Addie.

Oh Addie, she’s always looking for dirt on Sarah, and guess who’s giving it to her… good ol’ Johnny boy… A’Lelia’s husband, I’m telling you he’s a winner. When A’Lelia finds out, well this is just the perfect excuse for her to divorce him. She even tells him, she was looking for a way out of their marriage and now she’s found one, and she happy dances.

It’s alluded to in the show that A’Lelia is gay, but I can’t deny that I didn’t enjoy watching her fall for the camera woman; they were so cute together. I am mush for a gay storyline. 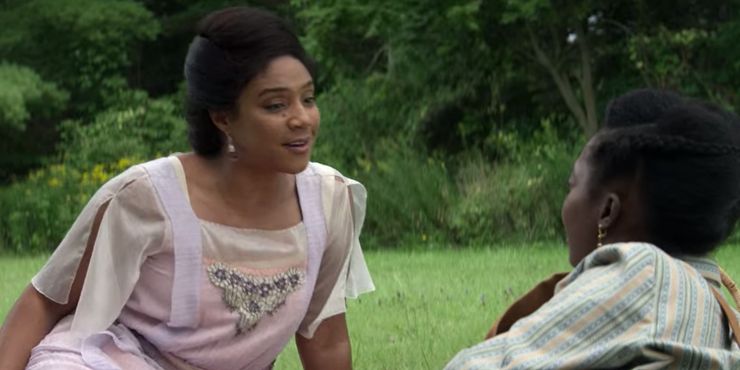 When Sarah looks to expand her business she takes A’Lelia to New York City with her for more opportunities and A’Lelia just about loses her mind with how free everyone is living. She just knows that she needs to move there.

Once they return home from their trip Sarah finds her works gone and CJ sleeping with Dora. That’s when she ends it with him and decides she needs to put her business first.

This obviously upsets CJ, but he should have known it was coming.

In the final episode Sarah starts expanding her empire in New York and this is when she catches her daughter kissing a woman and she tells her again, she needs to settle down and get married because she wants grandchildren to carry on her legacy. A’Lelia just kinda rolls with it because she knows her mother is sick and won’t be around much longer.

But as she sees her daughter with a man she has no interest in, she can tell this isn’t what she wants for her daughter, she wants her to be happy. I was happy to see that her mother came around.

The next hurdle for Sarah is CJ… he wants a divorce, but Sarah won’t sign the papers, her company name is Madame C.J. Walker… and CJ yells that it’s his name, but Sarah says she’s worked too hard to give it up. So what does CJ do? Oh he tells Dora that Sarah stole Addie’s formula… and of course word gets back to Addie, which gets back to Sarah.

That’s when Sarah tells Addie they could have worked together, but instead Addie chose to create a war between them.

In the end, Sarah gets to keep the name.

Sarah looks to sign a deal with a major company to get her hair products into chain stores, but her employees are not having it. They know that once that happens, they won’t have a job selling it. Sarah is conflicted about what to do.

What does she do… she turns to her neighbour, Mr. Rockefeller… WELL, I’m glad she didn’t take his advice because he was pretty much like, screw your employees who have been your rock and support since the beginning and sign the deal, your employees know nothing. I was like wow, alright then. Nothing like wise words coming out of an old white man’s mouth, huh?

So she announces that she’s not going to sign the deal, and obviously everyone is happy.

This was well made, and definitely was engaging. If you read the history on a lot of these people like Sarah and A’Lelia there is no mention of a lot of the drama that happens, the war, the cheating, or A’Lelia being gay, so I wouldn’t be surprised if it wasn’t true, or embellished versions of the truth, to create a better, more dramatic show, but I still enjoyed watching this miniseries. It’s still interesting to see how history is made.

3 thoughts on “Let’s Talk About… Self Made”