Hi guys! Look at me, another concert wrap up, two weeks in a row, who am I? November was definitely a month of concerts for me. Last Friday I had the opportunity to see City and Colour live for the second time, and it was such a lovely show! I hope you enjoy my wrap up! 🙂

City and Colour: A Pill for Loneliness
Scotiabank Area
Toronto, ON
Friday, November 22, 2019

This was my second time seeing City and Colour, the first time in an arena. The last time I saw him was at an outside venue that seated less. Personally, I think his sets work better in smaller settings because of how chill and relaxing his music is. I found that in a large setting there were more people (duh!) but it led to more people moving around, (why were SO many people getting up all the time) and talking! So many people just kind of spoke through the concert, and it felt at times like these people were sitting down to dinner with background music. Okay, I’m being harsh, somewhat, but it was really distracting when all you want to do is listen, sing along and feel in the moment.

All of that aside, Dallas Green a.k.a. City and Colour, put on a beautiful show. His vocal range, every time amazes me. He sounds just as he does on his recordings, which is rare to find in an artist, and I love it.

Before he hit the stage though, he had not one, but two opening acts. My brother and I got to our seats just in time to see the first act, Ben Rogers. Before I talk of him, I want to say that our seats were pretty good. We had section 121 20 rows up, so we had a good view of the stage on a slight angle, but still good.

And speaking of soulful music, his second opening act, Jacob Banks, man was he a soulful artist. He wore is expressions on his face so clearly. He really sang from the heart, and it shows on his face, he also put on a great performance.

I couldn’t find a setlist for Ben Rogers, but I put a link to a few of his songs for anyone interested:

Then it was time to wait, half an hour. In that time, I used it to buy a concert t-shirt. It was the first concert t-shirt I’ve bought all year, and I’m wearing it as I type this out, much love to the one and only City and Colour.

When the lights dropped, he took his sweet, sweet time coming onto the stage. The crowd got excited and he began to play the first single off his new album, A Pill for Loneliness, Astronaut. This then led into the second single, Strangers.

Dallas was really quiet and just kinda said hi and moved into Fragile Bird. This then transitioned into If I Should Go Before You, Northern Blues, Two Coins and Runaway.

He played Sensible Heart, and just after that he announces that he missed a really important date the other day. His mother had a birthday and so he asked if we could do him all a favour and sing happy birthday to her, her name is Pammy. What turned into a sweet sing-a-long, turned really weird when the girls beside me, one filming, the other screams into the camera, ‘I want to fuck your son’ like why? Even when I have a seat at a concert, I get the colourful sit next to me 🙂

Dallas then says thanks and ‘love you mom’ he says that the next song is a song he wrote years ago when he first started going on the road and leaving home, and he started playing Hello, I’m in Delaware.

As soon as that was over he goes, (I’m paraphrasing) ‘if you like what I’m putting out and you know the words, sing along. This song is about getting out of a hard time’ and he plays Little Hell. The way the phone lights went up, lighting up the arena was instantaneous. It made for the perfect ambiance. 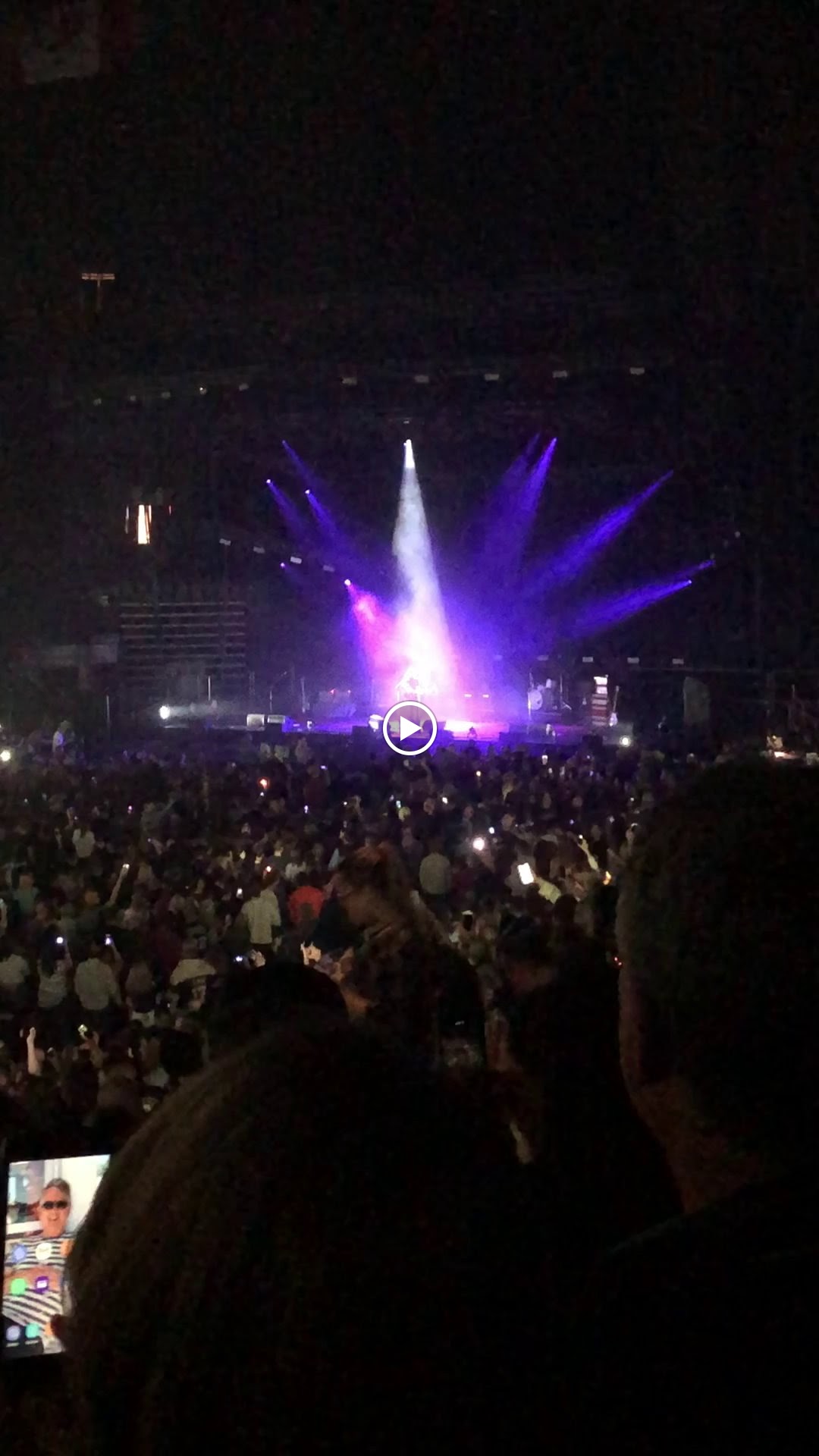 This then launched into Northern Wind, in which he goes ‘this song is about… well pretty much the same thing… if you know the words sing along’.

He played a song off the new record, which I’m not familiar with, Mountain of Madness.

He then goes ‘this next song is about messing up’ and began playing Lover Come Back, which is very self-explanatory. He played another new one, Difficult Love. 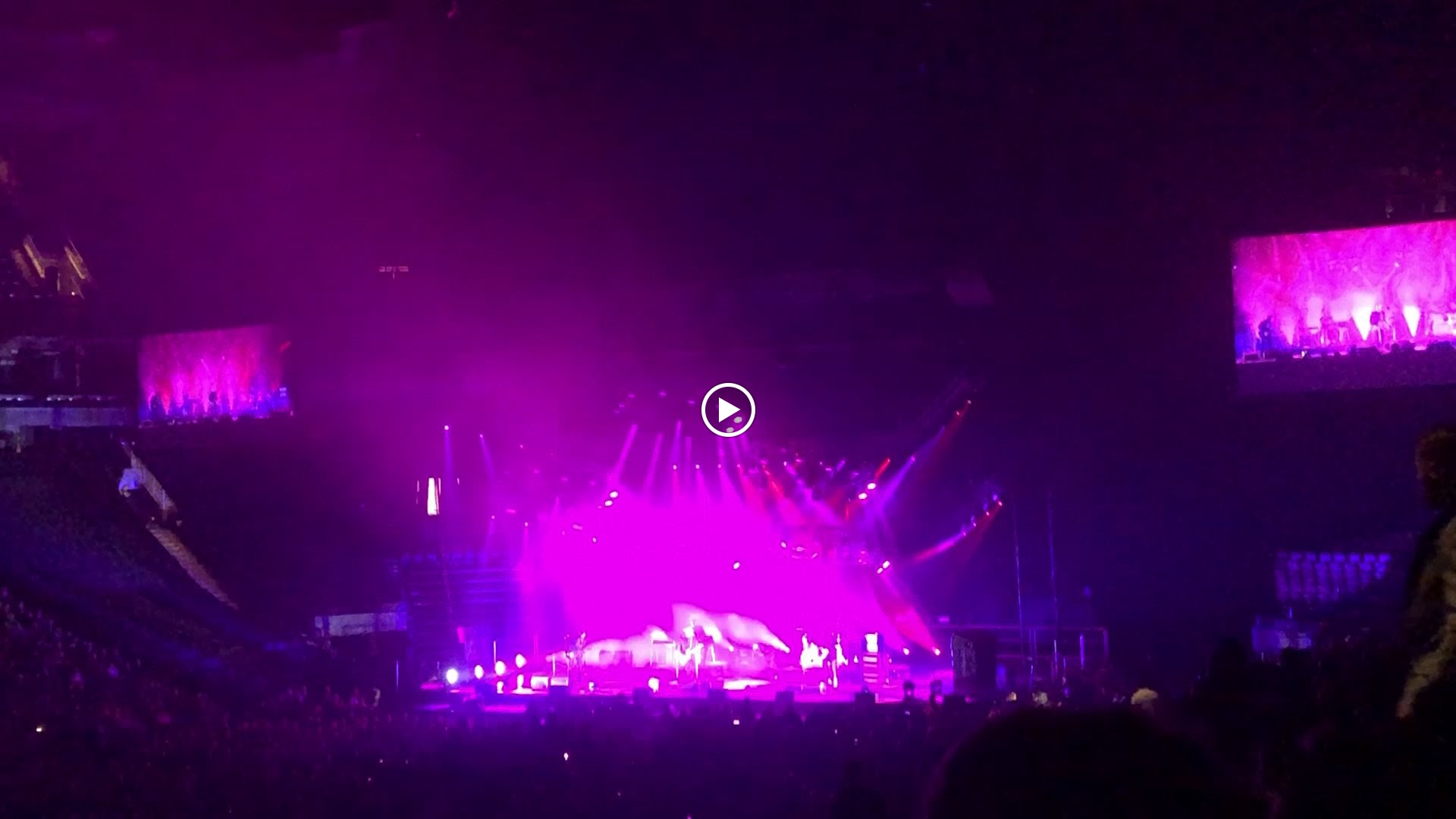 I was surprised to hear Waiting… Dallas goes; this song is all about being in the moment. Forget about everything that has happened in the past and everything you have to do tomorrow and just live in the moment. He tells us that everyone thinks it’s a sad song, but he goes ‘really it’s not’.

The crowd start cheering and clapping so loud. The people in front of us start chanting “Dallas, Dallas, Dallas” I told my brother it sounds like we’re at football game!

Dallas did eventually return to the stage, at first it looked like he was just picking something up and was going to leave again, but he picked up his guitar and began to strum. He talked about a friend who is no longer with us, and he played Body in a Box.

After this, he goes ‘there was a very important moment in this building last month’ at first I was hella confused, you’ll find out why, because he goes last month was the unveiling of the Toronto Raptors championship banner, and the audience goes silent for a minute as the banner slowly rises. I’m not a basketball person, so this is why I was hella confused, and I have to say, I’ve never seen a bigger Raptors fan. He actually got permission to have it taken down so he can unveil it again at his show because he missed it last month. What a guy. He even had these limited shirts that had the Raptors logo intertwined with his because he’s that much of a fan.

The crowd started to go nuts as the banner was lifted, and it stayed behind him for the rest of his set. He tells us, all he had to do was ask if he could take the banner down, and they went ‘yep’, and there you go.

Then he started playing The Girl, his top played song on Spotify and probably his most beloved song. 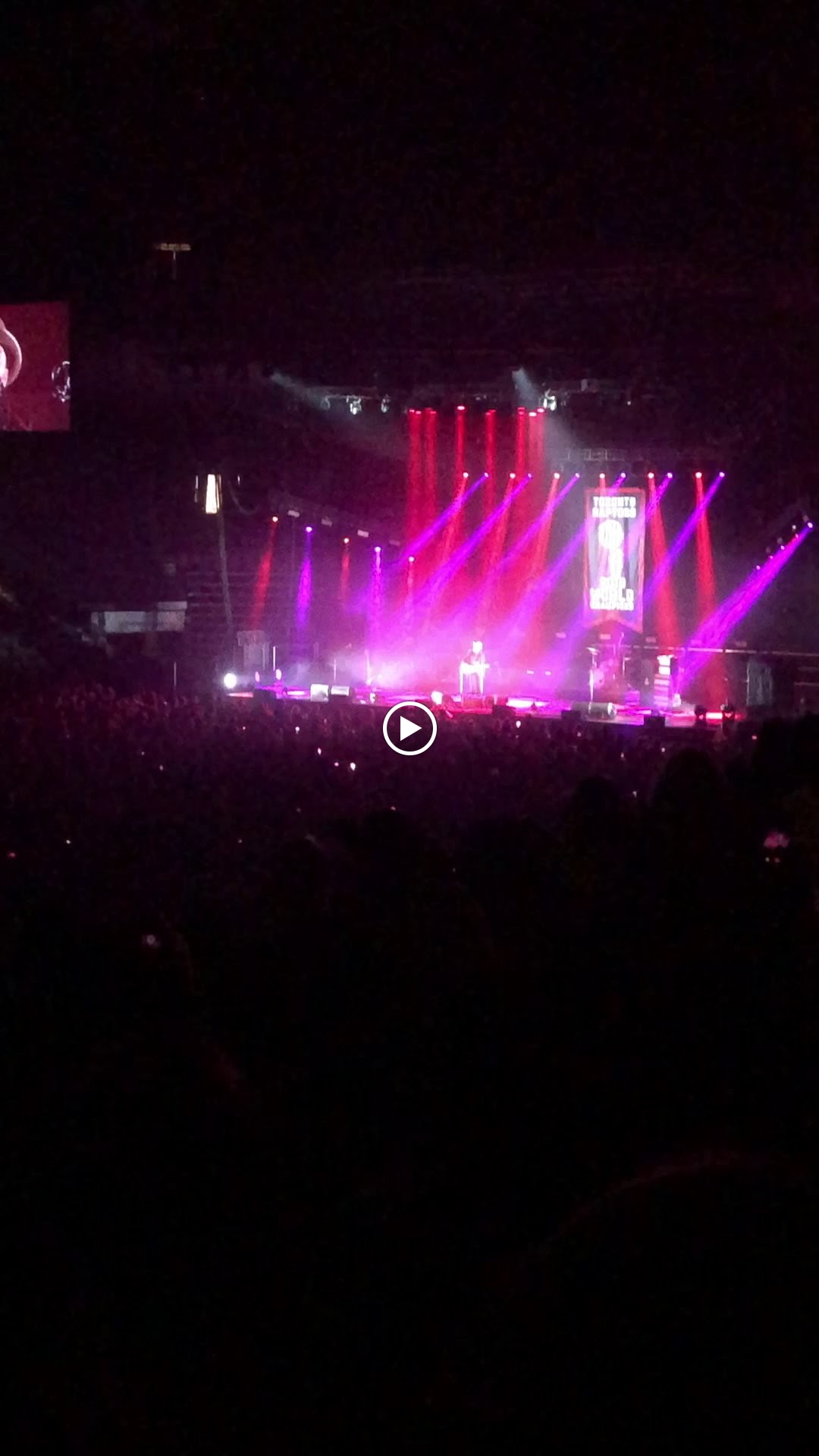 After that it was another new song Living in Lightening (which I used for music Monday last week), I enjoy that song. Then he started playing We Found Each Other in the Dark, that song is just, my heart can’t, such a beautiful song. 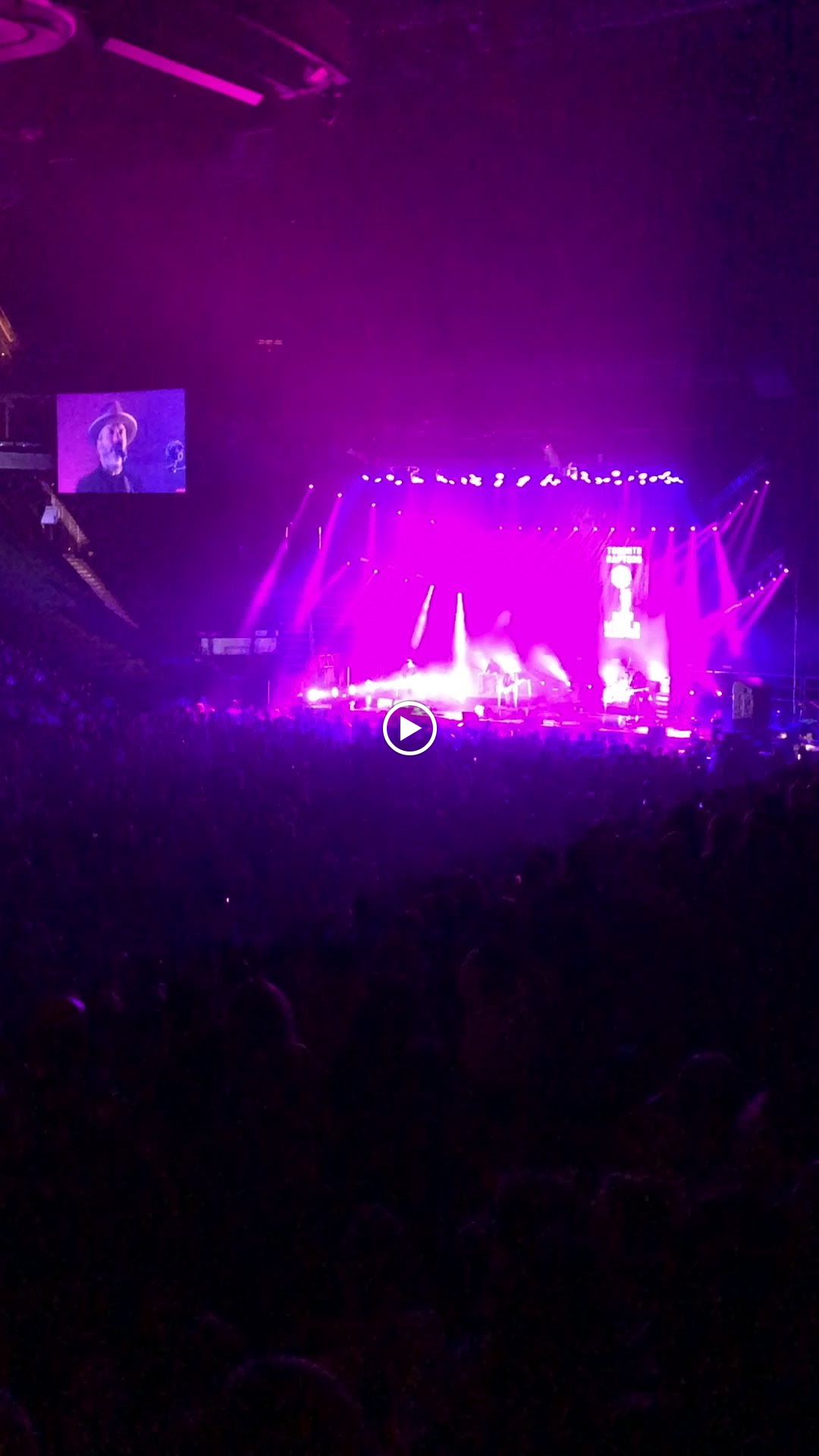 The show ended on Sleeping Sickness in remembrance of Gordon Downie. I have to say, I was surprised this was the closing song, but it really worked. Everyone sang along, then for Downie’s part Dallas let the audience sing it and it was just this eerie, yet serene feeling that washed through the building. 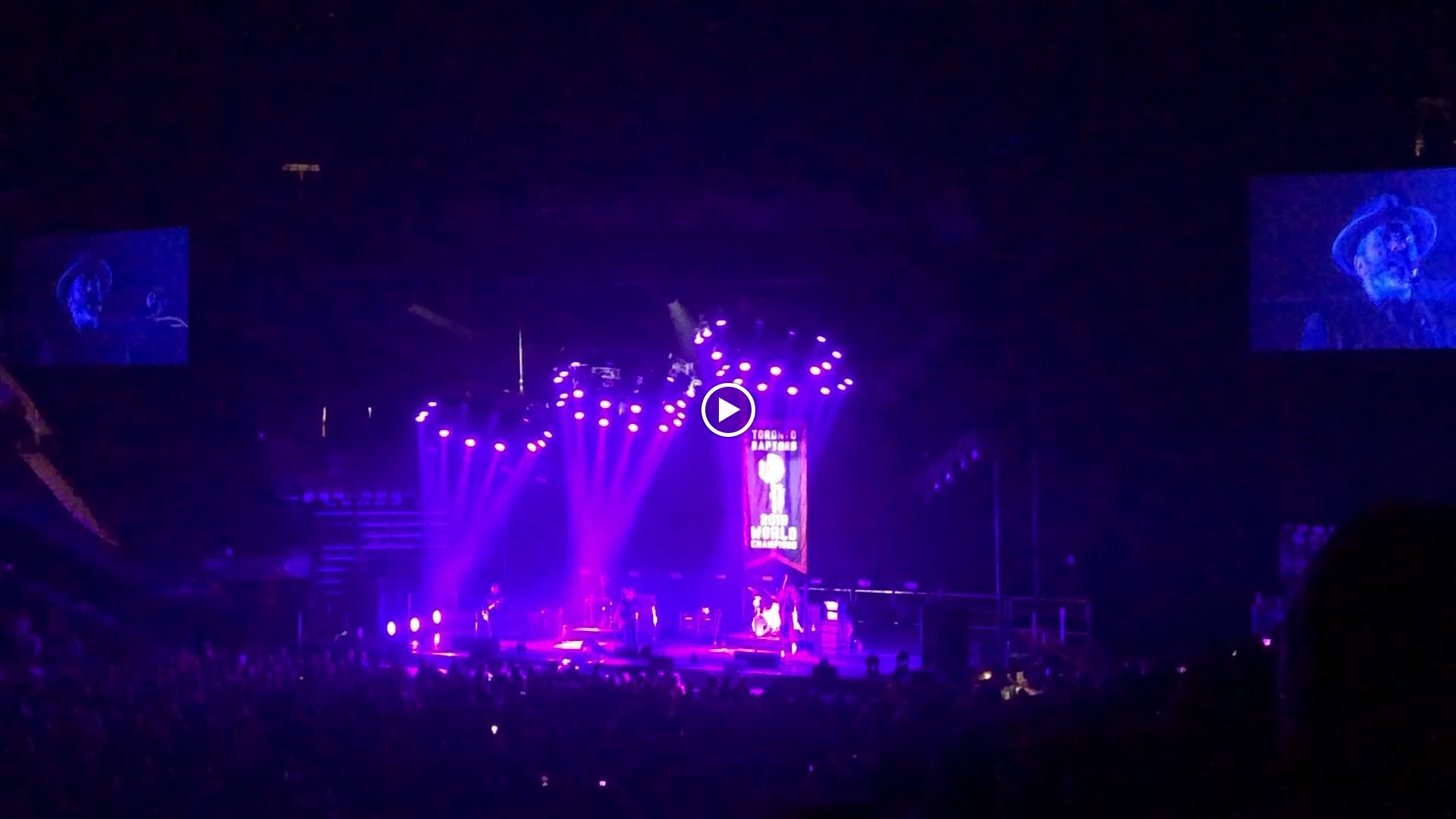 It was definitely one way to end the night.

Looking back, first of all I can’t believe he played 21 songs, it all seemed to go by so quickly, and secondly the songs he chose to sing were more or less on the sad side. This tour was called “A Pill for Loneliness” which yes is the title of his new album, but I feel like it gave him the opportunity to play a lot of his slower and more heartbreaking songs. Like I’ve never heard him play Body in a Box live. (Yes again, I know I’ve only seen him live once before, but it seems like one of those songs that artists don’t play live… it’s always been a favourite of mine because of how much imagery it uses and the onomatopoeias he uses are so good, word person, I can’t help it!) All of that to say, it was great to hear it live, as well as all the other sad songs too, like Two Coins, Little Hell and Northern Wind. He could have played more of his upbeat songs, because he does have them, but as I say, looking back it wouldn’t have fit the theme it looks like he was going for.

This was another really great performance, and I look forward to seeing him again the next time he comes around.

5 thoughts on “City and Colour: A Pill for Loneliness Tour”