Hi guys! Happy Tuesday! Today I’m posting something a little different as a few weekend’s ago I had the pleasure of seeing the Maine for the fifth time, and I’m about to talk about my experience! Enjoy! 🙂

I still can’t believe this is my fifth time going to see The Maine, and no matter how many times I see these five boys, they just keep getting better and better, this time was no exception.

Let me paint you a picture of the day. It was a Saturday in November. It was grey; no sun for miles, although it gets dark at 5 p.m. now, so even more dreary. It was cold; the kind of cold you have to wear hat and mitts for. The travel to get to Toronto was less than stellar, but would I do it all again for these boys I love so much, hell yes I would.

My brother accompanied me to this concert. This is the first concert we’ve gone together where we’re in a mosh, standing room only type concert. We’ve been to Warped Tour together, but this is a different environment. A small club that holds just over 1,300, sold out show too.

We arrived, checked our coats into coat check (that later was a pain to retrieve) and headed for the stage. People everywhere dressed in different shades of yellow: mustard, gold, canary, lemon; some even carry yellow flowers. This is not weird; the band has instructed everyone to come wearing yellow to promote The Mirror tour, as well as to bring flowers to place “on the grave of the child that I used to be”. We didn’t bring flowers, but we both rep-ed some mustard yellow shirts.

It was like emo night between sets as the songs were all pop-punk songs from anywhere between 2000-now, which was a lot of fun and really got the energy level up.

Well, me, I’m always the lucky one. If you’ve ever read any of my other concert wrap ups, you’ll know that I seem to attract the drunk, crazy ones, and guess what, this night was no different. If it wasn’t her head that kept swinging back, it was her butt that kept knocking into me. Then at one point I literally ate her hair because she swung back as I was trying to enjoy the show. I guess it wouldn’t be a concert experience without the drunk ones.

The opening act, Twin XL were an experience. They had a tropical theme, and their songs were upbeat. They are from California, and they well, seem very California. I’m not going to lie, a pet peeve of mine is when Americans come over and they start throwing the words snow and poutine in their set as if it’s a comical joke. Like seriously? Meh. They were trying to appease to the audience, but I can really leave it at the door. The lead singer kept talking about how he had to buy gloves for the first time… like congrats dude. It’s funny because later in this very blog post I’m going to talk about John appeasing to the Canadian audience again.

Needless to say, I’ve never heard of Twin XL, or their music, but I enjoyed what songs they did play.

Looking back, I never realized they played so many songs, but I can remember them. During Sunglasses they were wearing sunglasses. Everybody’s Talkin’ had an important message. During their song Messy, they instructed everyone to pull out their phones, turn on the flashlight so that we could all participate and become one. It made the whole place really light up, plus it’s a pretty catchy song. They ended on Good which was also very catchy, and makes you want to instantly dance; it’s a good way to go out. 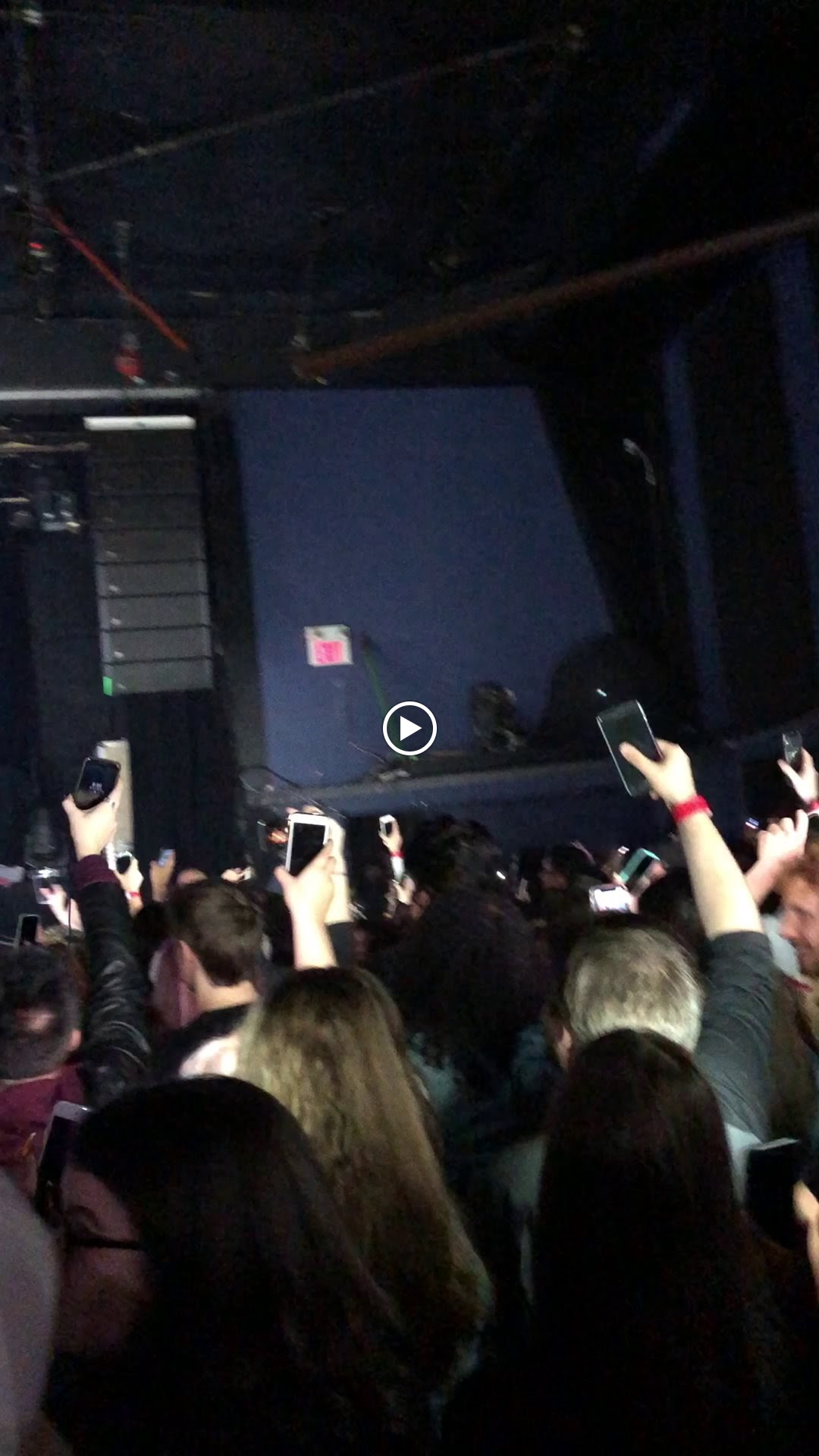 The lights went back up, emo night returned with the jams.

Maybe fifteen minutes went by and a countdown appeared counting a minute down. When it got down to the last 10 seconds it was like counting down to the new year. It was definitely an experience. This led to a video of the band talking about mental health in such a poetic way that they always seem to talk in, and it was just so moving.

That’s when the boys in yellow graced the stage with Slip the Noose, which led into My Best Habit. Hearing the songs off their new album was something else. They are their most moving songs and singing the lyrics at the top of my lungs almost took my breath away. There were moments where I felt like I just couldn’t get the words out loud enough. 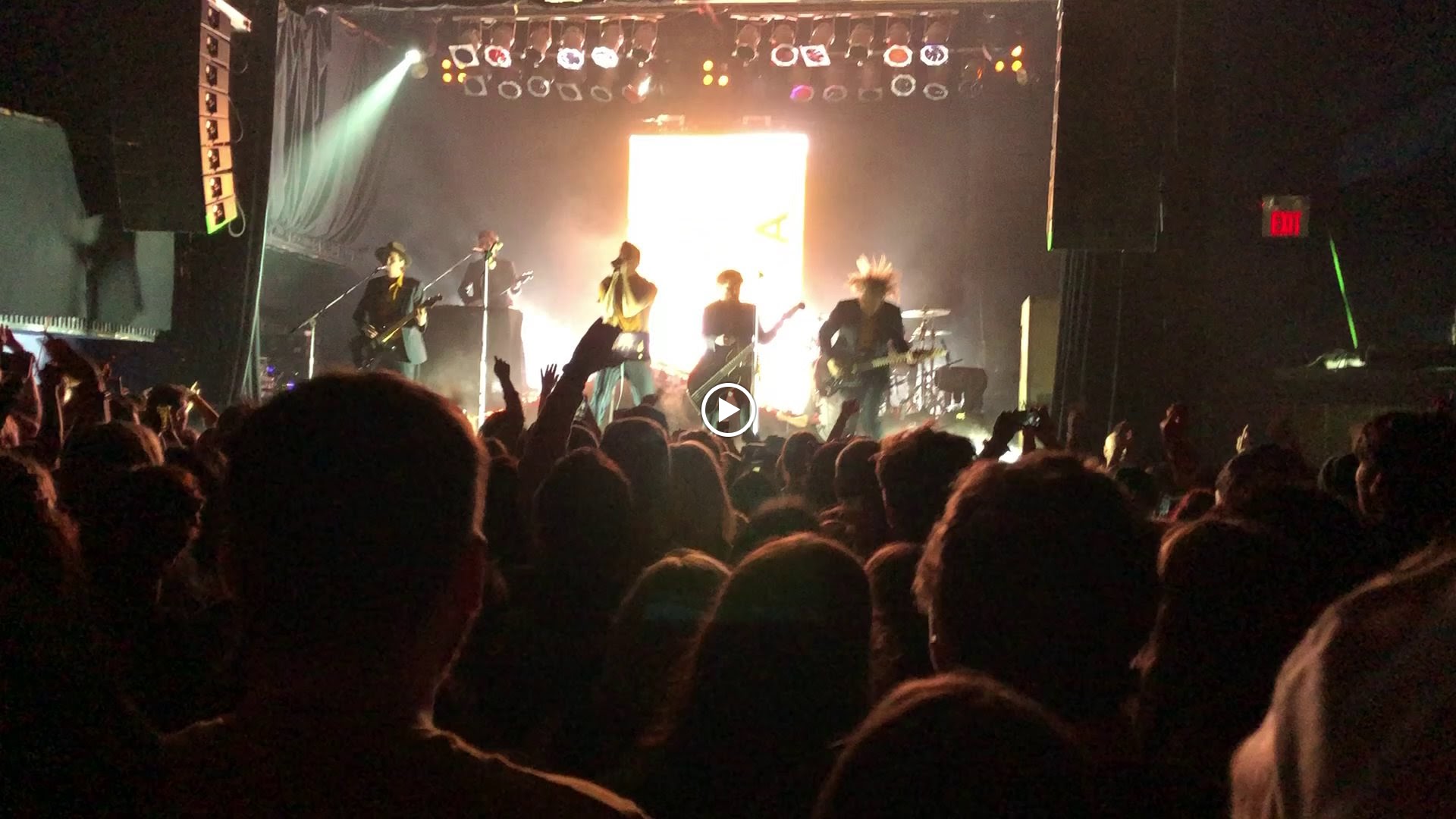 Something I always seem to forget, and I don’t know why, is how witty John is. My gosh. He told us that they’re trying to get into the Guinness World Records for longest concert ever. He goes “remember when Jay-Z did that concert for 36 hours, we’re trying to hit 40 hours”. Obviously he was joking, but he was so ready to get the festivities on.

They played a song off their album Pioneer, Like We Did (Windows Down) and then one from their album Black and White, Inside of You which I they haven’t played in a while. The crowd went nuts. Oh it was so much fun.

What I really loved was the use of the back screen. While they played their new songs they had lyrics from the songs, lyrics like “In this moment I could die with you”. 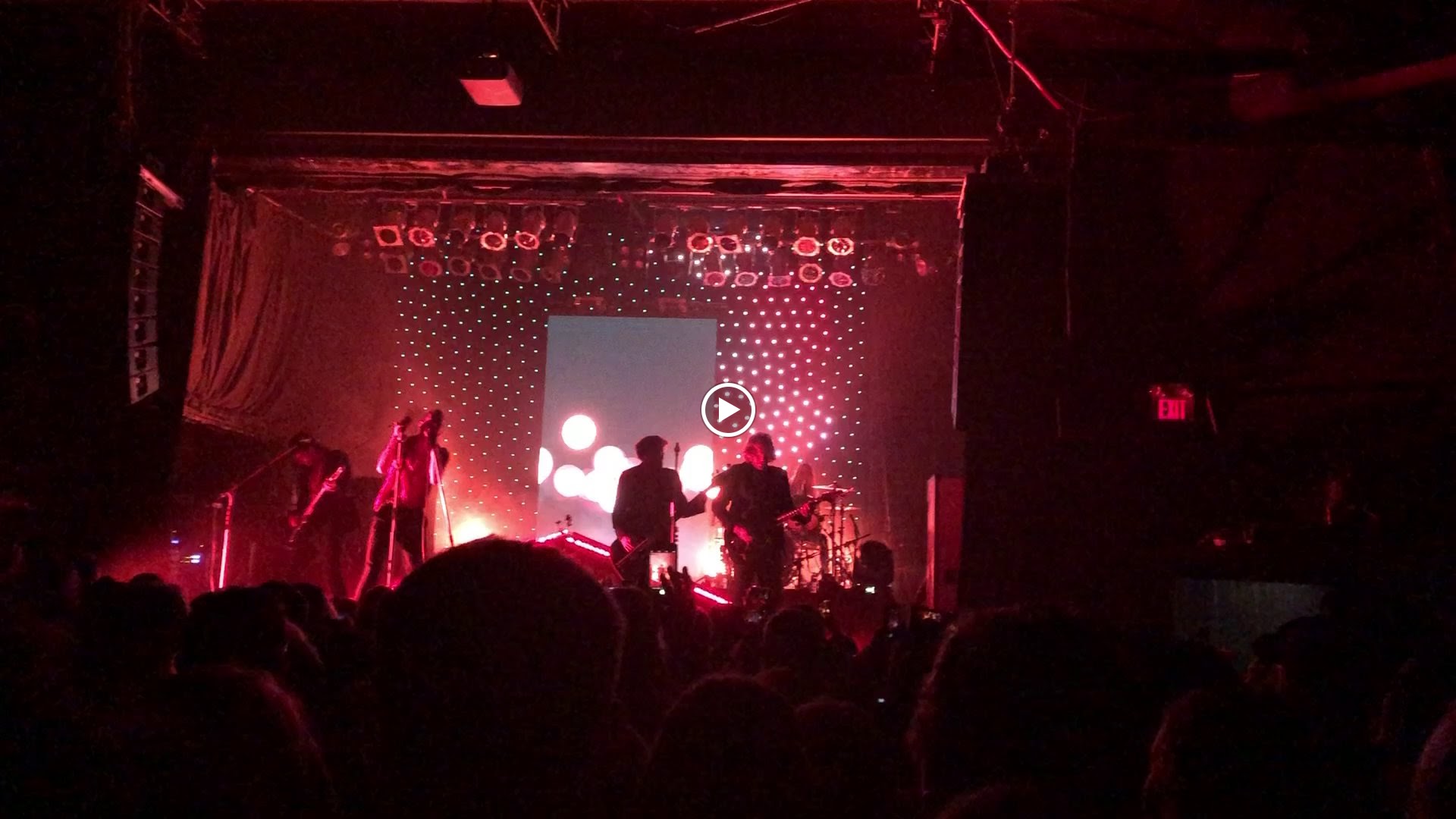 They then played Don’t Come Down and Heaven, We’re Already Here. When Am I Pretty? started, I lost it just a bit. That’s one of my favourite songs. Instead of playing my favourite part though they took a break to announce that they were at hour 80 or some crazy number like that, in their trying for a world record, and I guess this threw people off so John pointed out that this girl’s boyfriend’s eyes popped out of his head. Then after that John goes “okay we have two songs left” and another person’s face was shocked too, and of course John had to point that out too. Such practical jokers they are. It’s yet another reason why I love them. 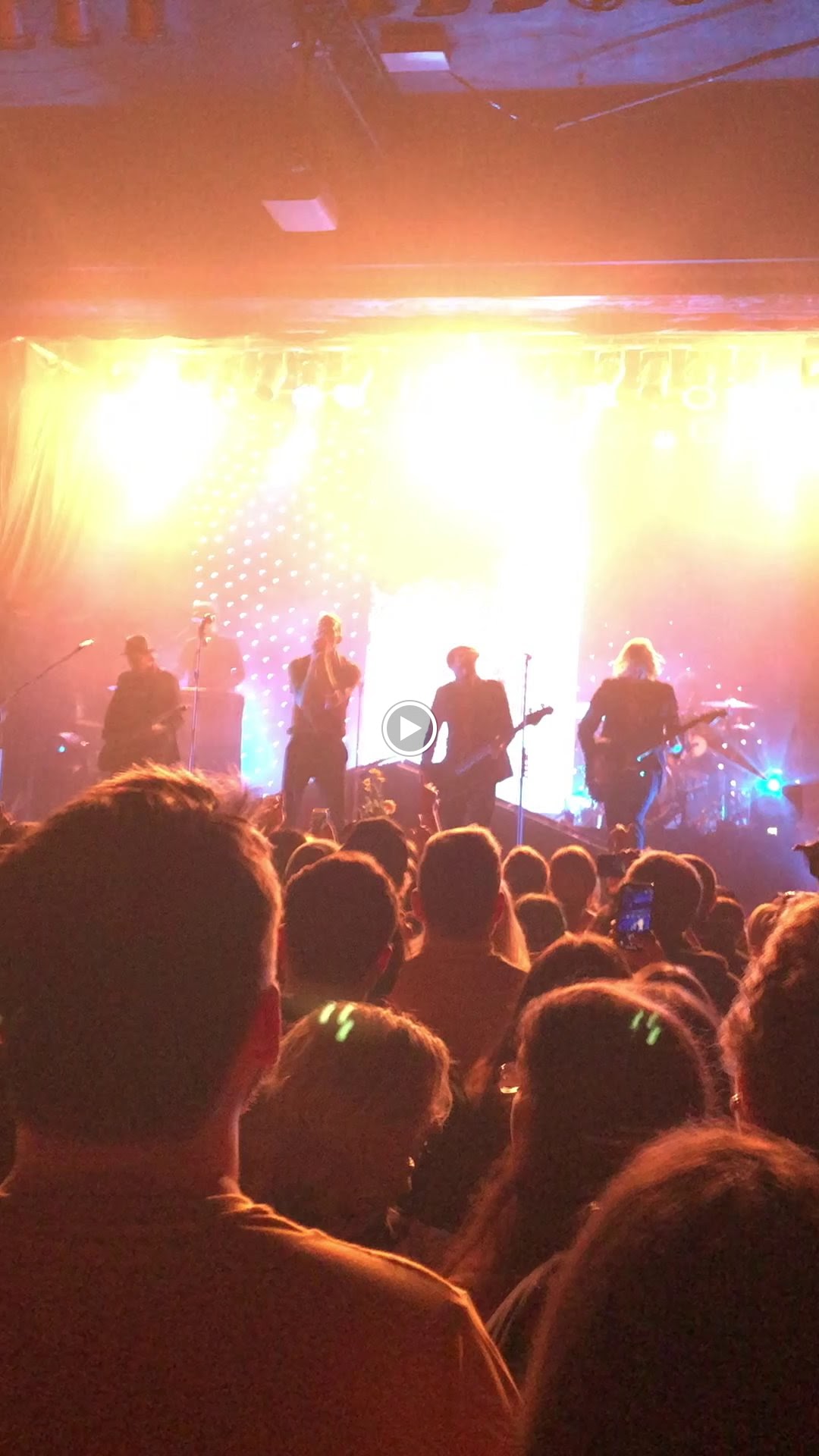 This led into Fucked Up Kids and Bad Behavoir.

They had a bit of an intermission when they played Lovely… it’s a four-minute song, very minimal lyrics, yet such a beautiful melody. John tells the crowd to sing along of you know the words, and the crowd is just swaying along.

I’m sure there was an introduction to the next song, and if I’m being completely honest (as I’m writing this a week after the concert, my memory is fading) I can’t remember if How Do You Feel? came before or after the acoustic intermission… in my recollection I think it came before because we jumped around, and felt a lot before John just disappeared. He began to make his way to the back… and I knew that something was going to happen because as they were doing sound check earlier they set up a microphone right behind me. So guess who appears behind me with an acoustic guitar? John.

Now, this club is small as I mentioned, so I was quite close to him… meaning I was quite far in the back. But he came back there and strummed on his guitar, and then proceeded to joke around. He started playing All the Small Things by Blink-182 and he just let the crowd take over. He made it this experiment because some people went to the na-nas too quickly and John totally called them out on it… as I’m writing this I can hear him saying it in my head. He goes how do you know that song? Is that song considered old now? In which the audience agreed that it was. Although, I think we had a good mix of ages in the crowd, I wouldn’t be surprised if everyone was over the age of 20.

He then went on and told us that if he played Canadian songs, it would win the audience over so with that he played some Avril Lavigne, and of course “Look at this photograph” good old Nickleback. Then he goes, my favourite line is always the next line “what the hell is on Joey’s head” and of course the whole audience is singing along, so he goes “who’s head?” then starts to name J names. Then he follows that up with “I don’t know the rest of the words to that song”. That’s alright because I’m sure no one else does either.

He gets back to business though by playing (Un)Lost. Right near the end, John stops everything and decides to bring a girl up on stage, Riley, and then a guy comes up on stage, Will. At my vantage point I couldn’t really see anything. But before you know it Will is getting down on one knee and proposing to Riley. Then there’s John, “so what did you say?” Into the microphone “Obviously” so John says again “Obviously” and Riley gets to finish singing the song.

It was a really cute moment; I’ve never been part of a proposal before so it was exciting.

John then makes his way back to the main stage, and they play Tears Won’t Cry (Shinjū) which is a great dance number.

They then played their singles Black Butterflies & Déjà vu and Numb Without You.

Lastly, they ended with Flowers on the Grave, which was a great way to end the show, as it is the closing song on their new album. I was hoping for an encore, but that’s all we got, and I’m okay with that.

It was another great concert put on by the Maine. It felt like so much happened in such a short amount of time, but you always leave feeling good.

One thought on “The Maine: The Mirror Tour”