Happy Tuesday!  Welcome back to TV Tuesday, today I’m going to be gabbing all about the fifth season of Black Mirror.

Black Mirror always has these interesting and weird plots but this one is hella strange. At first you have no idea what this episode is about. I really like how much backstory we get for each of these characters.

Karl is this bachelor who lives his life playing the field. While Danny is this family man who loves his wife and family and goes to work, everything is very status quo.

It’s Danny’s birthday and Karl shows up, the two haven’t seen each other in a year and have barely kept in touch. The two catch up a bit but what really gets them talking is the game that Karl gets him. This virtual reality simulated game called Striking Vipers.

What looks like this innocent fighting game where you can chose to be who you want quickly turns when Karl’s character, a female ninja warrior kisses him. Danny is freaked out and wants out of the game. It isn’t until the second time that his character, a male ninja warrior and Karl’s character have sex… and continue to do so every night. But Danny is so out of it and his wife notices and is upset that Danny doesn’t want her anymore, especially when they’re trying for another baby.

Danny doesn’t want to tell his wife about thee secret meets he’s having with Karl so he breaks it off with Karl. To Danny it’s a form of cheating and he won’t have it. This kills Karl, and he tries to fill the void, for seven months, but nothing works.

Well, Danny’s birthday comes around again, Danny’s wife is now pregnant and she invites Karl over for dinner. Danny is pissed about it but goes along with it. Of course Karl uses this to plead Danny to come back to the game, to tell him he’s tried everything but nothing has worked. He’s says he’ll be on at midnight… and of course Danny just can’t seem to refuse. When Karl in the game says he loves him, Danny freaks out.

So the two meet and duke it out. Danny wants Karl to kiss him to see if it’s just the game or is it real life. They both claim it’s real life, but end up fighting in the street. That’s when the cops find them and take them in. Now Danny’s wife has to bail him out, and she’s pissed.

I was surprised he even said anything about it. Danny seems so reformed that it didn’t look like he would ever tell his wife about any of this, but he does and we flash to get another birthday where they get each other gifts. Danny gets to spend one night (I’m not sure if it’s a month or a year) with Karl in their fantasy and she gets to go out and pretend she’s not married. I think that’s actually a pretty sweet deal for the both of them and I’m actually glad they could come up with a solution that benefits both.

I guess this was trying to portray today’s addiction to fantasy worlds and VR it was very interesting and really well done.

I like how detailed these episodes are. The fact that there are 3 in depth episodes is better than their 5-10 episodes they’ve done in the past.

This one deals with Chris, he’s this ride-share driver who only seems to pick up people from outside this company Smithereens. Smithereens is this social media conglomerate that everyone seems to be obsessed with. Well one day while picking up a passenger who actually works there he kidnaps him in hopes to speak to the CEO Billy. But that seems to be harder than it looks as the man he abducted is only a 22-year-old intern. He freaks out because how was Chris supposed to know that, as he’s dressed in a suit. I didn’t realize there was an intern attire.

So he throws a bag over his head and plans to drive off somewhere, he doesn’t get very far as a couple of cops notice and follow. When he gets pulled over and speeds away it becomes a full on chase until Chris ends up in a field where the car stops working.

It becomes this whole situation where all he wants is to talk to Billy, but it becomes harder and harder as we learn Billy is on a 10 day talk to no one retreat. Taking to the COO is no good because Chris doesn’t want that.

It takes time and people but finally someone manages to reach Billy, and all he wants to do it talk to Chris see what he wants but everyone advises against it. Finally, Billy just looks up Chris’s number and calls him.

This is when we learn the full story because as the episode progressed we got bits and pieces. We knew that he was a teacher, and his fiancé died in a car accident dealing with a drunk driver 2 years prior. But when he talks to Billy it all comes out. Turns out that Chris blames Smithereens for his fiancé’s death because he was driving home one night when his phone went off and he decided to check it. He was driving down the same patch of road he always does so he looked down, and in the amount of time it took for him to do that, the drunk driver slammed into their car. The drunk driver got blamed for the accident, but Chris blames himself and he wanted Billy to know.

This episode for the most part was good, it wasn’t until the end when you find out Chris is just a grieving man and so much pain in his heart that you really feel this episode. It’s in that moment you feel the magnitude of pain. Then when Chris wants to let the intern go, the intern would rather tell Chris not to kill himself than save himself.

That ending though! We’ll never know if both of them died, but I guess we’re led to believe that the sniper got both of them. What a way to go, then the small clips of people using Smithereens and being distracted. It’s like everyone on social media now, we’re all so obsessed with the constant updating and the FOMO it’s a little insane. But it was definitely amazing representation and eye opening.

Okay, that last episode was really good, and I love Miley and all, but her acting in some scenes was not my favourite. She was good as the doll, but the whole scene where she lashes out on her aunt was kinda ehhh for me.

That aside though, what a crazy concept. So this focuses on a young woman’s singing career, Ashley O. Her aunt is her manager and is always telling her what she should do, this that and everything else. Ashley wants to go in another direction, but her aunt wants her to stay this pop, positive image, whereas she wants to be more real and deep.

Her aunt makes it out like she’s got a problem and needs to be put on anti-depressants because she writes sad stuff.

On top of this, they launch this doll, Ashley Too so that everyone can have their own Ashley as a friend.

This is where Rachel and her sister Jack come into play. Rachel is a huge fan and wants an Ashely doll. She soon gets one and it gives her the power to want to dance and do makeup and just be better. Jack her sister thinks it’s all a load of crap. When she thinks the doll has taken it too far she hides it from Rachel.

I have to say, I loved the sister dynamic, sure they don’t always get along but you can see that they love each other even when they’re mad at each other.

So back to Ashely’s story, her aunt drugs her into a coma when Ashley isn’t compliant to what she wants. She blames Ashely for having to take her in at age 22 and giving up her life. It seems like she always wanted to be a star but since she had to give that up she forced it upon her niece.

Now that she’s drugged she tells the media that it was something she ate, an allergy to shellfish… because she thought Ashley was selfish?!

Anyways, they use this as a way to gain access to her brain and to see her making songs. They use those thoughts and and turn them into real songs. They want enough to make an album and then they’ll probably kill her. 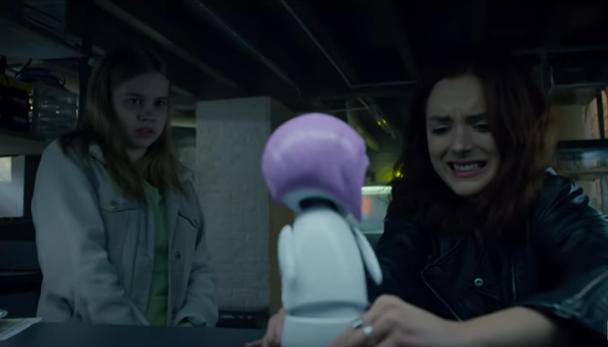 But that’s when the Ashley Too doll that Rachel owns starts acting weird so the two sisters work it out to try and figure out what is wrong with it. A side plot is that their dad is a mouse exterminator and he’s been working on trying to get rid of them without killing them so he has this program that can see their brain activity. They use that to hook up Ashely Too. They accidental delete something and she comes alive. What they deleted ends up being the limiter to make Ashley say only positive things. Now that it’s been removed she’s free to be herself… the version of her that’s not in a coma.

That’s when they hatch a plan to expose her aunt. I have to say it was quite the plan and it was actually pretty funny. They manage to reach the real Ashely and unplug her from the machines that are causing her to stay in a coma. The three girls now have to battle against 2 big security men, and it’s hilarious how they manage to outsmart them.

Meanwhile, Ashley’s aunt is at this conference talking about how hologram concert experiences are the next big thing. She can make her any size she wants, and it will always be the best performance, yadda yadda yadda.

Now the girls have started a police chase to get to this venue as fast as possible to expose her aunt.

The way it ended was just so, uh. There was so much build up and we don’t get to see anyone reprimanded for what they’ve done. We just see her aunt go ‘oh shit’ and she knows everything is over.

Nor do we see what kind of trouble the girls get into. What we do see is Ashley living her punk life that she always wanted to live. And Jack, who was always the hard rocker chic get to be in the band with her. That was nice. It was funny to see some of Ashley’s old fans run out of the venue they’re preforming saying her stuff is awful.

This really plays big on the way we view artists and the way things can go very very wrong. I like that the whole one world-wide concert, and hologram concert was a bust because if we started to do that in real life it would just be such a sad experience. You’re taking away the real authentic feel of going to see a live show; it’s no longer life when you add those factors because a hologram isn’t real.

This season was too short. I wish we got at least 5 of these episodes, but I’m still glad we got this.