Hi guys! Happy Tuesday! Today I’m going to be sharing with you my concert experience from last week. I had the chance to see Pink live in concert last Monday, and boy was it ever a show! Writing this out has been like re-living it all over again, and it’s so much fun, I hope you all enjoy!

This was a rescheduled tour date, she was originally supposed to come in May, but she got sick, and it was just pure luck that I happened to stumble upon the tickets. I originally (and technically still did) want to buy them for Father’s Day, but it was really close to my trip and I wasn’t sure if it would all work out, things happen for a reason they say, and I believe that.

Before she came on, of course there was an opening act, but even before he came on, she had a DJ, KidCutUp, come and and just play a whole bunch of hits. He was pretty good. I had an amazing time singing along… so much so that I was beginning to lose my voice before the concert even started. 😝

Her opening act was this man named Wrabel. I’ve never heard of him, but he plays soft, piano ballads. I believe he played a handful of songs, and he’s got a powerful voice, quite beautiful.

After his set, KidCutUp was back to entertain the crowd once more. Pink was a little late so we had to wait around a bit, but she thanked everyone profusely for her lateness, she was very cute and humble about it.

She came in guns blazing with Get the Party Started, which I was really hoping she would because it seems rather obvious. She came out not just on stage but hanging from a chandelier, swing back and forth AND singing; I’m telling you, she’s a powerhouse. 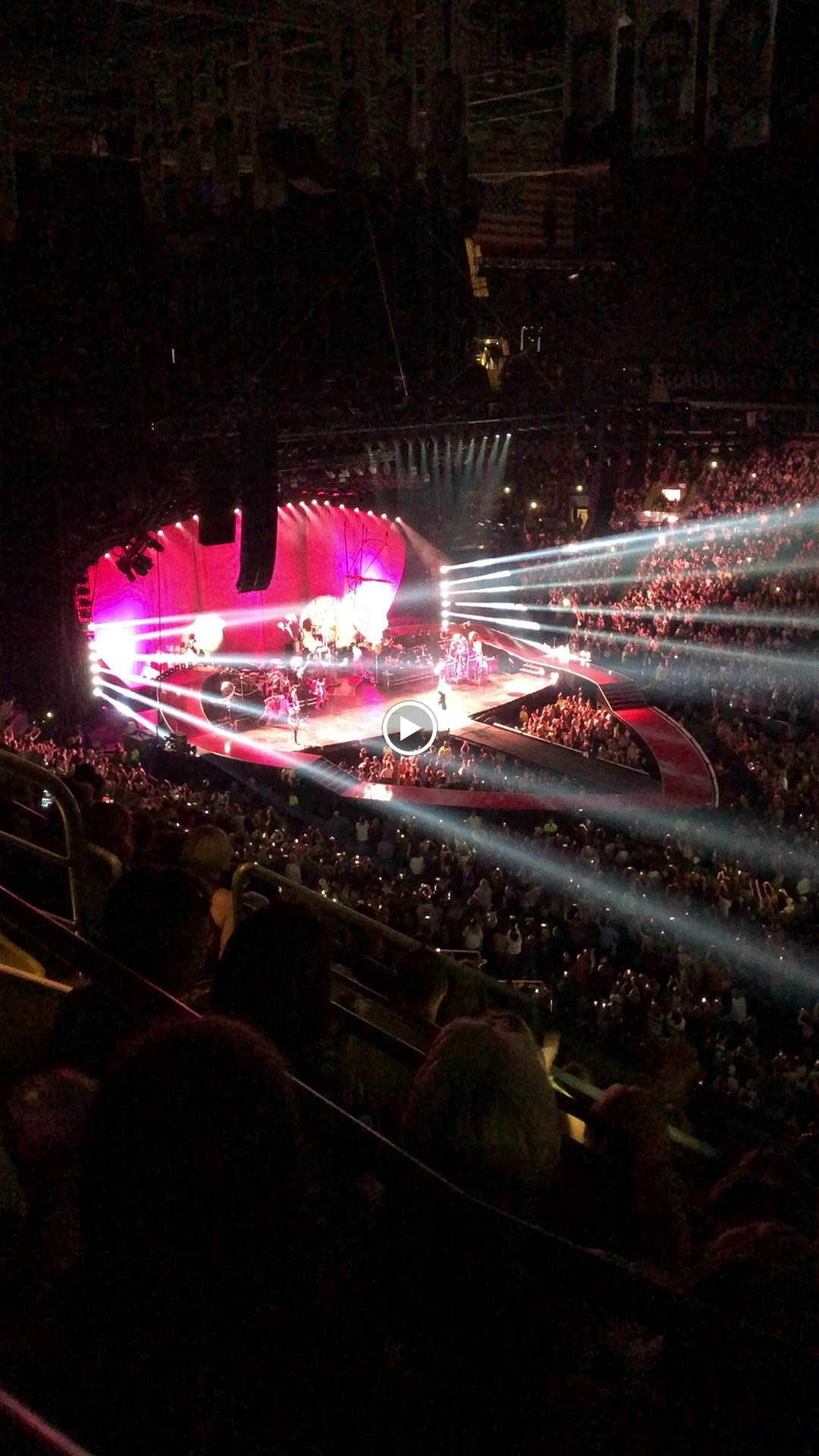 This went right into My Beautiful Trauma; I love that song, it’s so catchy and just makes you want to dance! So, not only can she do these acrobatic moves, the girl can dance too, it’s so much fun to watch her. 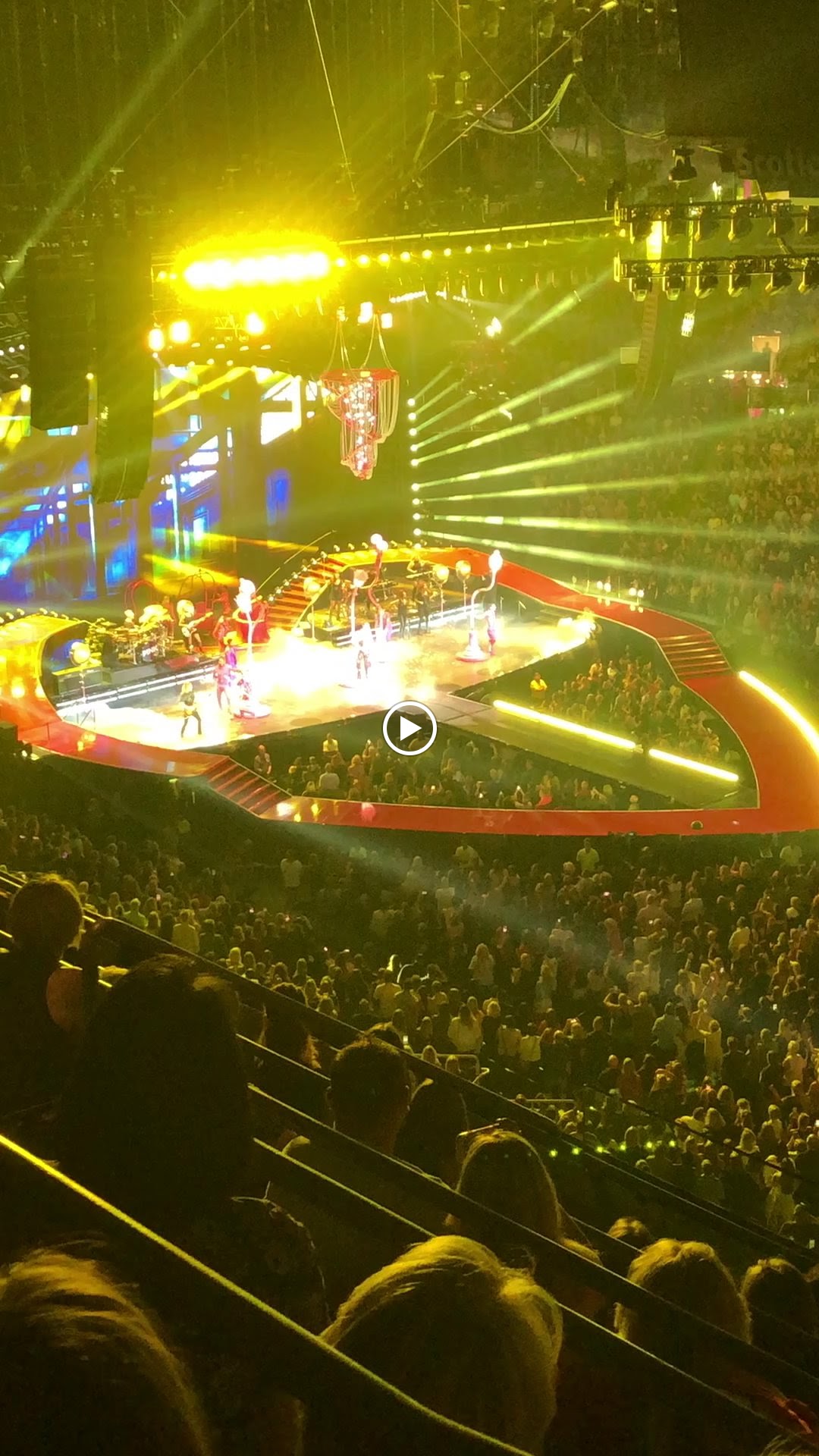 She then had a costume change where she was sort of in the same getup she wore in the music video for Just Like a Pill, the long black robe, as she sang the song. They had this treadmill like track right in the middle to connect all of the stages together and she was lying on it, all of a sudden she starts to move, and I turned to my dad going, how is she moving like that? My dad goes, she’s on a track, ha! 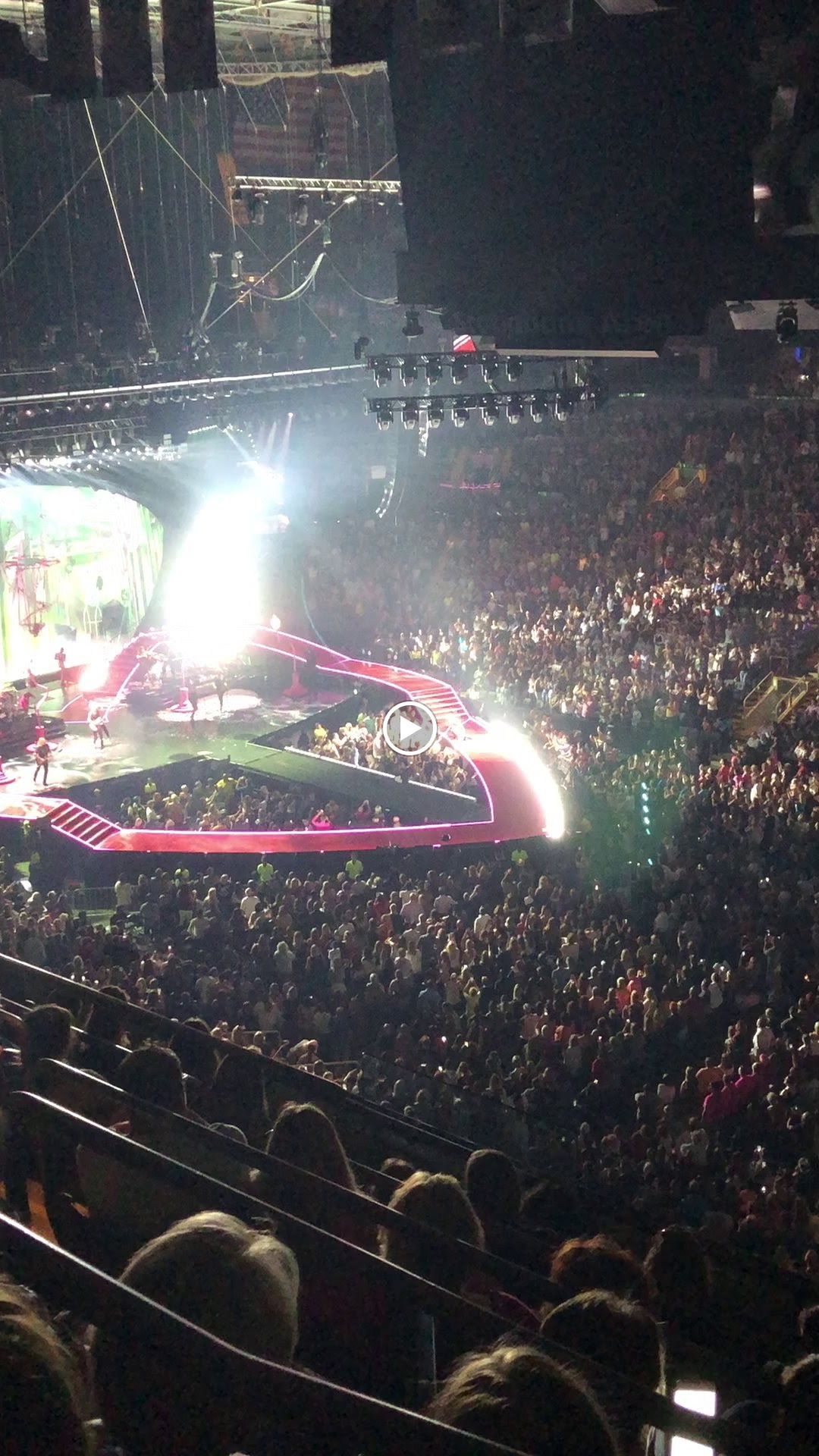 After a brief introduction, and thanking the crowd for being late she then started singing Who Knew.

Then it was time for her first real costume change. That’s when we were entertained by this video called Revenge Land. It was hilarious!

This led right into her song Funhouse, it was the perfect segue. She asked the crowd  if anyone remembers Funhouse, man that’s a blast from the past. Right in the middle she asks ‘who loves Gwen Stefani’ and it turned into a cover of Just a Girl, it blended and worked really well with her own song. 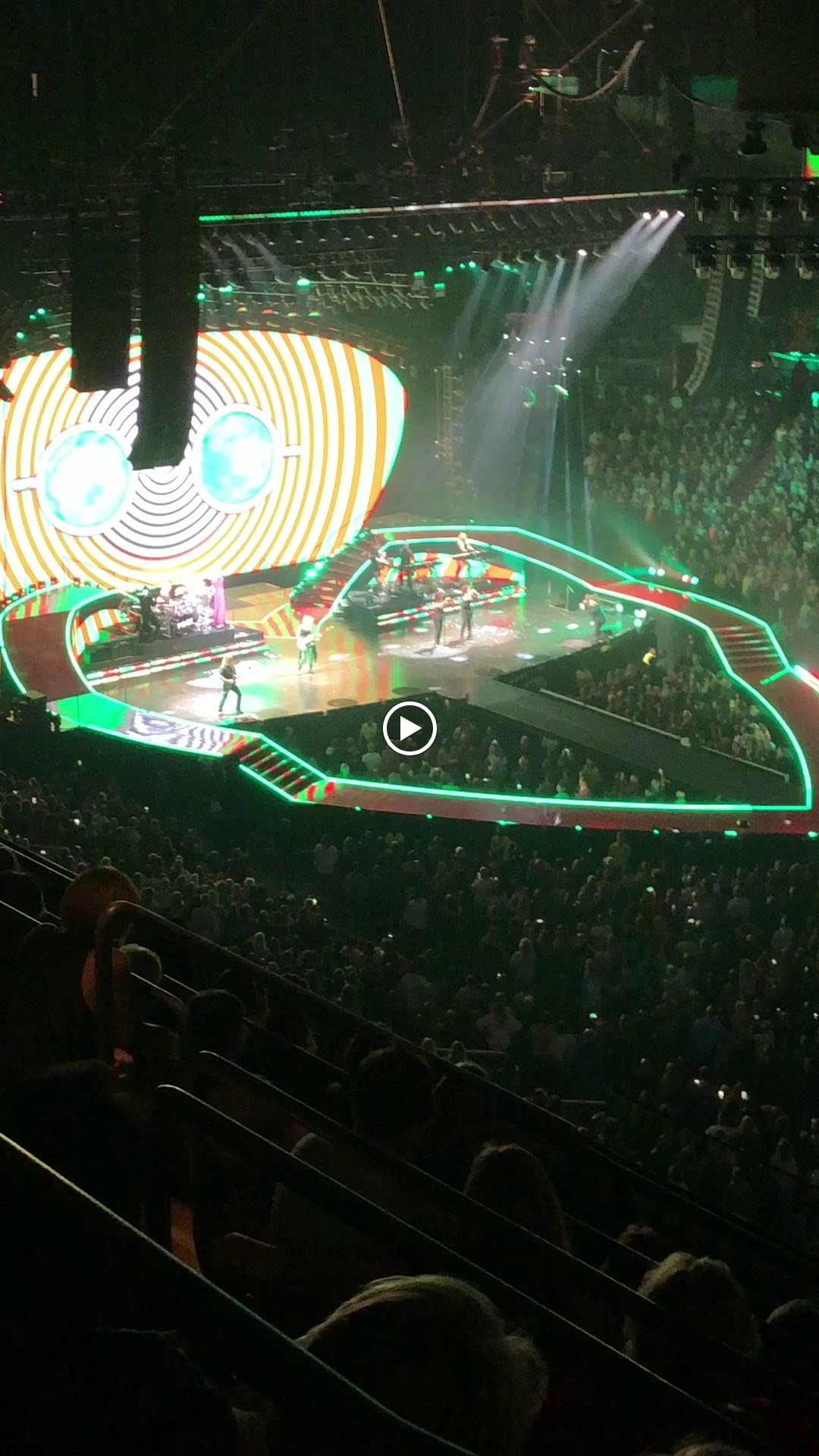 Now that the crowd was warmed up, she introduced the band. Girls got quite the ensemble, she’s got your bass player, guitar player, drums, but she’s got two back up singers, and a violinist, it’s quite impressive.

She then sang a song called Hustle, I’m not familiar with it, but it’s still a good song. This is where she tried to teach the audience how to do a little dance, talk about fun.

Next was a song called Secrets, again I wasn’t familiar with it, but again a good song. 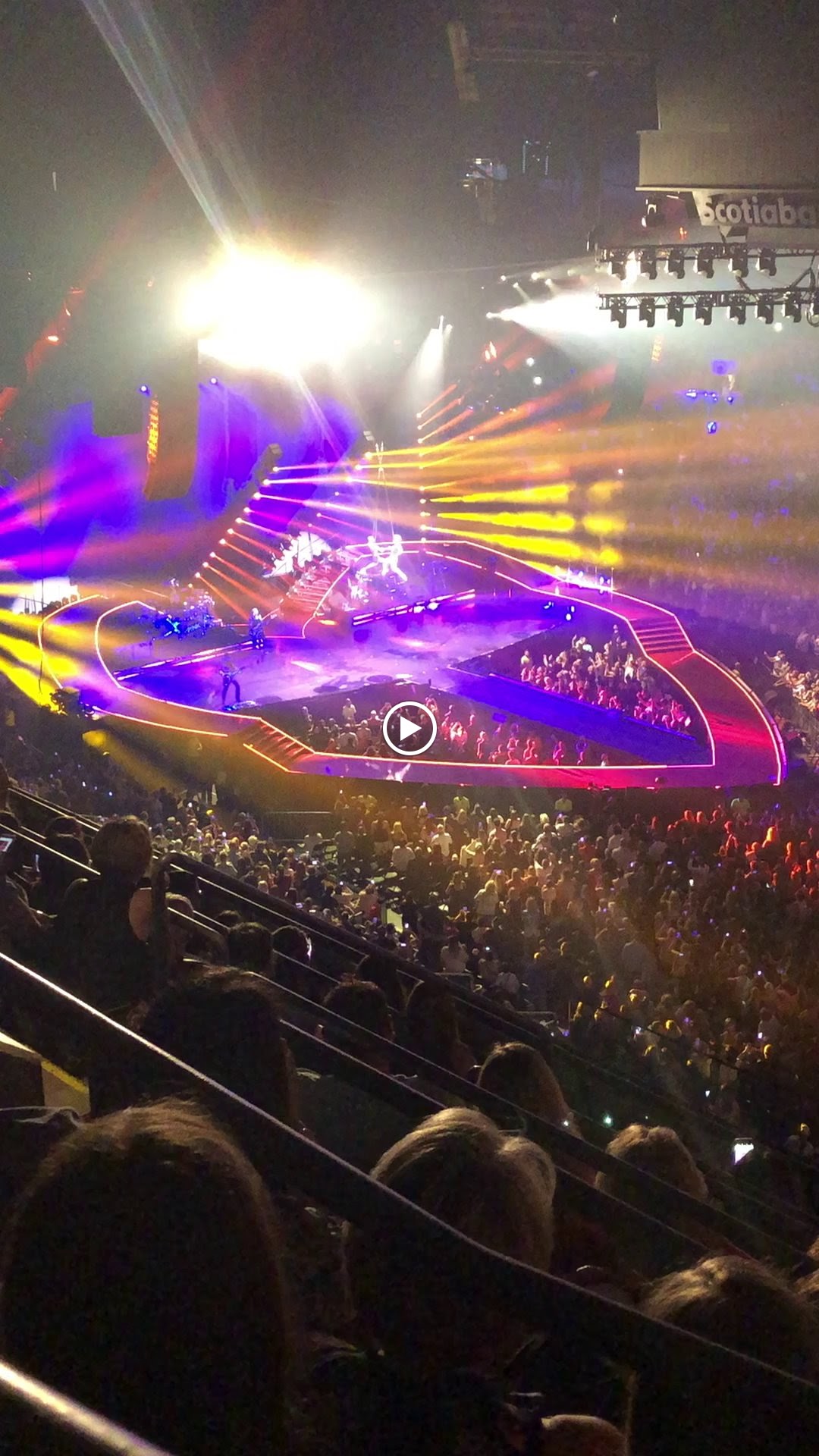 It was time again for a costume change. The screen got dark, and there were trees in the background. Her dancers came out dressed like beasts and holding props. I’m telling you, I thought the Spice Girls had amazing intermission sets, this was pretty cool. The fact that they were dancing with props was amazing. It was like the Beauty and the Beast type thing, but then she showed up wearing a red cape so it turned into Little Red Riding Hood. 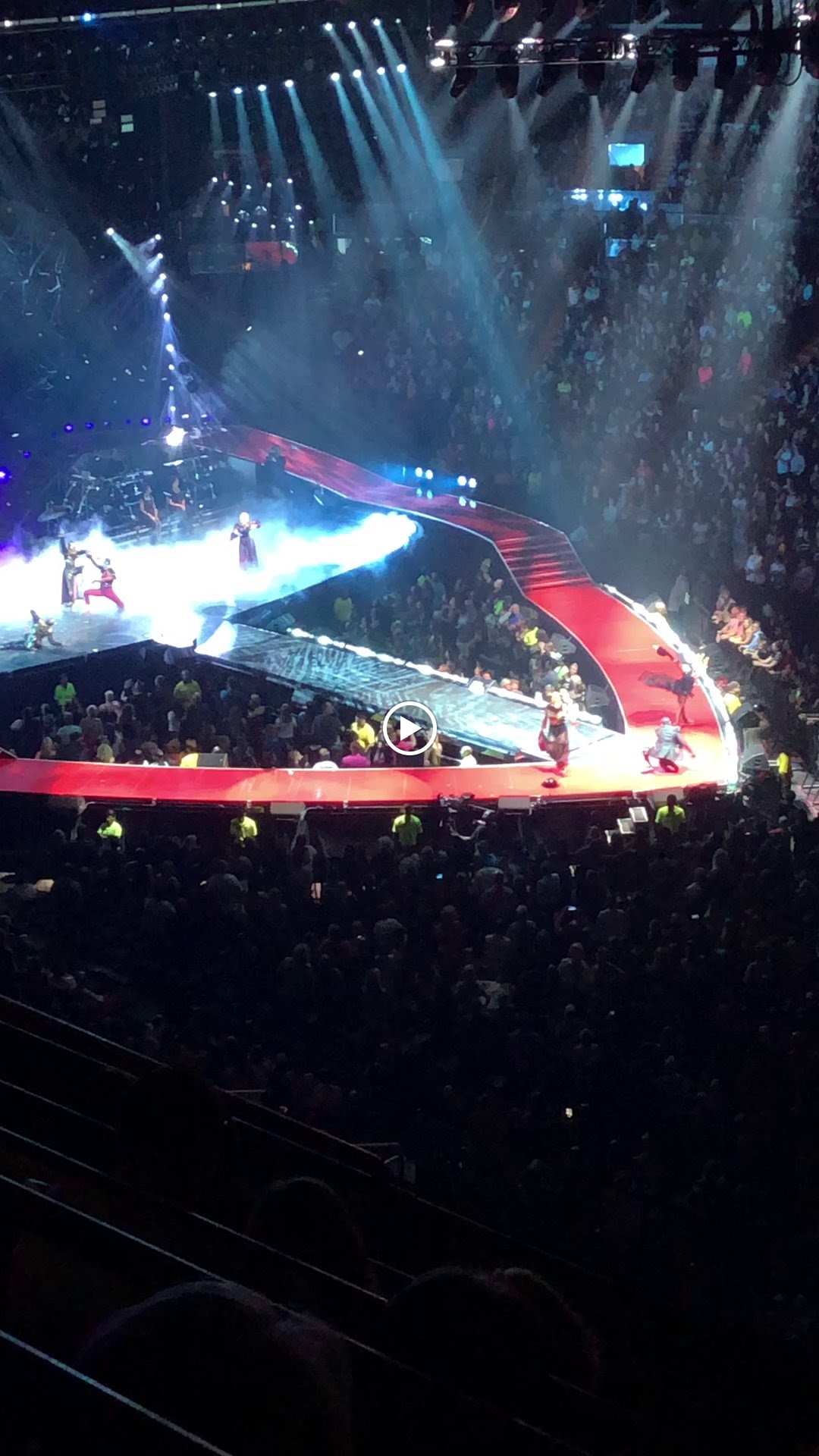 I also loved that her back up dancers got to swing on a wire with umbrellas, I wish I hadn’t cut my gymnastic career short at age 5! 😂

As soon as you heard the soft piano keys, the song was recognizable, and the intro to Try. The whole dance routine, the lovers set was amazing… I am totally overusing this word, it was stunning. It depicted falling in love, even falling in love with the wrong person, falling out of love, oh it was so well done. My words can’t do it justice.

This then led into Just Give Me a Reason. I honestly didn’t think she’d play this because it has Nate Ruess from fun. but she sang it, and she had his part playing from this tv set on stage, it was so clever, I loved it. Huh, it’s a homage to the music video, I was just watching it, and he appears that way for part of it. I still think it was a cool idea especially to play live. 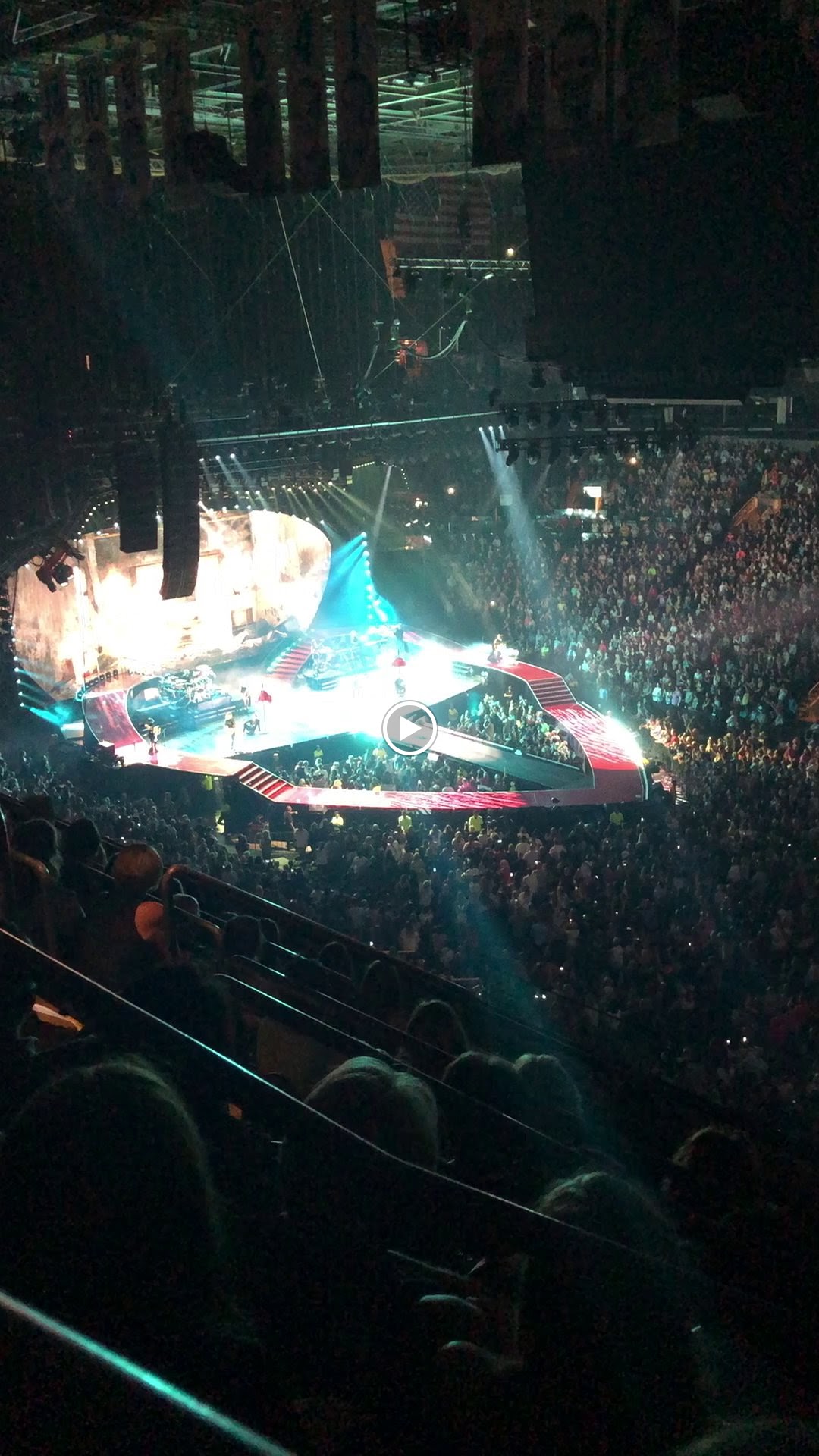 After this, she took a moment to tell the audience the songs she wished she’d written, among them being Baby Shark, haha, but she also said the song River by Bishop Briggs and she covered the song. Definitely a powerful song.

Now that we were riled up again, she went into Just Like Fire, where there was actual fire. The pyrotechs were on fire, literally, with the show. 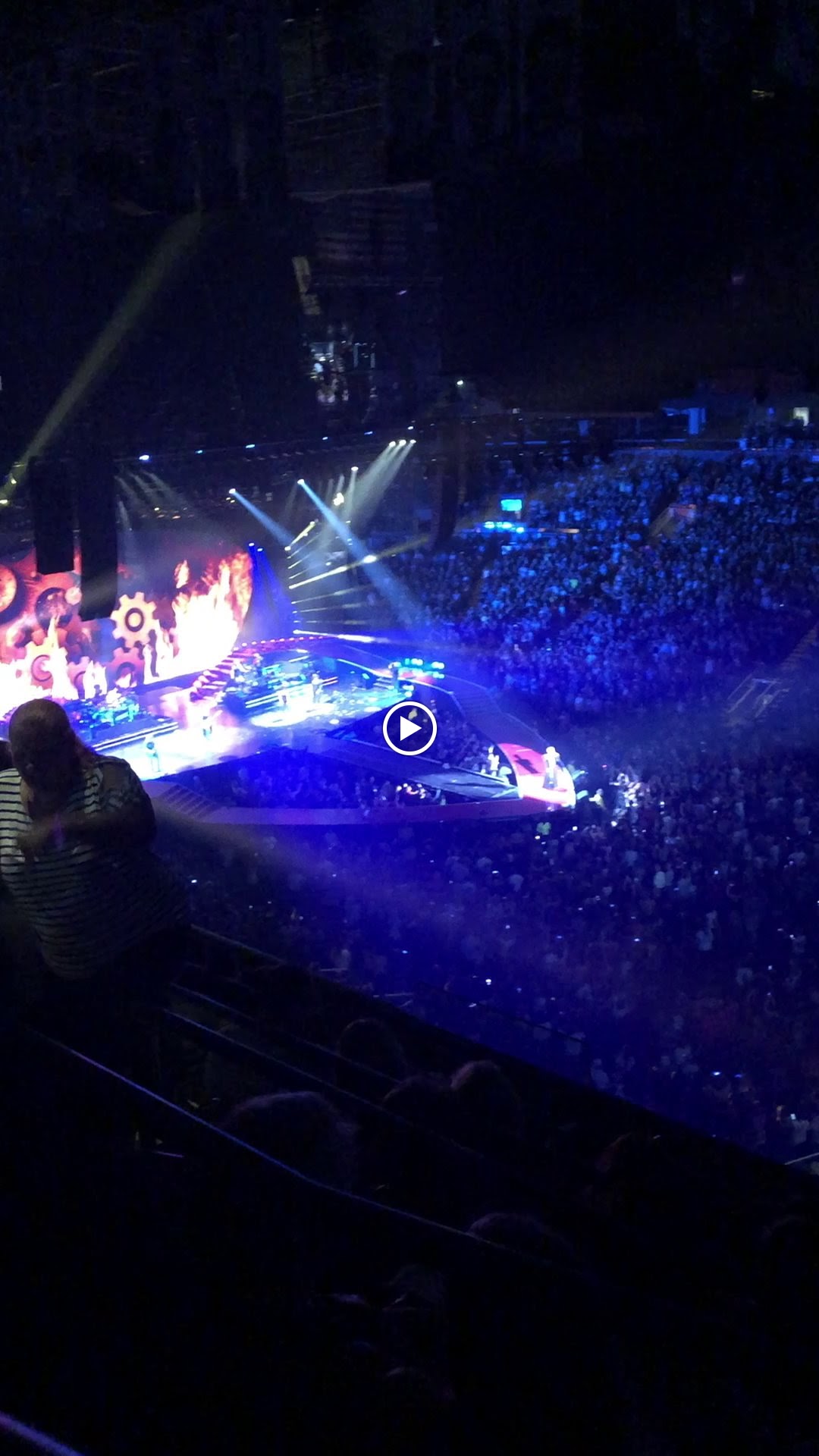 It was costume change time again, and this time it was video called Women are Strong and it’s this video about her story and about learning to love yourself, learning to love the world, to be kind, to give back, to remember where you come from, to not be afraid to be yourself. My god, it was so moving I’m in tears writing this because I’m watching it again, but I was in tears that night because it’s so empowering and it just motivates you and makes you feel good knowing someone with a voice cares and wants to do good in the world. God, she is so humble.

This lead into What About Us, and it was so well done, I could barely sing along because I wanted to cry, but so good, like chills, so good.

When he left, she continued to say she was grateful for the people she knew and she called, of all people, Dallas Green to come on stage. I just about lost it. I love City and Colour, I’m going to see him in November, the two did a collaboration album back in like 2014, and they played a few songs off of it. This is like a dream come true to me. I’ve always wanted to hear some of these songs live. They played You and Me and Unbeliever, where Pink goes, ‘it’s a battle between who’s voice is higher’… and they both can go pretty high. 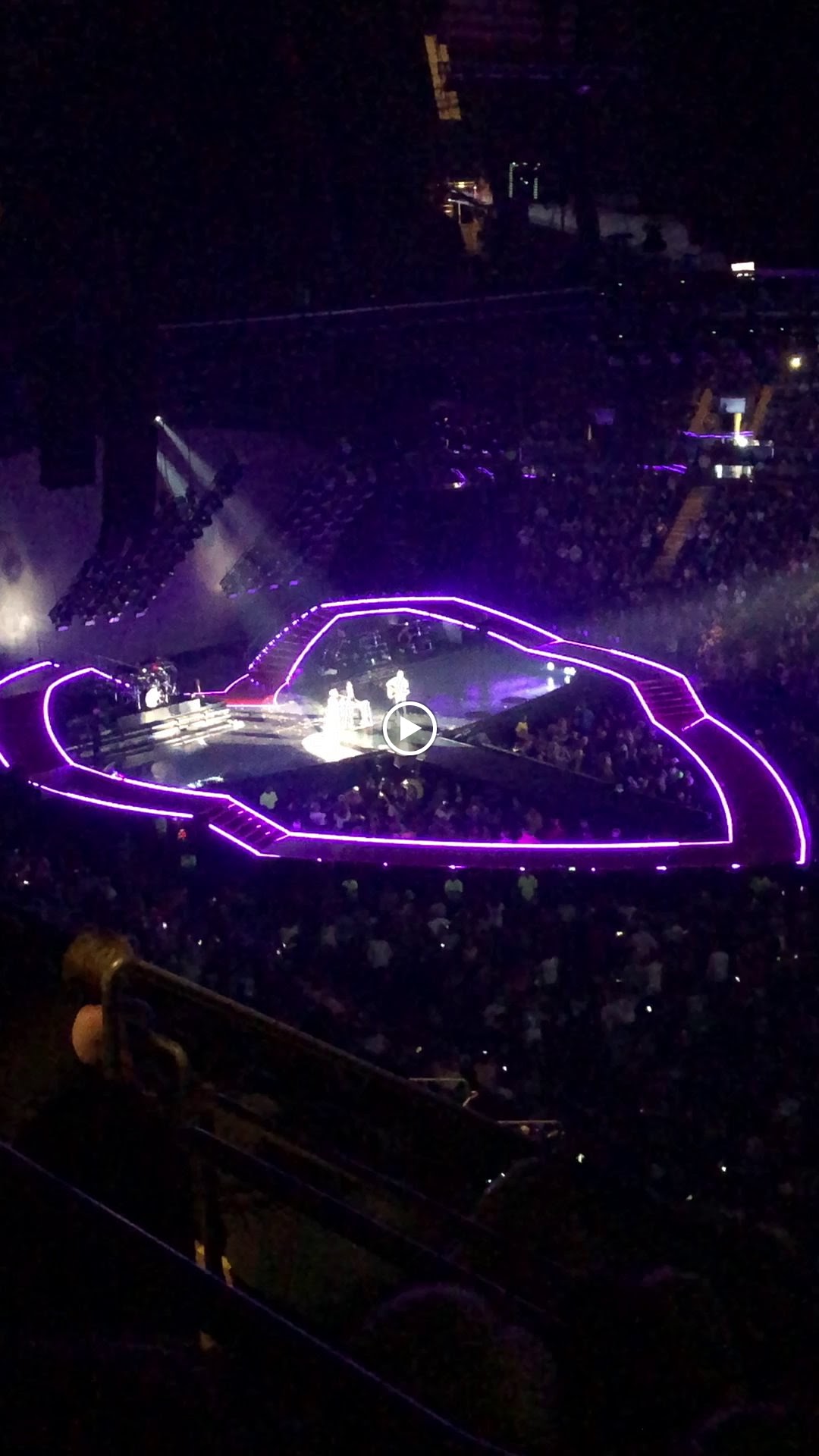 I think that might have been my favourite part of the whole night.

We really slowed things down as she performed Walk Me Home acoustically, where she told the audience her guitarist has 95 guitars and 90 of them all sound the same. 😂She’s really quite witty.
Before she started the song, someone was FaceTime-ing in the crowd and she began talking to the person. We could see this person walking through the house, she tells him, go grab a beer and stay awhile. She thought it was pretty amazing to experience a concert this way. She remarks, he didn’t have to leave the house, park, wait in line, etc.

This then turned into her telling us her next song was good for letting out all your frustrations, and she began playing I Am Here. She had big drums out for this and it was definitely a good jam to jump and stomp around to. I definitely liked this song performed live.

This then led into F*ckin Perfect. I honestly forgot how many amazing, and inspirational songs she has. 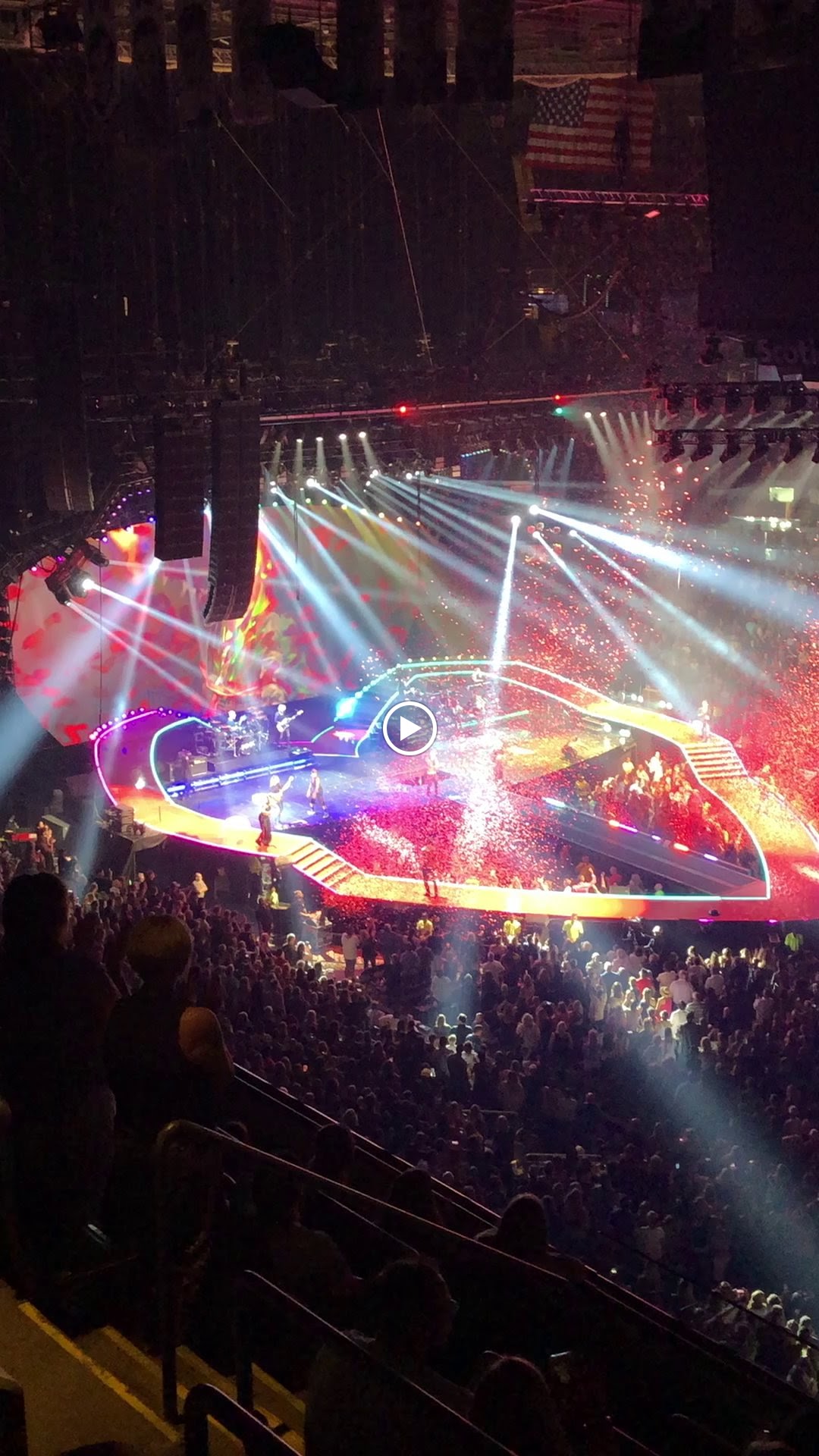 After, the arena went dark and she told us about her daughter who is 6, how she’s being bullied for looking like a boy, and so her response to this was to make a powerpoint presentation, I thought that’s actually really smart. She made a presentation about all sorts of artists who were being true to themselves without caring what others thought of them, to the likes of Prince, David Bowie, Elton John, etc. To show her that you don’t change for people, you take what was given to you and you flaunt it, you show the world what beauty is. Ugh is was so beautiful, just watch the video I linked, I can’t do it justice writing about it.

This led into Raise Your Glass, which moved into Blow Me (One Last Kiss). Yelling the words to that song is honestly a little therapeutic… well let’s just say the whole night was therapeutic.

She sang a called Can We Pretend, I believe it’s off her newest album, which I’m not familiar with.

Just when the night is simmering and you think it can’t get any better, it does. She comes out in a sparkly leotard, wrapped in wire. So What started to play, and just as the chorus begins she launches herself into the crowd. The girl is flipping upside down and everything AND still singing. If that’s not talent, I don’t know what is. She performs the whole song while bouncing and flying around the arena. 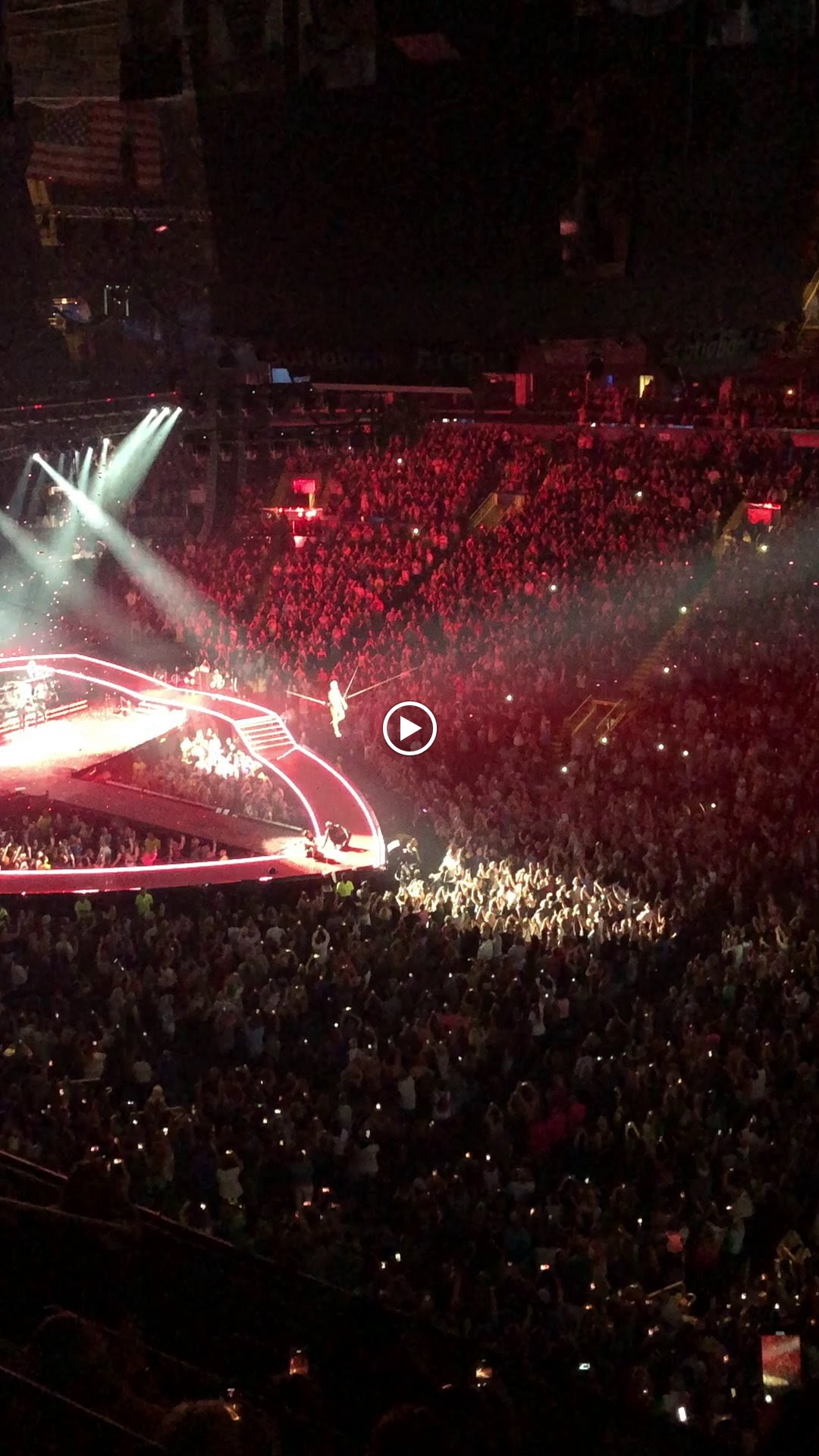 Again, after that performance you think damn, that’s how it all goes down, pretty amazing. But she comes back out, the arena is dark, spotlight on her, she’s got baggy jeans and a shirt on, she looks so down to earth, like any ordinary human, and she sings Glitter in the Air, and it encompasses the whole night. The lyrics speak so true, and really showcase the evening.

Uh, honestly I tried to really encapsulate the night because it was just so special. It was so worth it, I would highly recommend seeing her, even if you aren’t a fan, I’m sure there would be something to take away from her.

I hope you enjoyed this, look out for my photo blog Friday!