Hi guys! I can’t believe it, typing up these words, it makes me sad because now my trip is completely over. I’ve had so much fun putting all these posts together. I hope you have enjoyed reading them and maybe gotten something out of them. Alright, for the last time (until my next trip 😝) here is everything I did in Liverpool and Manchester.

Continuing on our day trips throughout the week. On Wednesday, June 19 my friend and I hopped on the train early and got to Liverpool around noon. The weather was sunny, which left us feeling good because leaving Leicester it was raining (the usual).

We walked to the closest (or what we thought was the closest stop, it took us some time to find it since it wasn’t off a major intersection) hop on stop to grab the hop on/hop off bus. Our driver was hilarious, he had to point out my friends scarf (it was the wrong soccer “football” colours and she got hounded for that, but in all good fun) and an overall good time.

Our first stop was the Metropolitan Cathedral. There is supposed to be this extremely beautiful view looking up through the stained glass windows, unfortunately we didn’t get to look around the Cathedral because there was a church service going on, but we did walk around the outside and it’s quite lovely to look at from the outside as well. 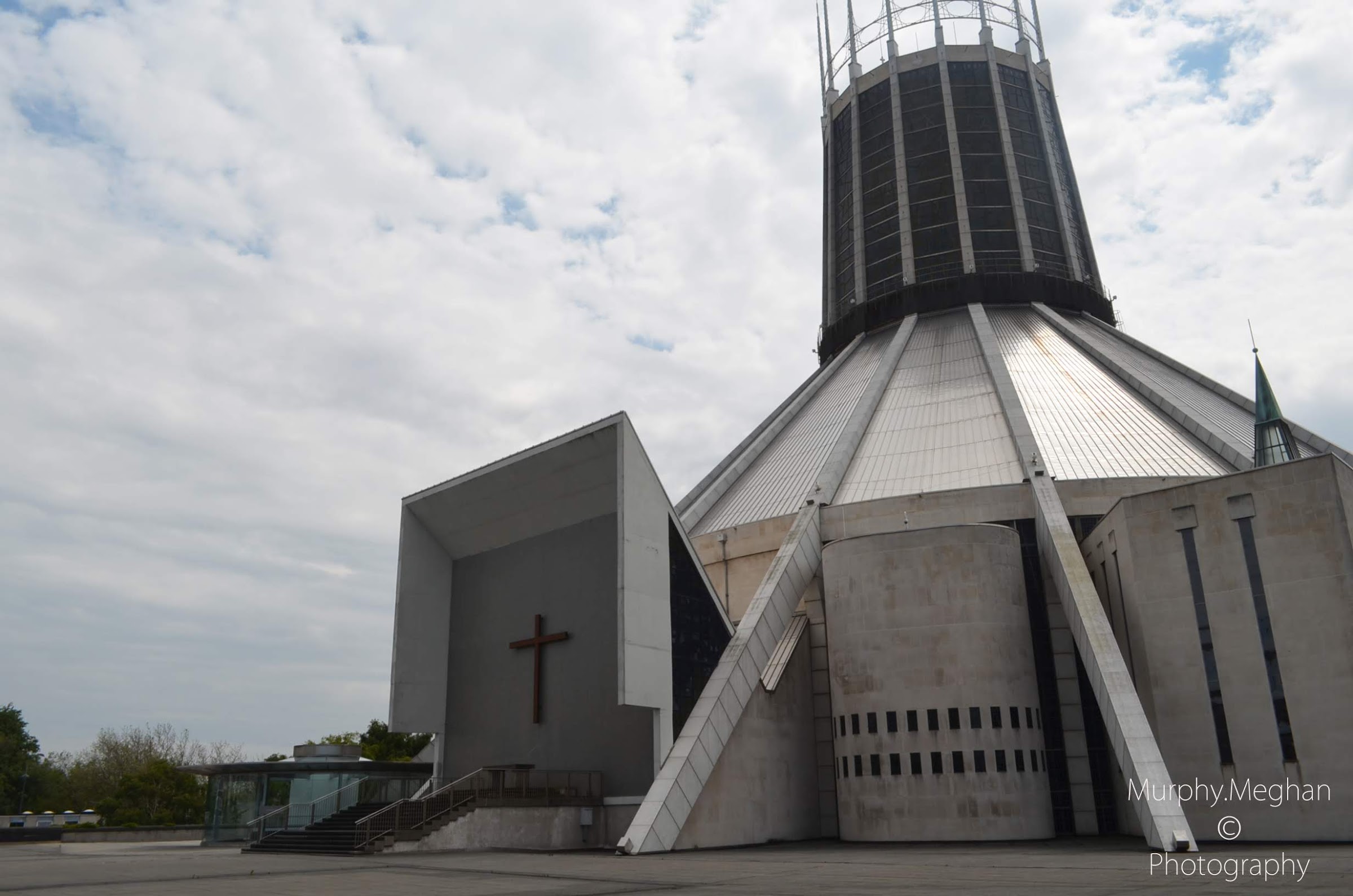 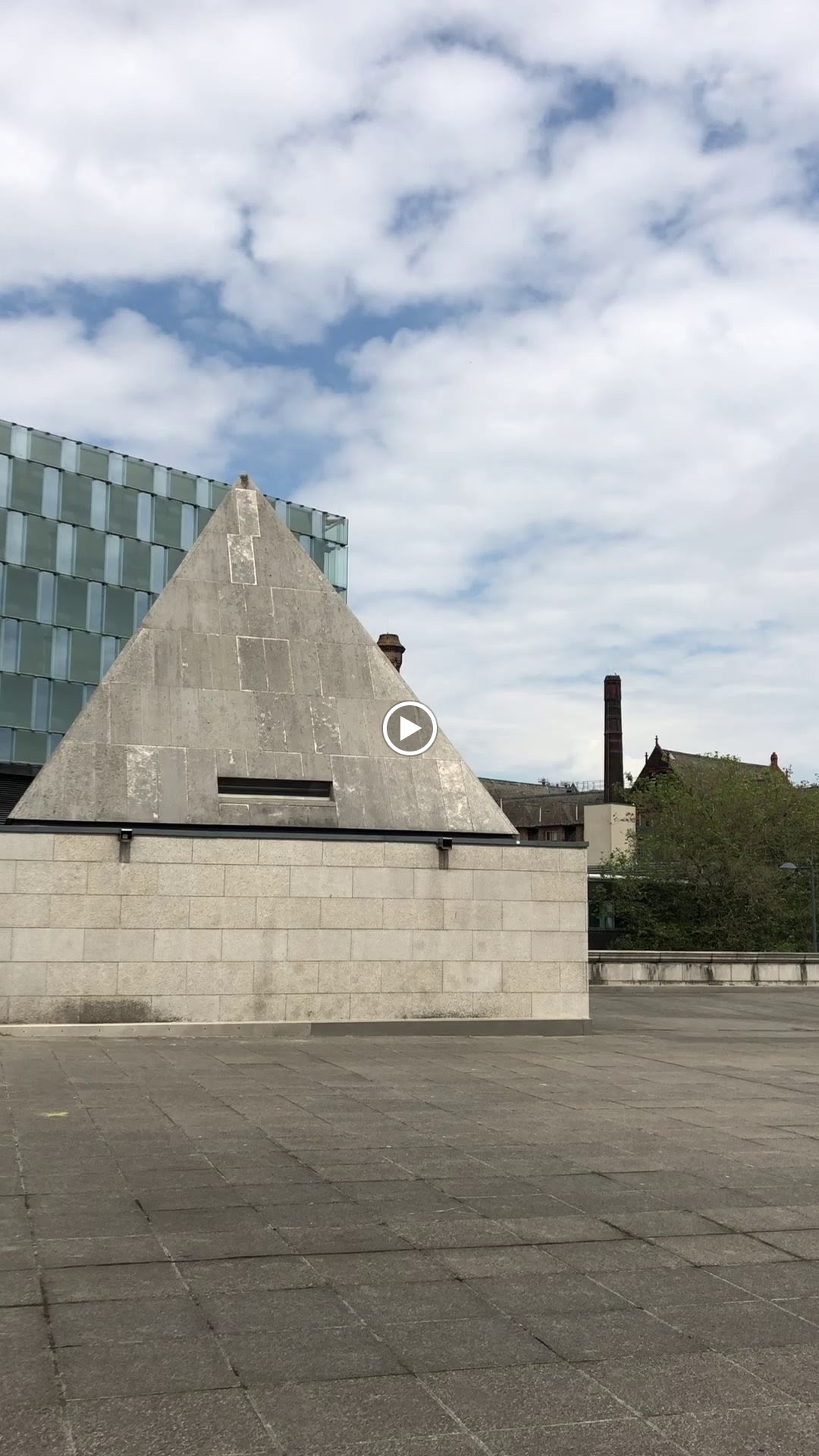 We stayed around until the next bus showed up to hop back on. We rode it all the way to stop one where we got off and decided to walk around because they have this beautiful waterfront.

Liverpool is very famous for its music, especially the Beatles. Walking around you’ll notice there is a lot of mention of them. There is even one hotel that has statues of the four members on the outside. There is of course a Beatles store, which my friend and I did go into to look around, there is a lot of merch in there. 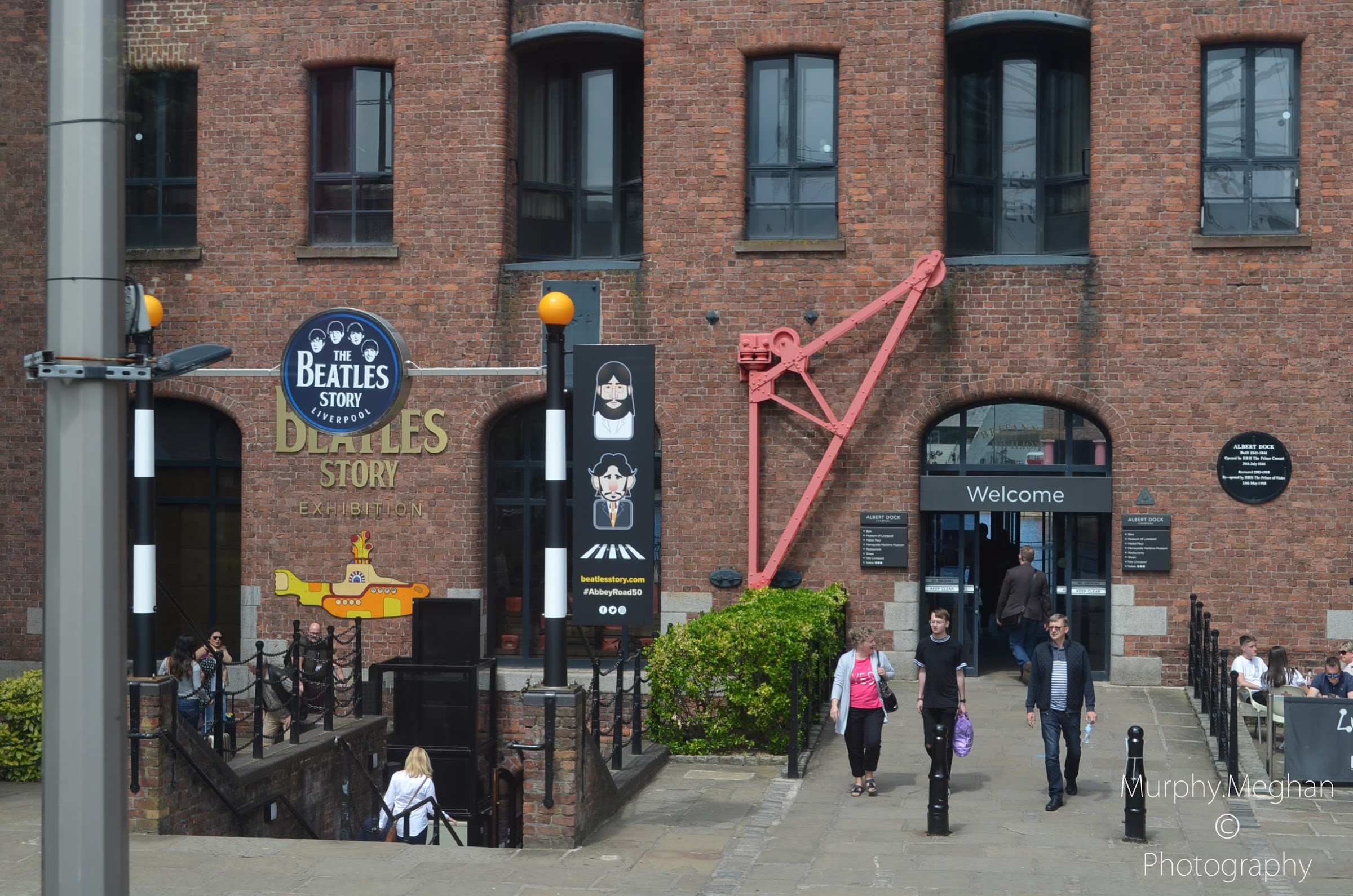 We decided to stop for lunch as well. I saw this sign for waffles and lunch called Puffle Waffle, only finding the entrance was a challenge. We walked around the whole dock before going back to where I saw the sign, only for it to be tucked away in this corner. The place wasn’t very big, but the waffle was amazing! I couldn’t recommend it more. If you’re a fan of waffles, these are light and airy (because they do look like bubble wrap 😂) and then you can load it with what you want, uh so good! I had whipped cream, strawberry sauce, Nutella and bananas! 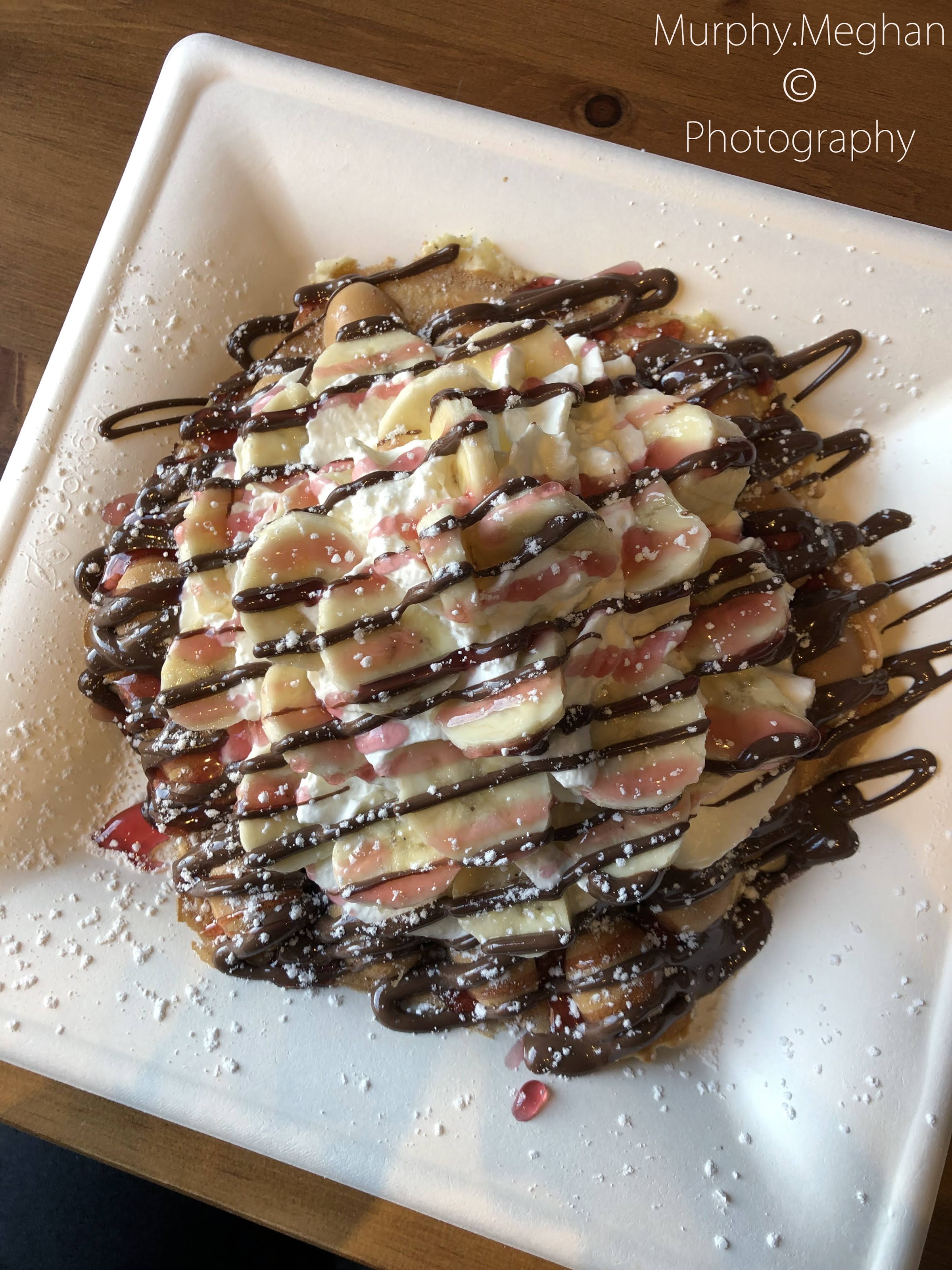 After eating that we walked around a bit more, and decided to get back on the bus and guess what, our same driver from earlier was back, and of course he recognized us. As he was pulling up he was pointing at my friend and her scarf, such a funny dude. Then the tour guide was poking fun at the way she was eating her fries “chips” she just couldn’t win. Liverpool people are something else, truly made our day.

We rode around until we got to the National Museum of Liverpool. It’s 5 floors and looked really awesome, again free to go into. I wish we had more time there. The museum closed at 5 and it was close to 4:30, and my friend has family from Liverpool that we were going to meet up with soon. Just as we walked in and were about to go to the aquarium her uncle was at the station so we had to leave. 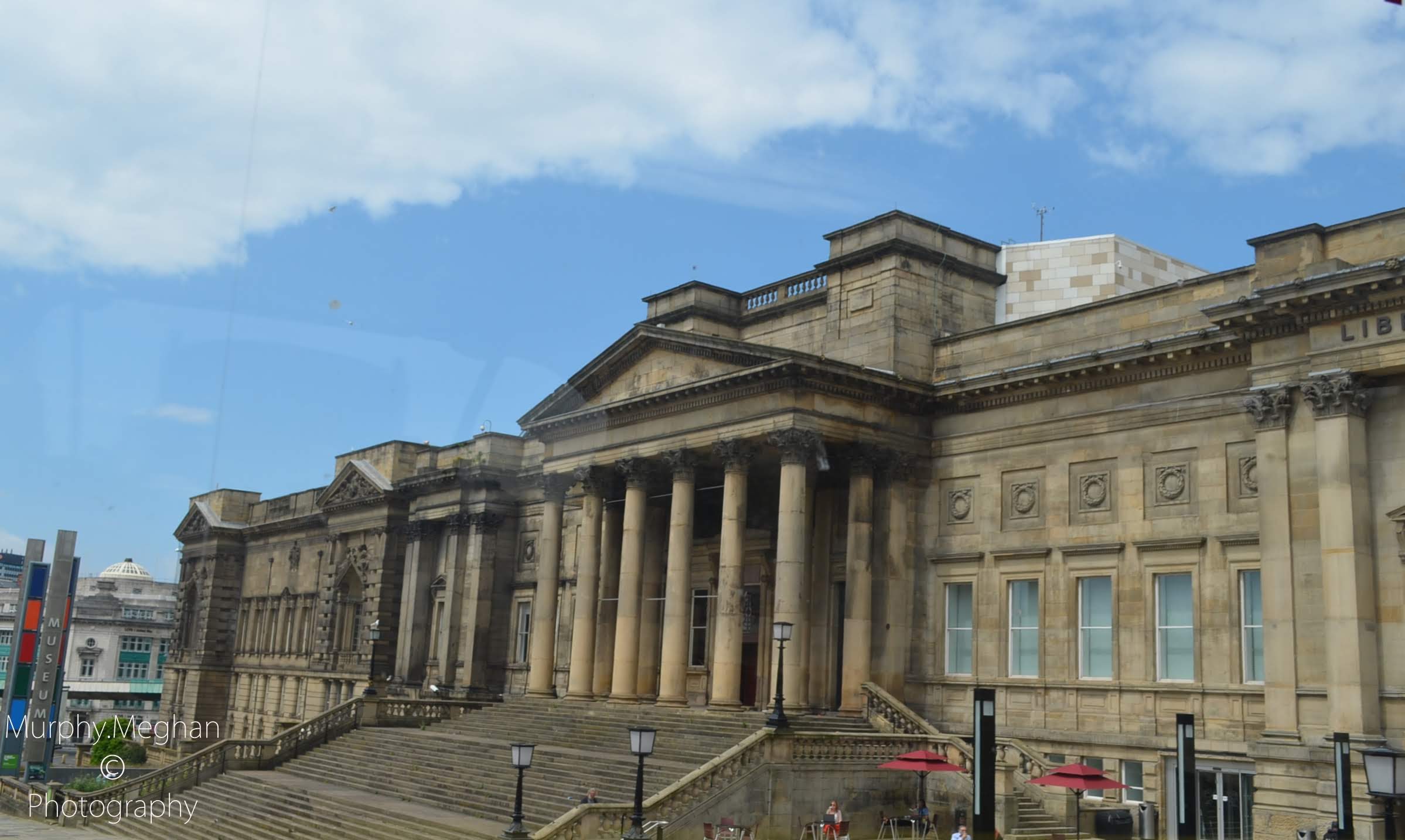 Her family was really nice, we ended up just going to a McDonalds for a bite to eat and quick visit.

Afterwards, since we had time to kill before heading back on the train, we found a walking distance Waterstones. This is where I ended up buying the last of my books from this trip. I bought Eliza and her Monsters by Francesca Zappia and The President is Missing by James Patterson & Bill Clinton (for my mum) on a buy one get the other 50% off deal. All in all, it was a great day!

The next day, Thursday, June 20, we were both up early and met at Gregg’s for the last time, very bittersweet. Every morning on the trip we’d meet at the coffee shop Gregg’s and grab something for the train ride. The supervisor who worked there was weird. The first time I ordered something there he mumbled something on top of his accent about something being free, I just said no because I still couldn’t make it out what he said the third time. On our last day, my friend got the same experience, glad I won’t have to see him again, it was super awkward.

We got an early train and were in Manchester before noon. What I love is they have 2 free public transit routes that take you a short distance around the city, so if you’re not going very far from the train station it’s super convenient. We hopped on one to take us closer to one of the hop on stops.

Unfortunately the downside to the city their hop on bus comes every hour to each stop, so you really gotta plan where you want to go because you’re pretty much stuck there for an hour if you don’t like it.

We got on at the last stop, in which we missed a bus and had to wait an hour or so for the next one. That really ate into our time. We got on, it was 6 £ (they classified us as students, even though I’m not… and if I’m being completely truthful my ticket ended up saying senior instead of student, good thing I didn’t have to show it again 😂) for a ticket in which my friend technically rode for free since she paid cash and he claimed that my card was charged twice, which it wasn’t. 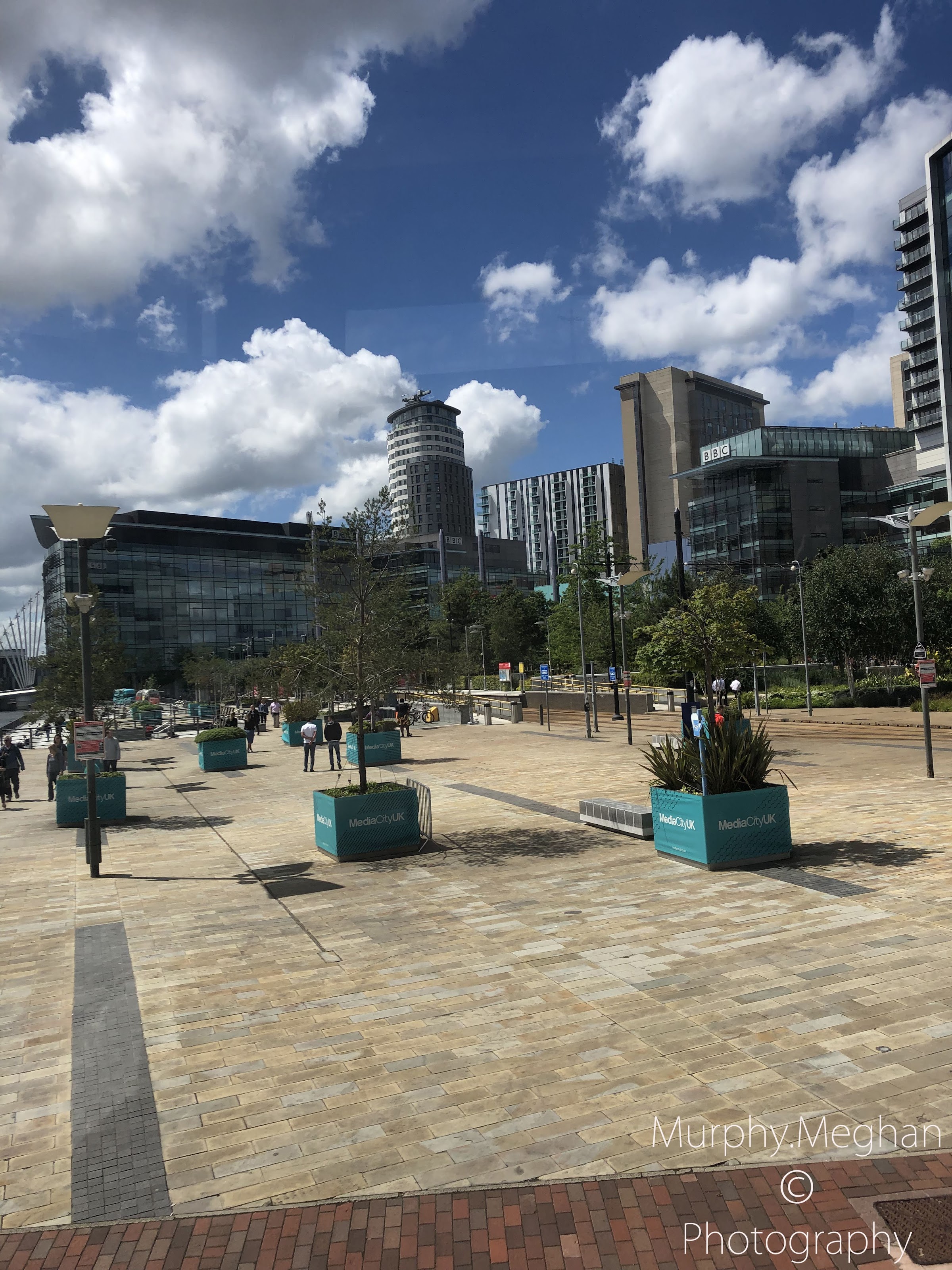 We rode the tour all the way through. We were going to get off at a few stops, but we realized that we wouldn’t have time, then our train was at 4:30 I believe, so we didn’t get to see everything we wanted to see. I would have liked to stop at Media City (seeing as I studied media) and my friend wanted to stop at the Manchester United stadium. Instead we got to see them from the bus. 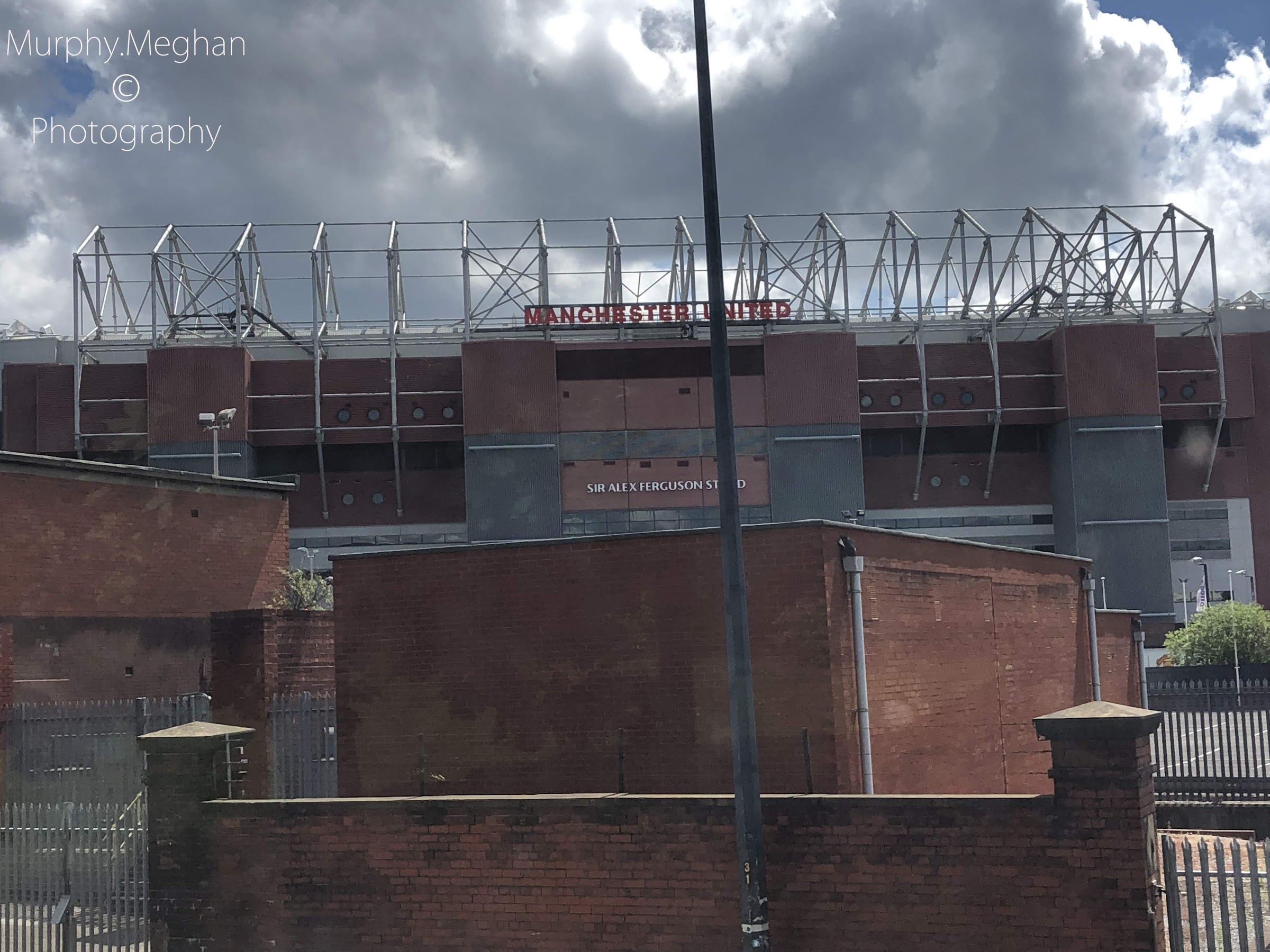 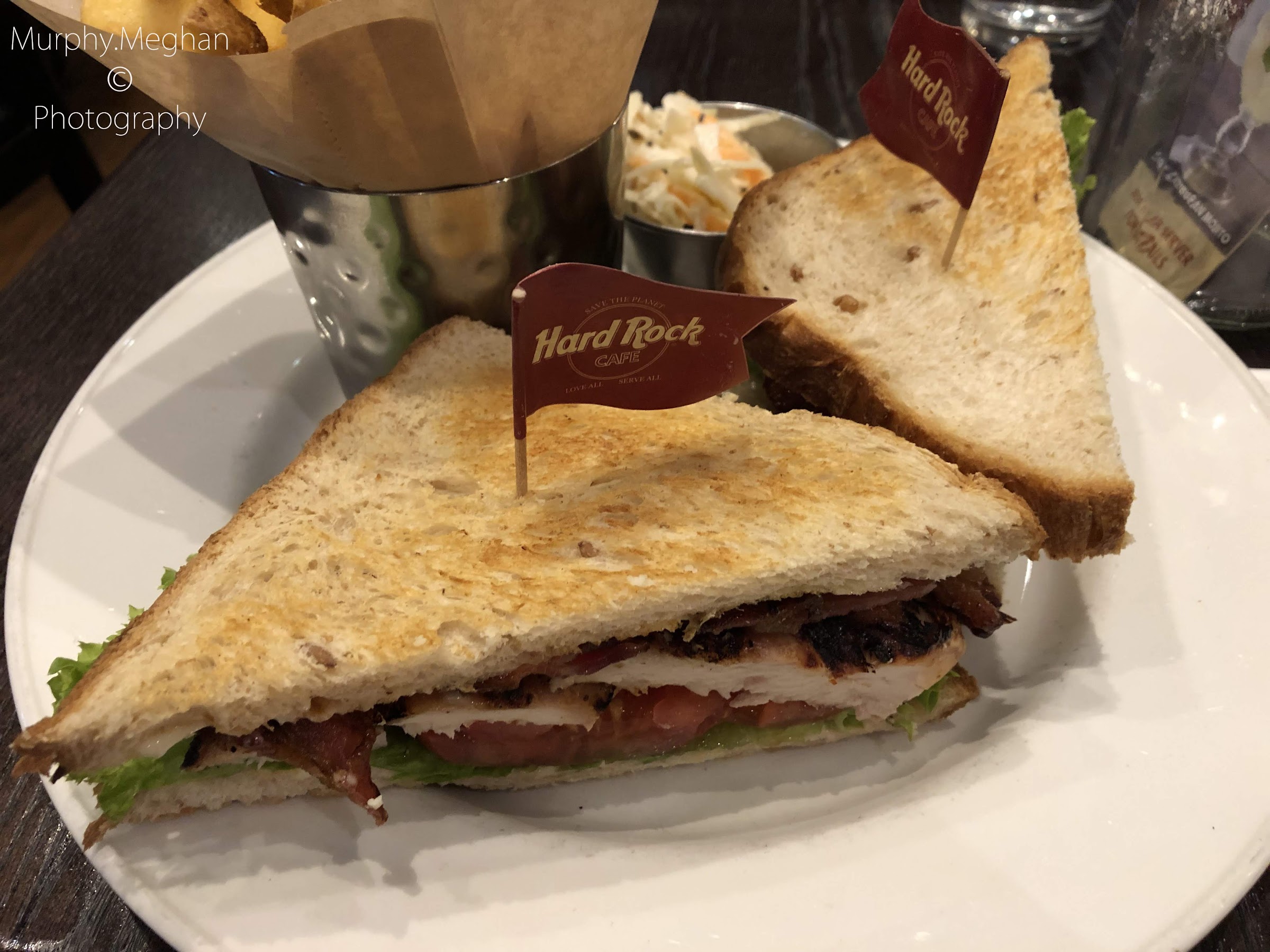 We got off at stop one and we walked around. I made sure to check out the bookshops before we got to the city and so after we ate at the Hard Rock Cafe so I could pick up more merch, we stopped and looked in some shops. I didn’t find anything worth buying and the shop we really wanted to go to, Paramount Books, was closed. It’s only open on the weekends. We did go to Manchester Book Buyers, we walked into Chapter One Books but barely looked around, we couldn’t really find the books, all we saw was the coffee shop, cute aesthetics though.

I feel like we may have spent too much time also trying to find a souvenir shop so by the time everything was said and done we were too far away from the train station and we missed our train. Now, if we knew then what we know now, our day would have been so different; we would have had time for more things. We found out that if you miss your train and it’s a non-peak period train all you have to do is get on another non-peak train. Why is that a thing? And why isn’t that public knowledge? That left us feeling crappy that we could have done more, but alas, it is what it is. We made our way back to the station and got on another train. 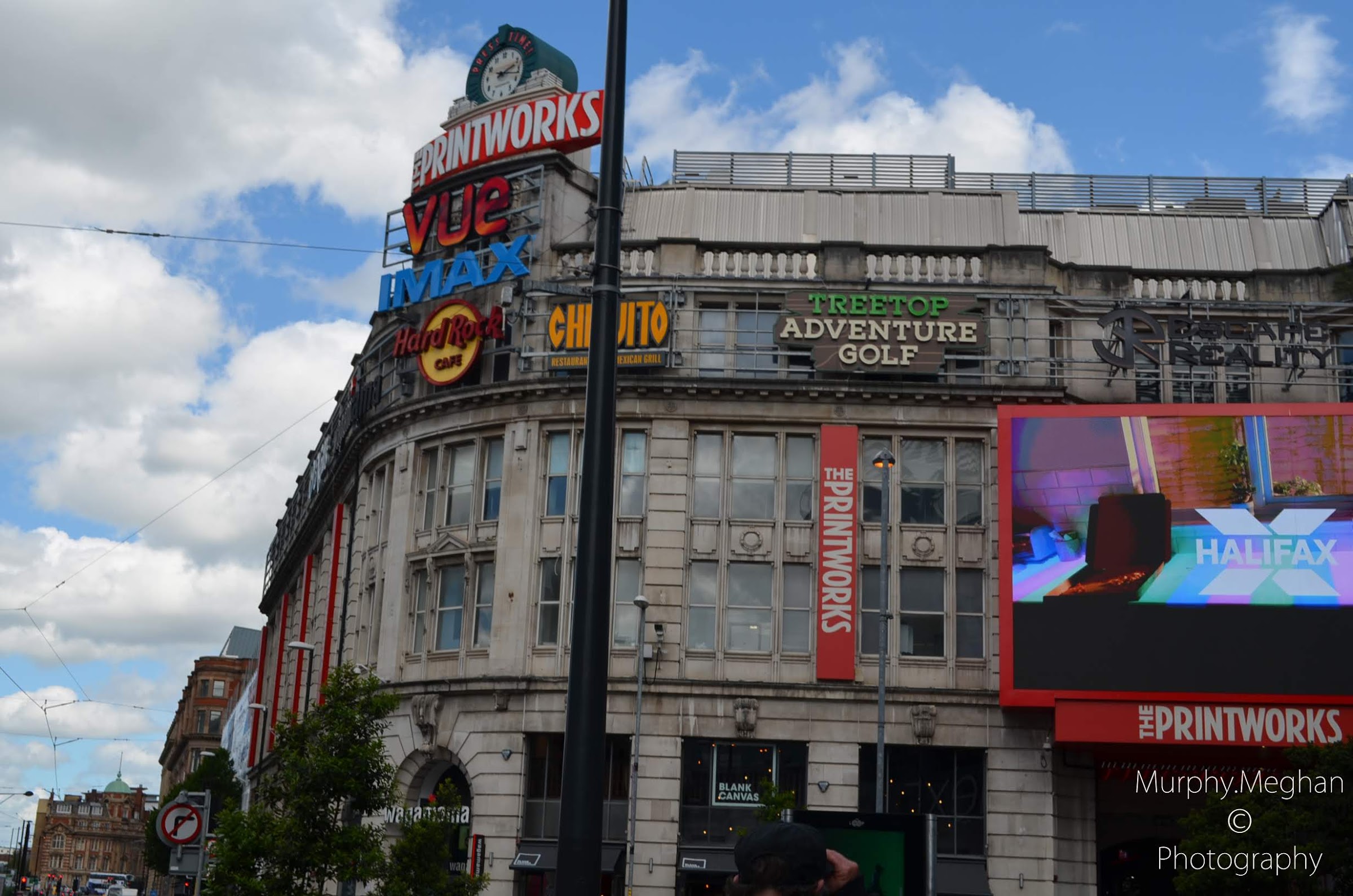 For our last night we went to Nando’s one last time.

And that’s a wrap! The Friday I left real early because I had a good 2 hour commute to the airport (Leicester station to London St. Pancreas. Then London St. Pancreas to Gatwick Airport). Gatwick is huge, but I had enough time to catch up on blogs while I waited 😂. My flight home felt long, but that’s just because I was excited to be home. I was lucky, no one sat next to me! 🙂

I hope you enjoyed these posts, be sure to check out the last photo blog this Friday!

2 thoughts on “Take Me Back… A Travel Guide to Liverpool & Manchester, England”