Hi guys, happy Tuesday! I can’t believe I’m down to the last few posts of my trip! Where did the time go?! Today I’m going to be sharing with you what we did in both Oxford and Brighton, England.

I left off the night of the concert where we missed our bus home and had to wait for the next one at 2am. We got back to Leicester and to my friend’s place around 5am. That is where we crashed.

Sunday, June 16 was literally a day of relaxation and doing nothing. I checked into my hotel (Premier Inn) in Leicester, grabbed food and watched Rick and Morty. My hotel was very spacious and very nice. It was located right beside the train station so getting on the train every day was super easy!
My friend and I planned our trip for the up-coming week, which brings us to 1) late night ice cream treats and 2) Oxford! 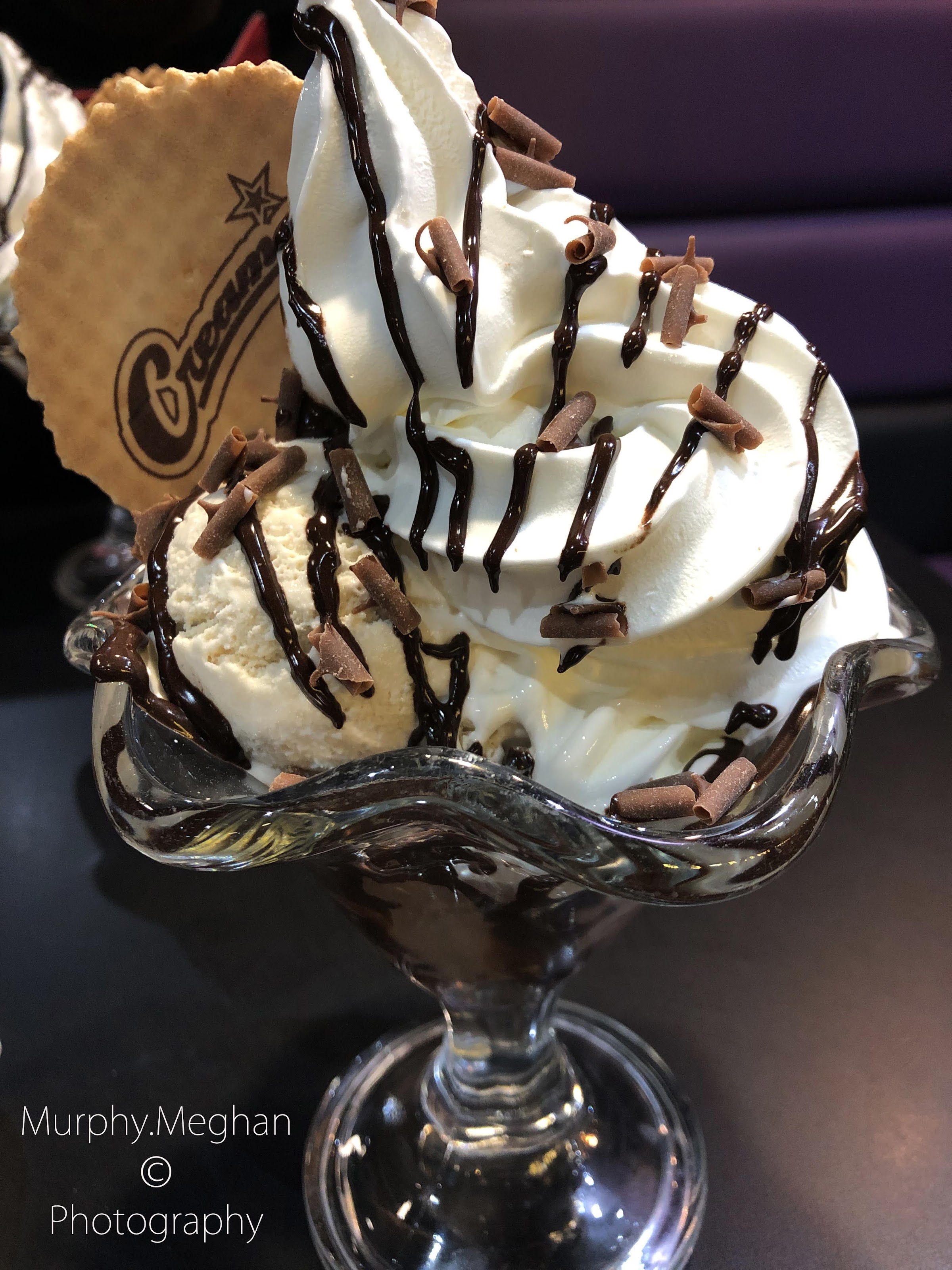 Our first city we decided to spend the day was Oxford. I heard it was a very bookish city and boy was that ever true. I think many authors are from Oxford and they have the highest amount of published books. It’s also definitely a college town, full of academia. 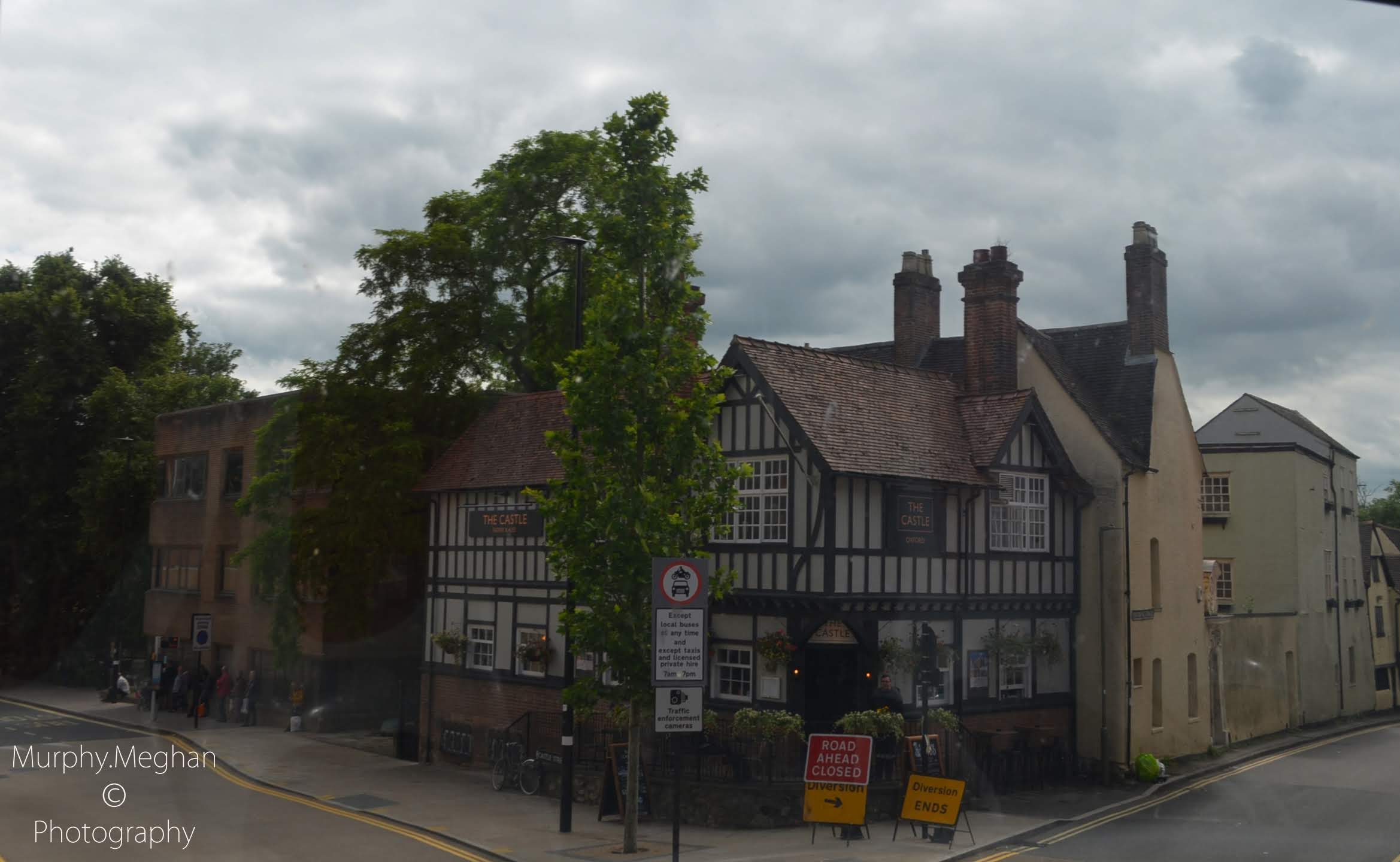 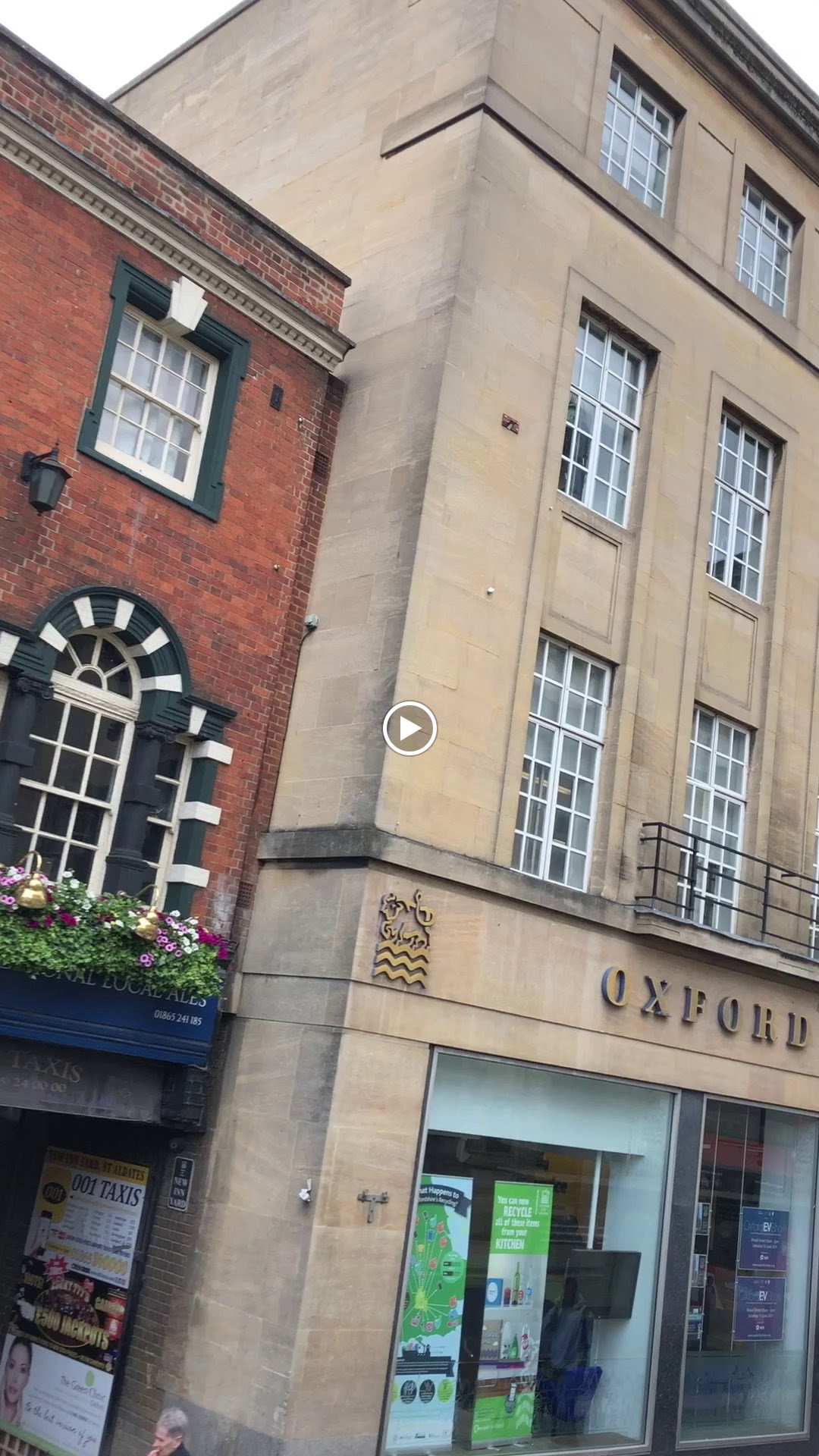 We took a noon train on Monday, June 17, which was about a 2 hour commute, and we arrived around 2pm. They have a hop on stop right outside the station which was perfect, really made things convenient. I believe it was 16 £ for a ticket and away we went. We decided to ride around the full loop to see where we would like to get off. After, I believe it was a good 45 minutes to an hour. We decided to get off to go into the Alice in Wonderland shop. I don’t know how much my friend is a fan, but I was super excited. I should have bought something, even if it was the tiniest thing, oh well. It was still fun to go in. It’s this really tiny shop that is just filled with every type of memorabilia you can think of for Alice. 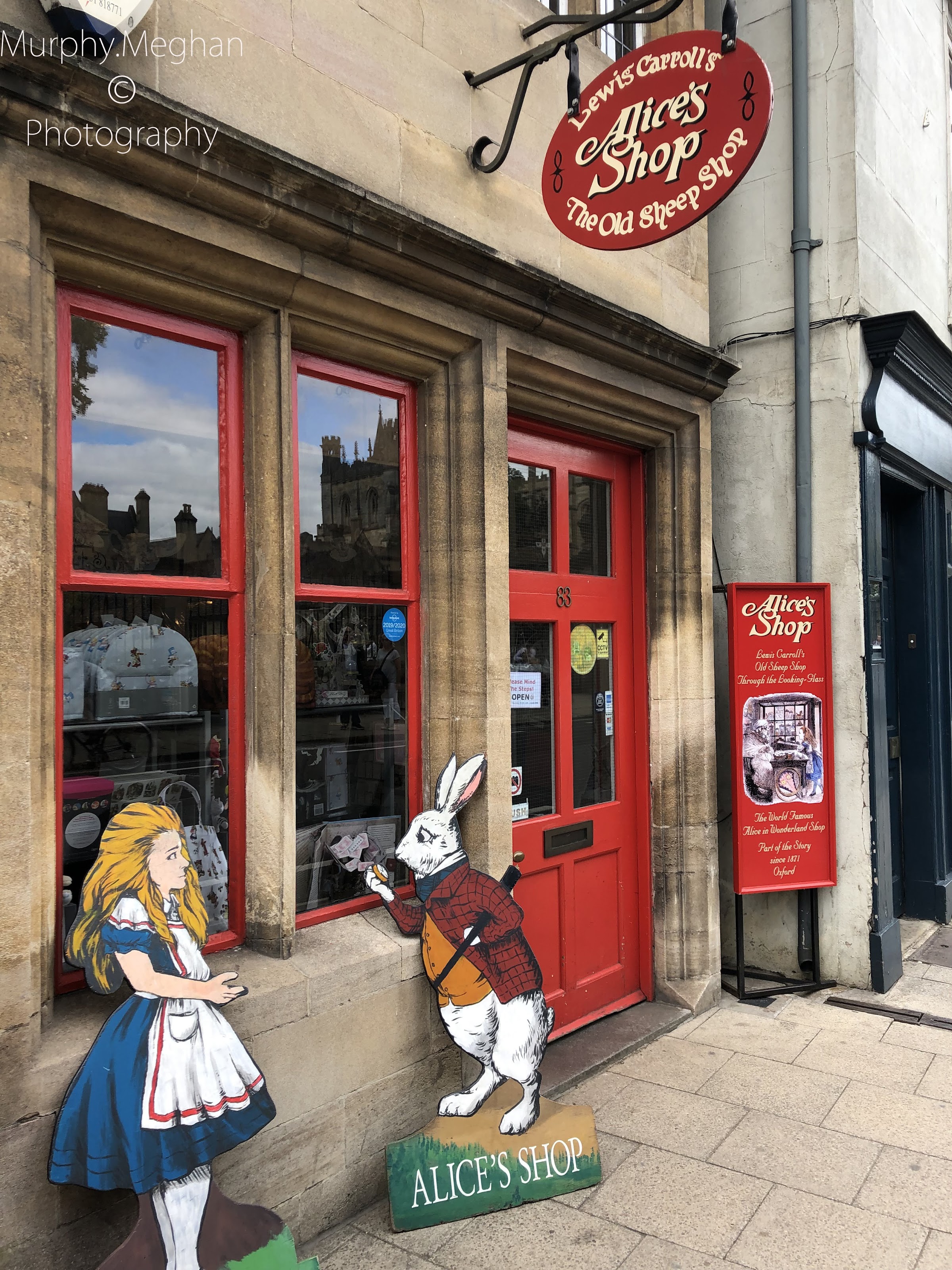 From there we walked towards the Christ Church; it’s the huge building and inside is a large courtyard and looks quite beautiful. We wanted to go in, but the place closed at like 4:15, and at this point it was close to 4:30. We contemplated walking around, but there was a hop on bus just parked outside so we got on it, and of course it started to rain. We rode the bus around and got off to explore a bookstore because why not? We went into Blackwell’s Bookshop and spent a good hour just looking around. There were at least 3 floors to discover, we really had a hard time leaving.

We got back on until we saw a Waterstones and of course we had to spend some time there. We saw another bookstore, but of course it was closed, but there’s nothing wrong with spending time at Waterstones. The only thing is we may of stayed a little too long and we risked missing our train back to Leicester. We had no idea when the next hop on bus was going to come, if it was going to come at all, so we had to do some fast walking to ensure we didn’t miss it. We’ve had enough mishaps on this trip. 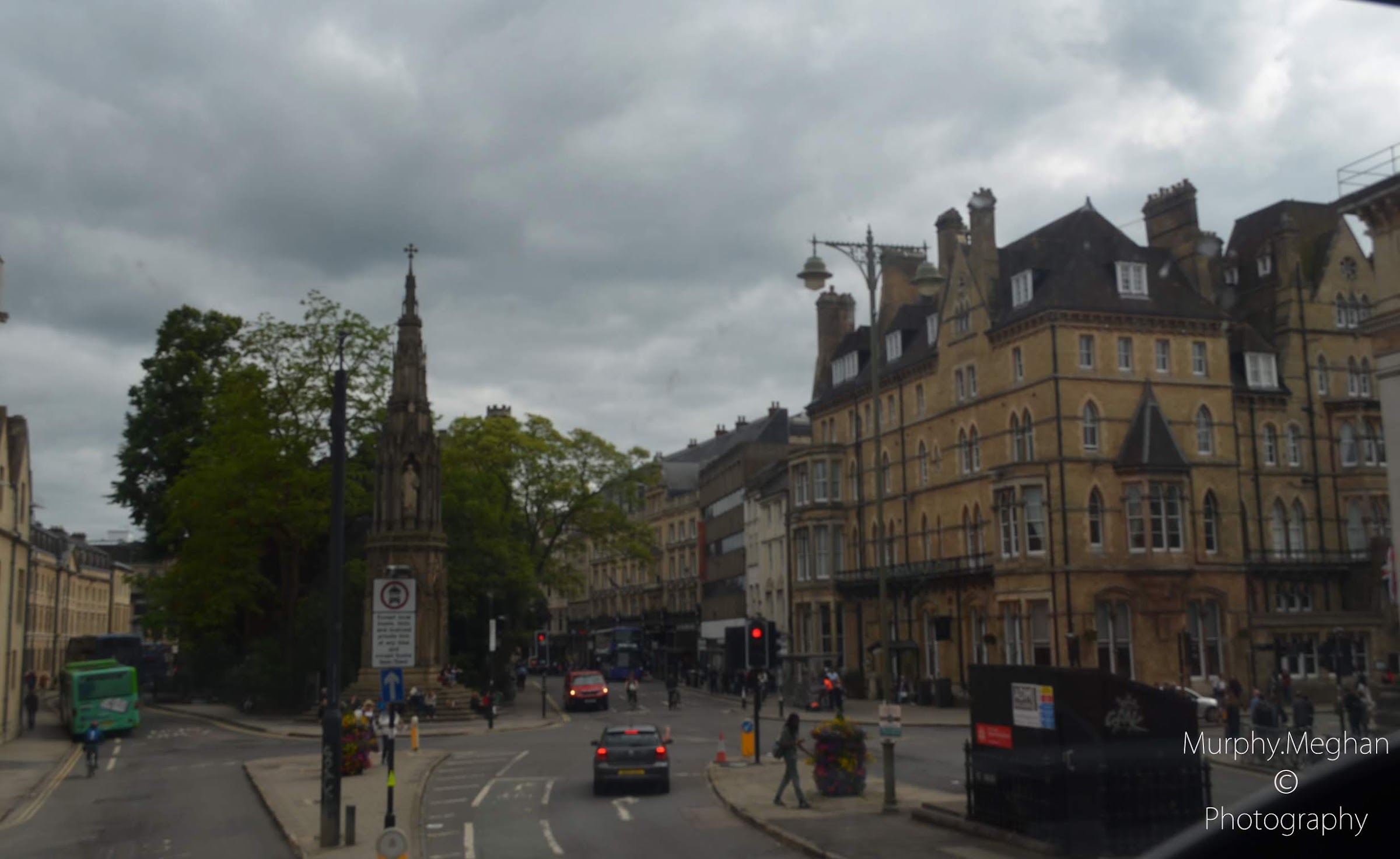 I wish we had had more time in the city. More time to explore, more time to see the architecture, as it was beautiful and more time to go to at least a museum, but alas we got a lot of bookish things done… even if neither one of us bought a book. Look at that restraint! I also wish the weather had been better, but I know that can’t be helped.

We got back to Leicester around 9pm so we decided it was still kinda early and we were both hungry so we went to Nando’s for some chicken, yum! 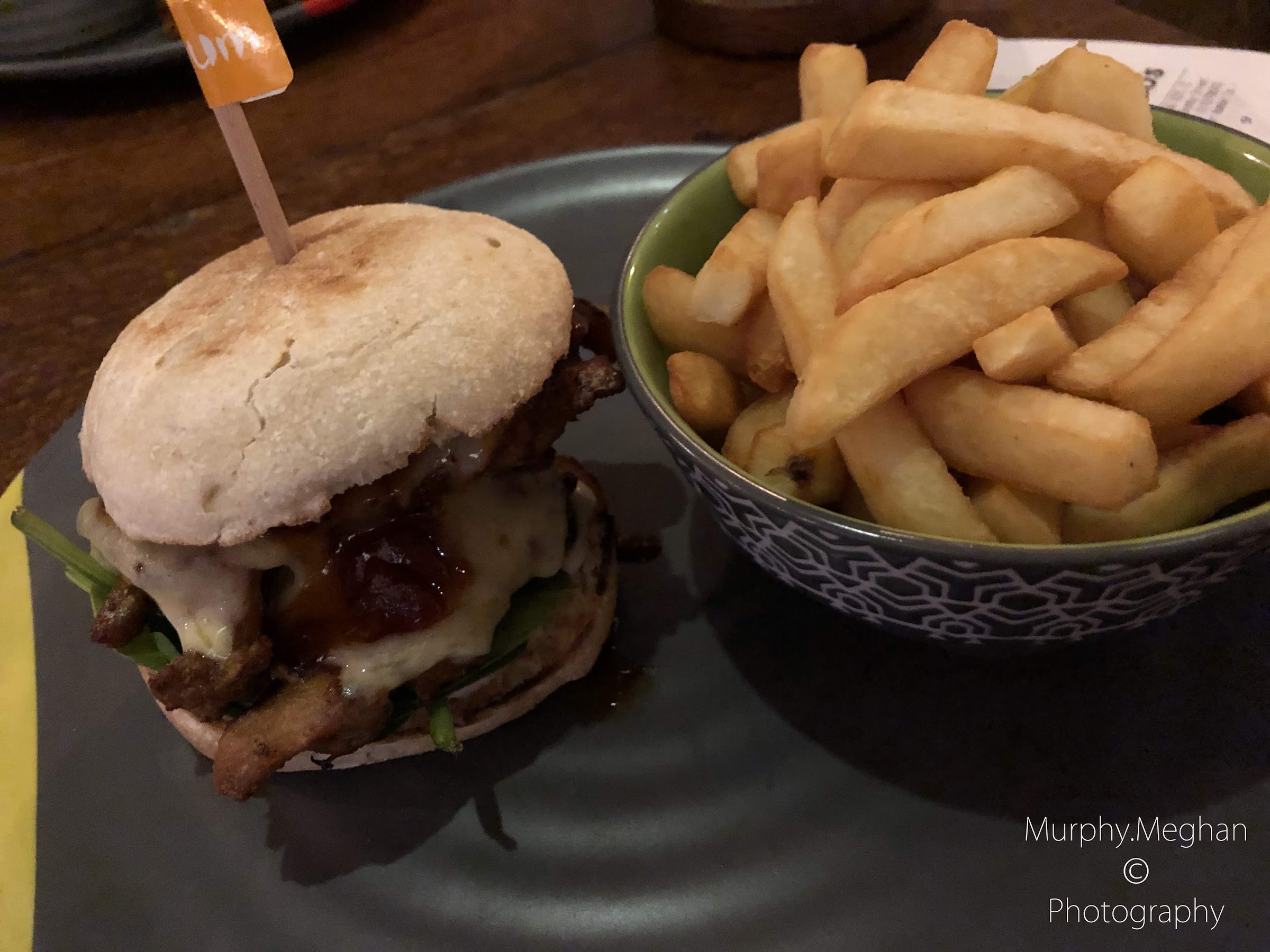 The next day, Tuesday June 18, it was time to visit Brighton! We got up and again left for the train station around 11am since it takes a little bit of time to get to Brighton. 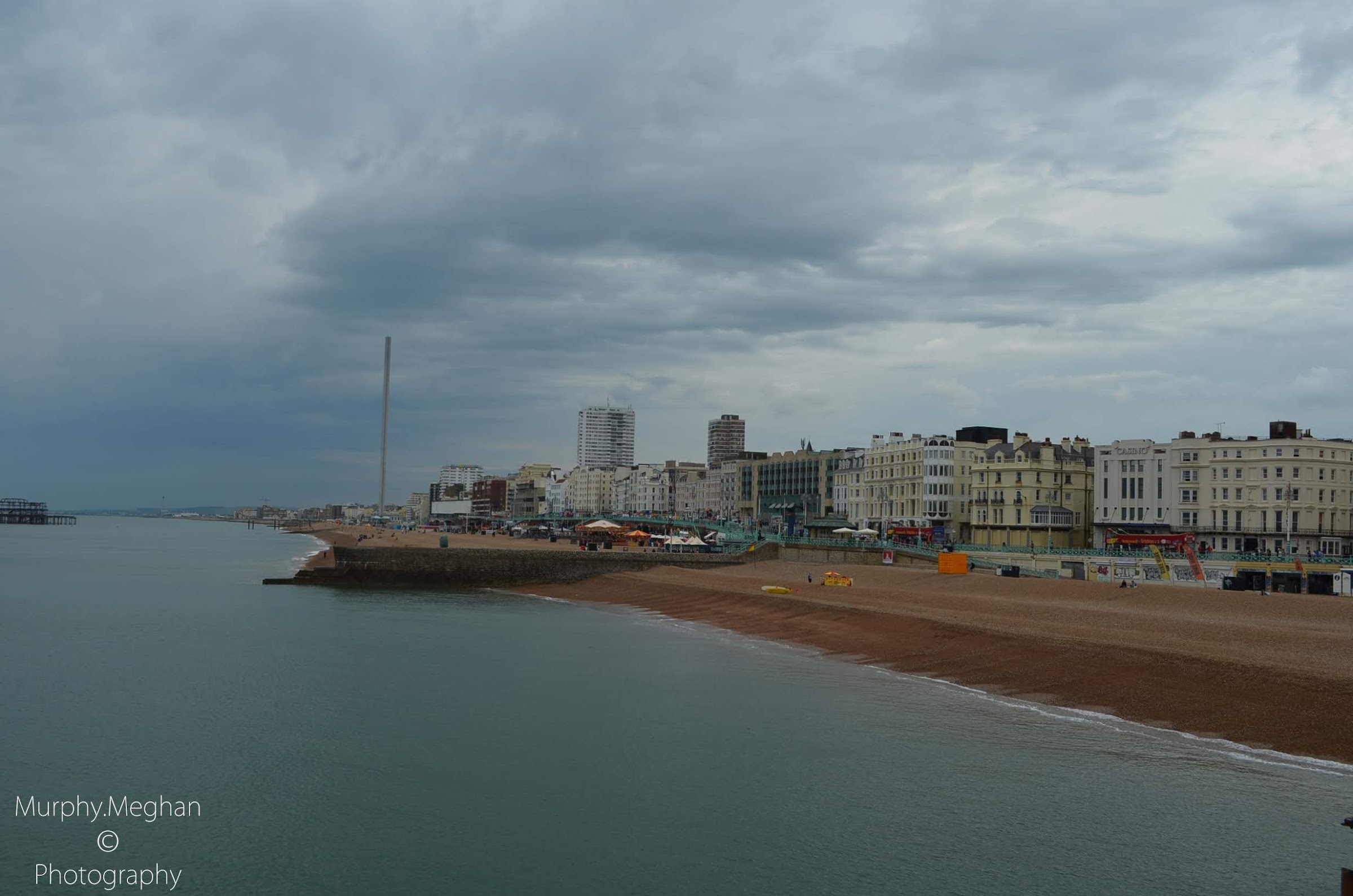 Brighton is such a cute beach town, I would love to go back when it’s a sunny day. It was unfortunately a cloudy day, which is good because there weren’t a lot of tourists, I think everyone there were locals (especially since it was a Tuesday afternoon). 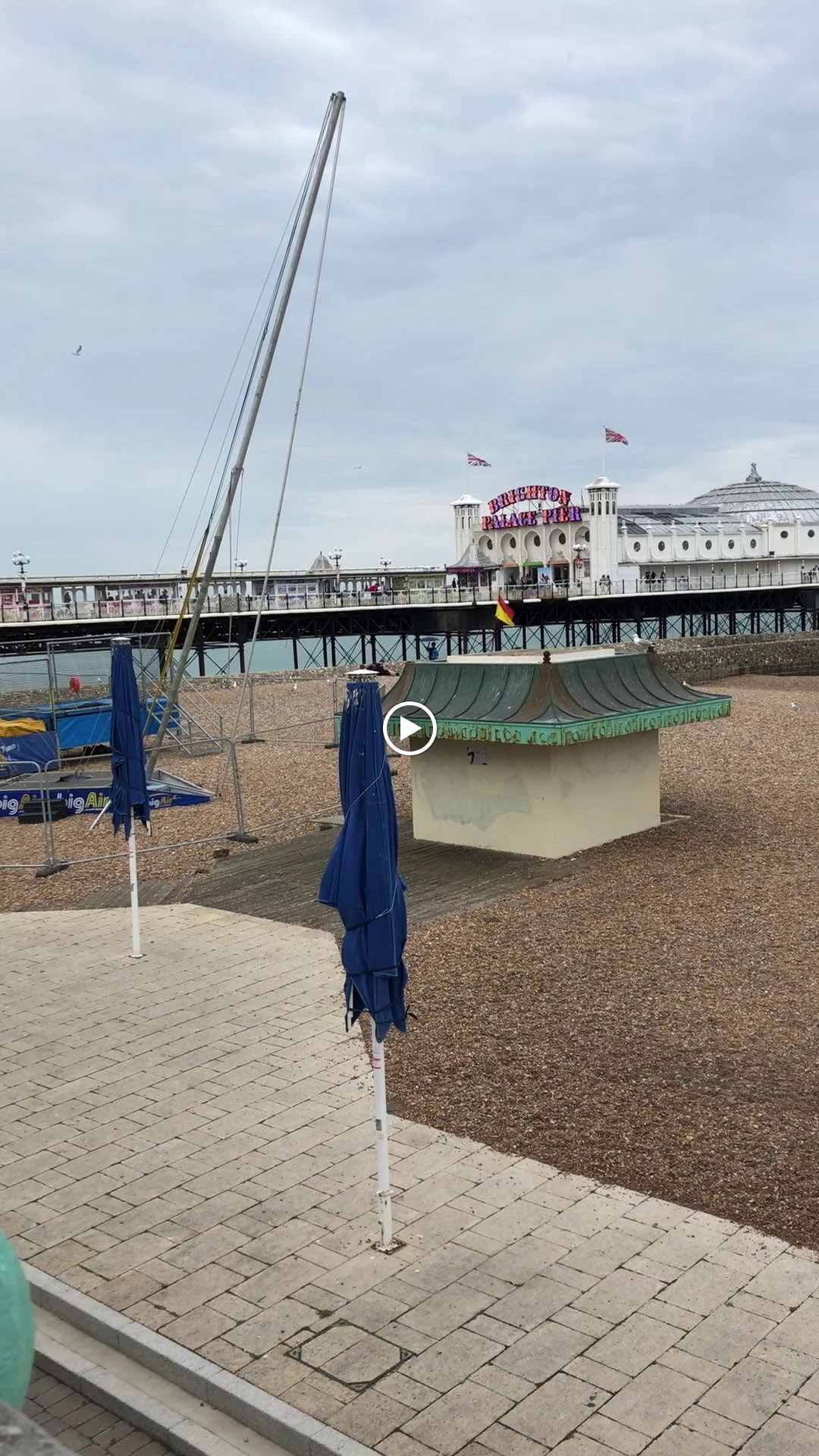 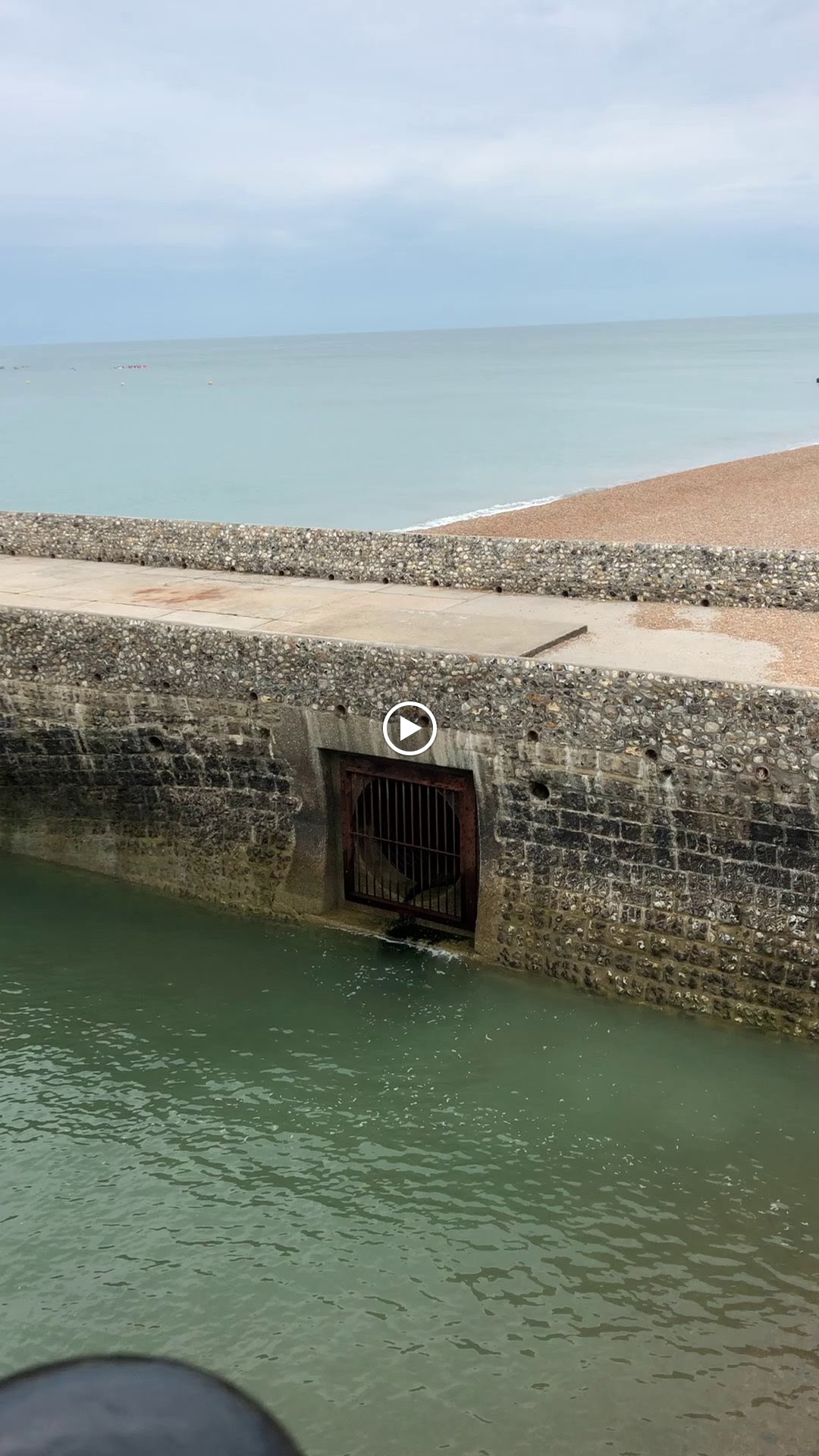 Brighton also has a hop on bus that is right outside the train station so that was great! We boarded, our driver charged us 11 £ for our ticket since it was later in the day and they were only running for a few more hours, normally it’s 14.

There are three different hop on buses to choose from, we only stuck to the red one. This took us along the coast, which was really pretty. We got off at Brighton Palace Pier. It was nice to walk up and down the boardwalk. We walked through the palace which held an arcade with games, then when you got to the end there was a small amusement park. We just walked by just taking it all in. In all fairness we didn’t really have a lot of time to really see lots and the bus came every hour so when you got off you had to spend an hour in that place, whether you liked it or not, plus the weather was kinda crummy. 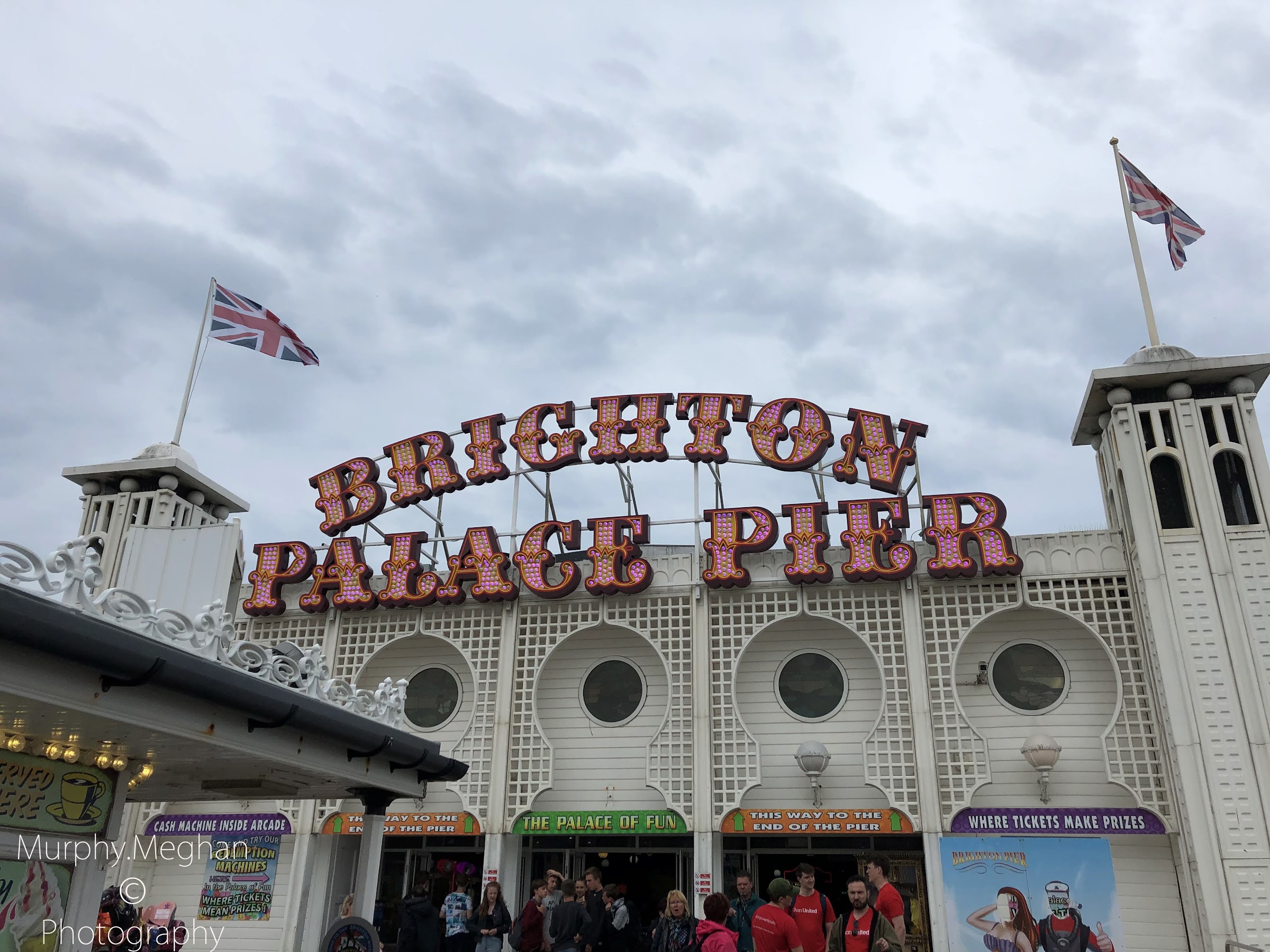 We went into a few shops along the boardwalk… it kinda made me wish I lived near water so I could do that in the summertime, alas I am landlocked 🙄😅

We got back on the bus and took it the rest of the way back to the train station. From there we looked for a place to eat before heading back, since we did have some time. We went to a cafe called The Bystander Cafe. It was such a cute little place that I’d definitely recommend. I had a baked potato with beans, it was huge, but so good! 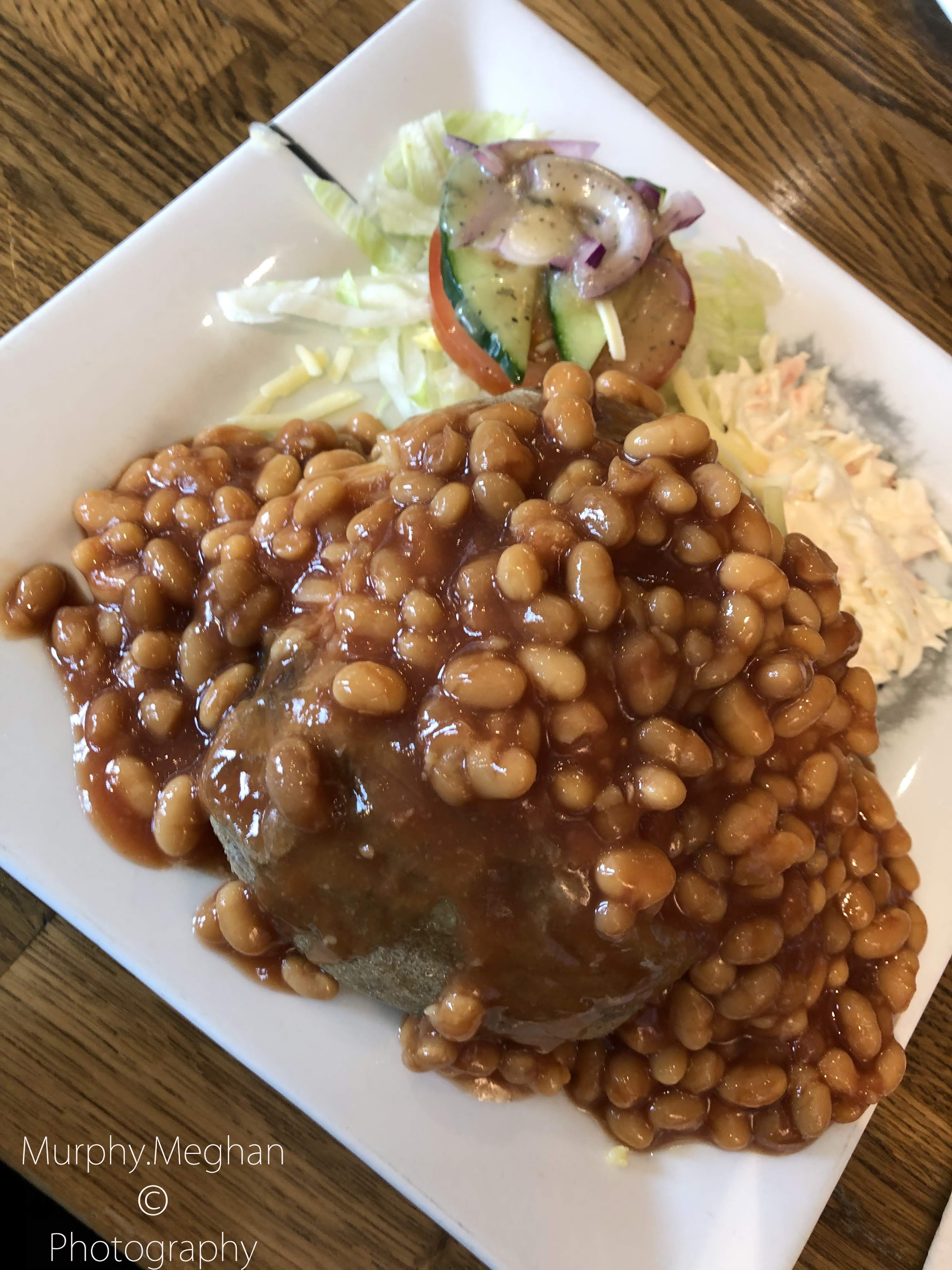 After our pitstop we hit the road back to home-base, Leicester.

That’s all for the first half of the week. I know it all sounds rather boring, I wish I had better stories to tell, but I unfortunately don’t. Everything was status quo and I enjoyed my time in both places. I hope you enjoyed thus short write up!

Up next week, day trips to Liverpool and Manchester.

Look for my photo blog Friday!

2 thoughts on “Take Me Back… A Travel Guide to Oxford & Brighton, England”