Hi guys! Happy Tuesday! I hope everyone’s week is off to a good start! I think it’s the blog post people have been waiting for, my Spice Girls concert experience! I hope you enjoy this as much I enjoyed putting it together! 🙂

I want to preface this by saying, I bought the Spice Girls tickets before I bought or planned for the rest of this trip. I had no plane tickets or hotels booked. Once my friend and I secured tickets (I think we were trying for 3 different cities and we ended up with London) we could then begin planning our trip around this. It’s funny how life works, isn’t it?

I have to say, when I woke up in my friend’s place it didn’t feel like we were going to a concert. After traveling for 9 days straight it just felt like another day, another city to tour. We got ready, I wish I had put more effort into my outfit. We saw people on the tube who went all out and I wish I had tried a little more.

From Leicester we took the train to London St. Pancreas and from there we took the tube down to Wembley Arena. Now I think I watched Bohemian Rhapsody back in May, and that was my first real look at how massive Wembley Arena is. Boy, was I not prepared. 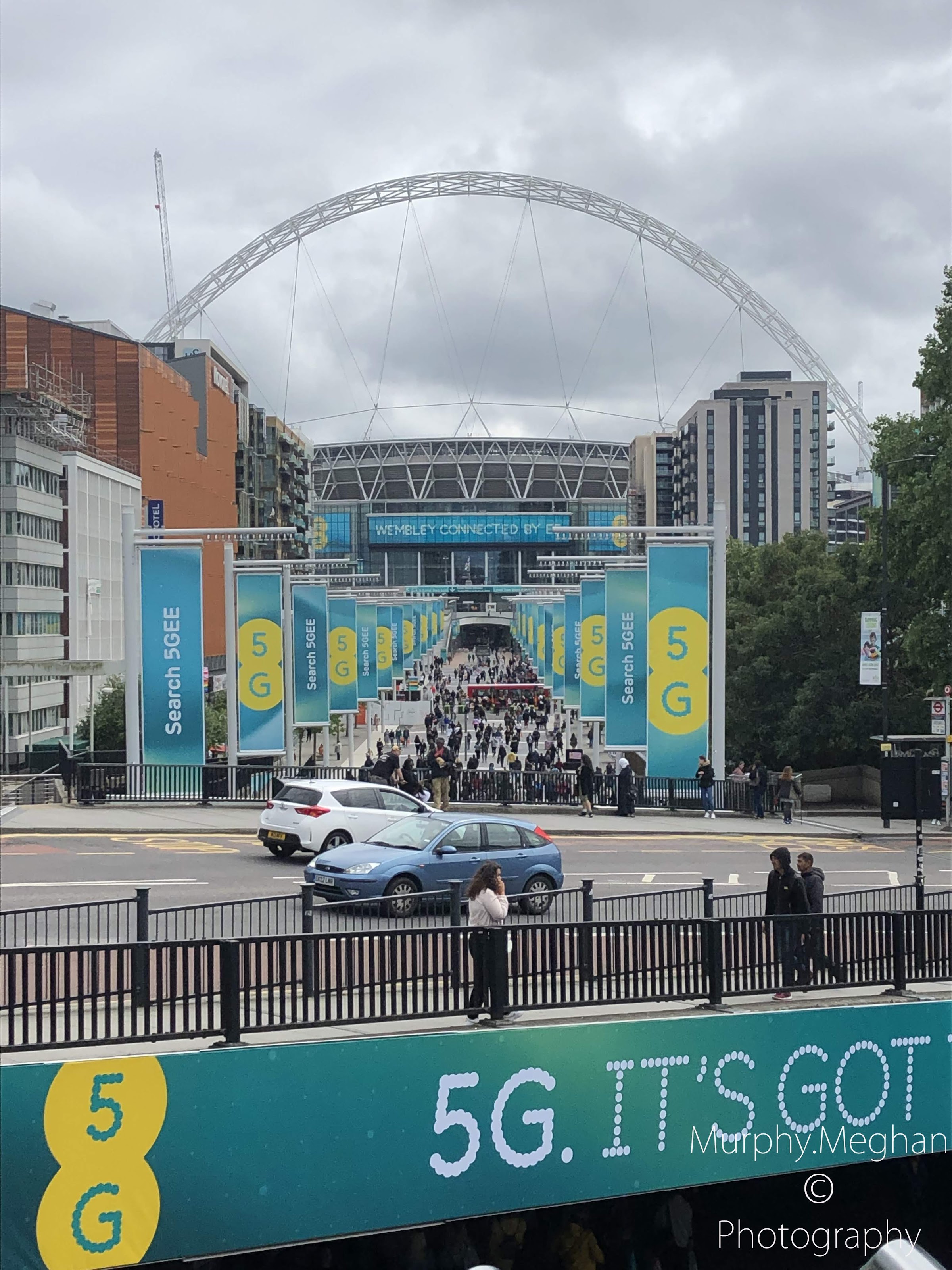 We arrived with time to spare and so we hit a place to eat first. A lot of the restaurants in the area were filling up and fast! We were lucky to have arrived when we did because we didn’t have to wait in line for a table. We found this place called Treatz Dessert Parlour and my god their menu is like a book! I ended up getting an Oreo cheesecake and it was really good, I just wish it was bigger! 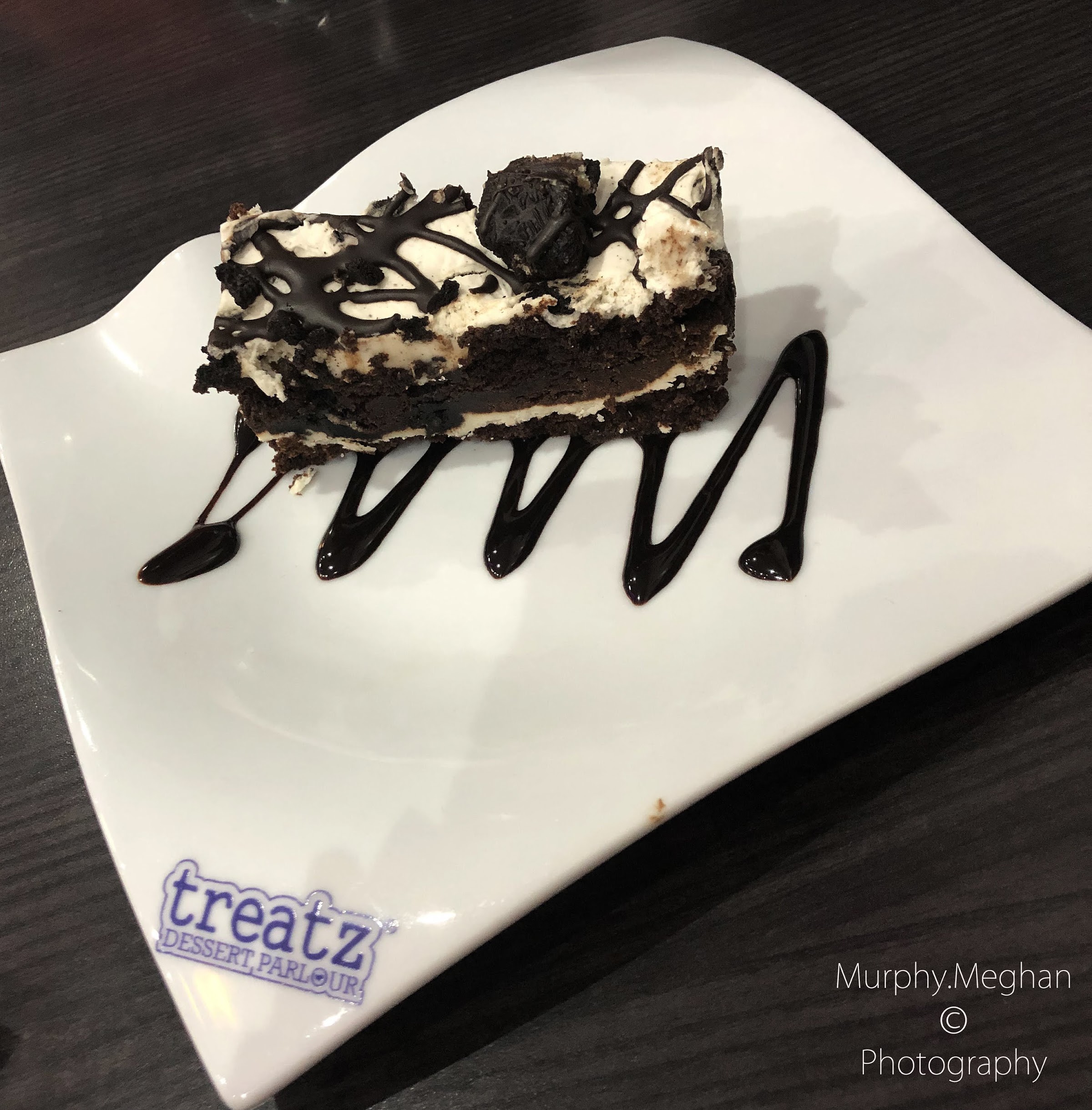 We still had some time to kill so we walked to the community centre which was just across the street from the arena where we looked at books. We always made time for books on this trip! 😛

After spending a good half an hour to an hour there we decided we should probably start heading out. We had to walk to Entrance D and we had to take a good 4 escalators to get to our section; this place is huge!

Before we went inside, my friend got a snack. I was going to buy a t-shirt but 50 £ for a t-shirt is ridiculous to me, that would have been close to 80 bucks Canadian, like nope. I know this is a once in a lifetime thing, but nope. They were even selling programs for 20£. Like, they are totally milking this!

So our seats were section 512, Row 1, which was perfect. It was high enough that we had nothing obstructing our view, but if you’re not into heights it might be a problem, luckily neither one of us are. 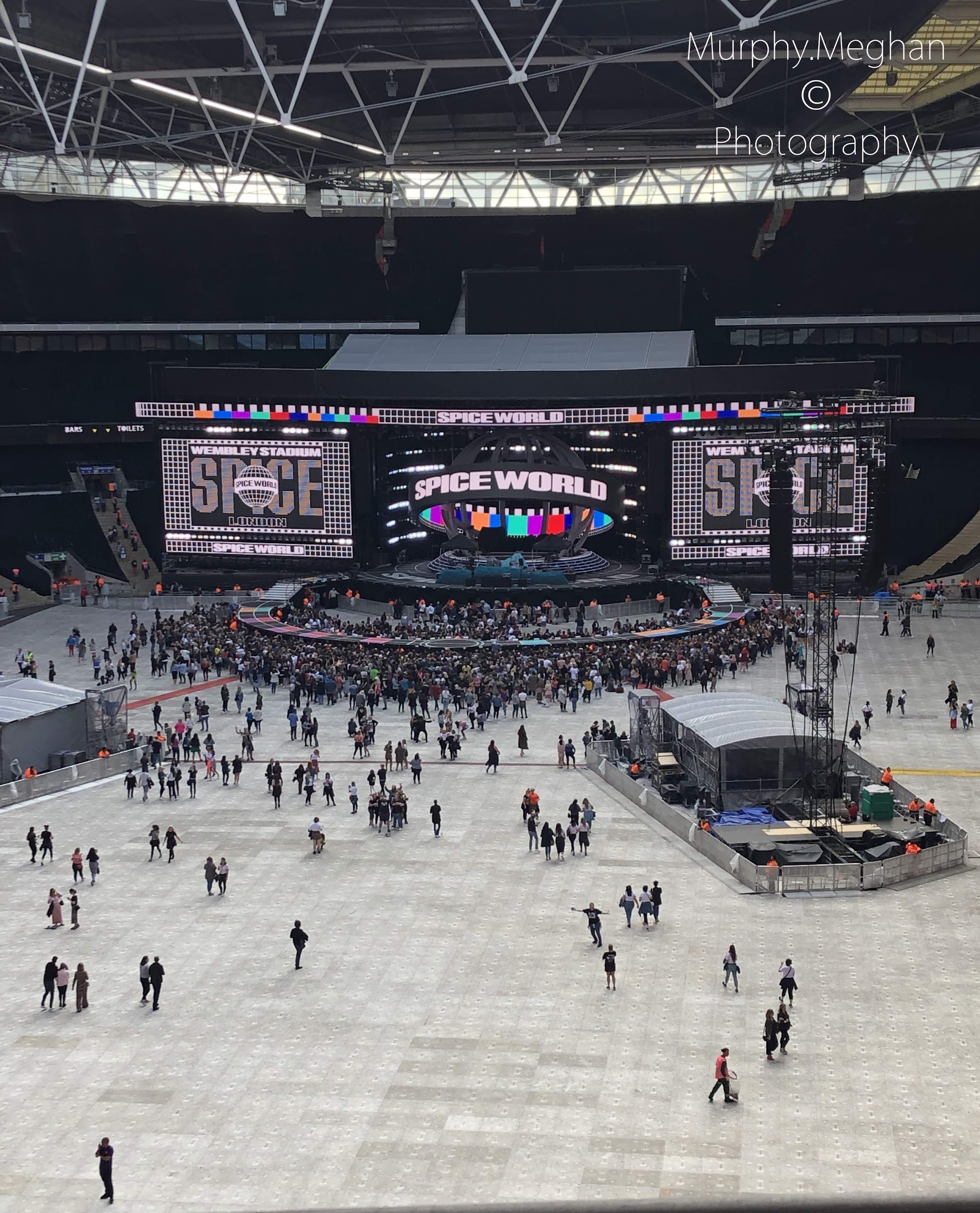 It was fun to watch people filter in, and just to watch how many people this venue can hold. It was also fun to watch people dance around to the music. It was a chilly night, and it started to rain, which I’m glad we were under cover, but the people who had floor seats were getting wet.

It felt like forever before the opening act started. It was a lady named Jess Glynne, at first I didn’t think I knew any of her songs, but it was so good to see the rest of the crowd so into her, but I did know one: Rather Be. I honestly don’t know if more of her songs have made it over to the West, (if they have I’m sorry). She’s a great performer and she’s all for positivity, which is always great to see. Her songs are catchy and fun, and positive. Now, writing this I don’t remember her singing 10 songs because the time just flew by. 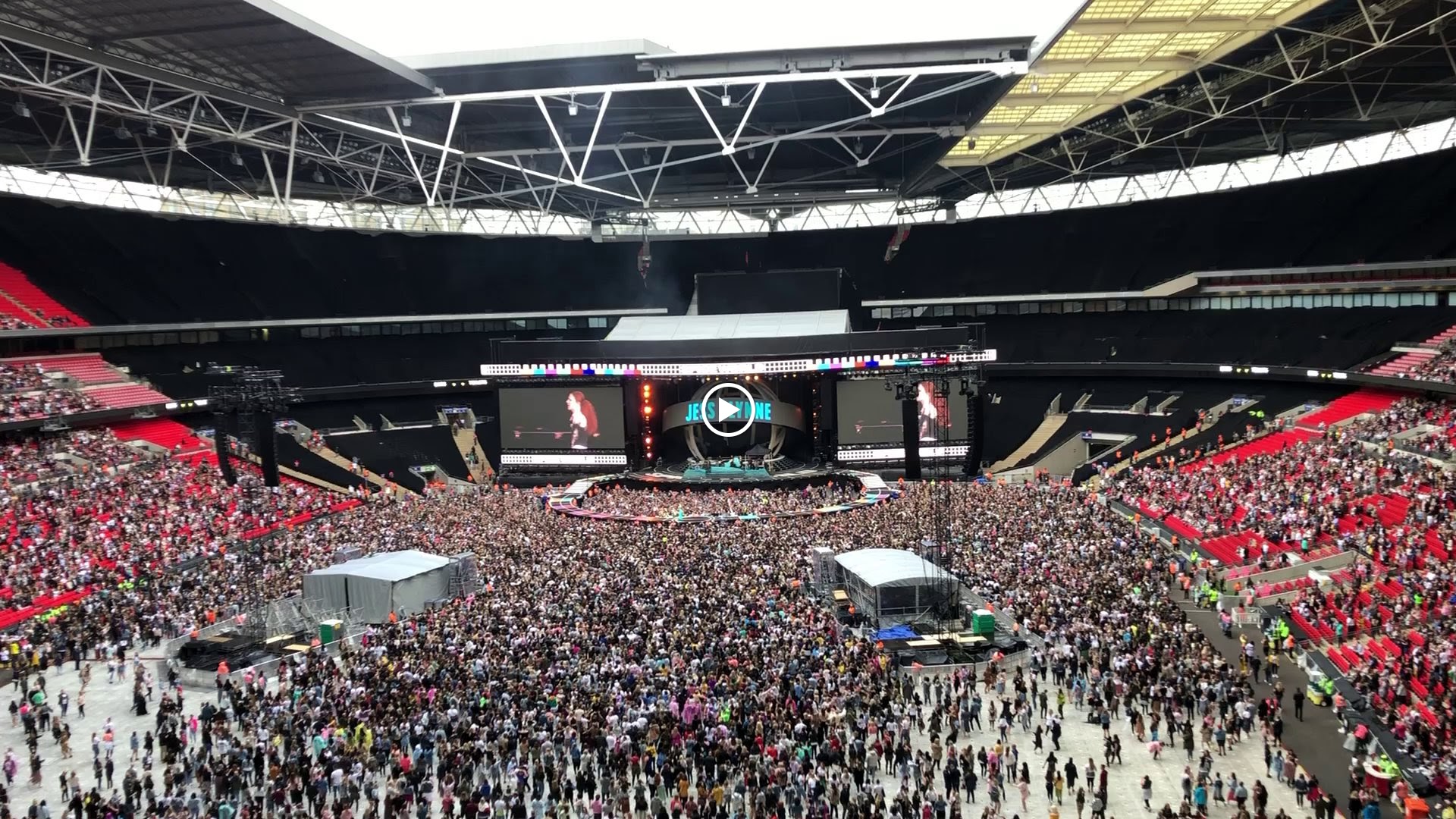 Then it was the waiting game… again before the Spice Girls graced us with their presence. It felt so surreal when they stepped out, one at a time; it was really a performance. 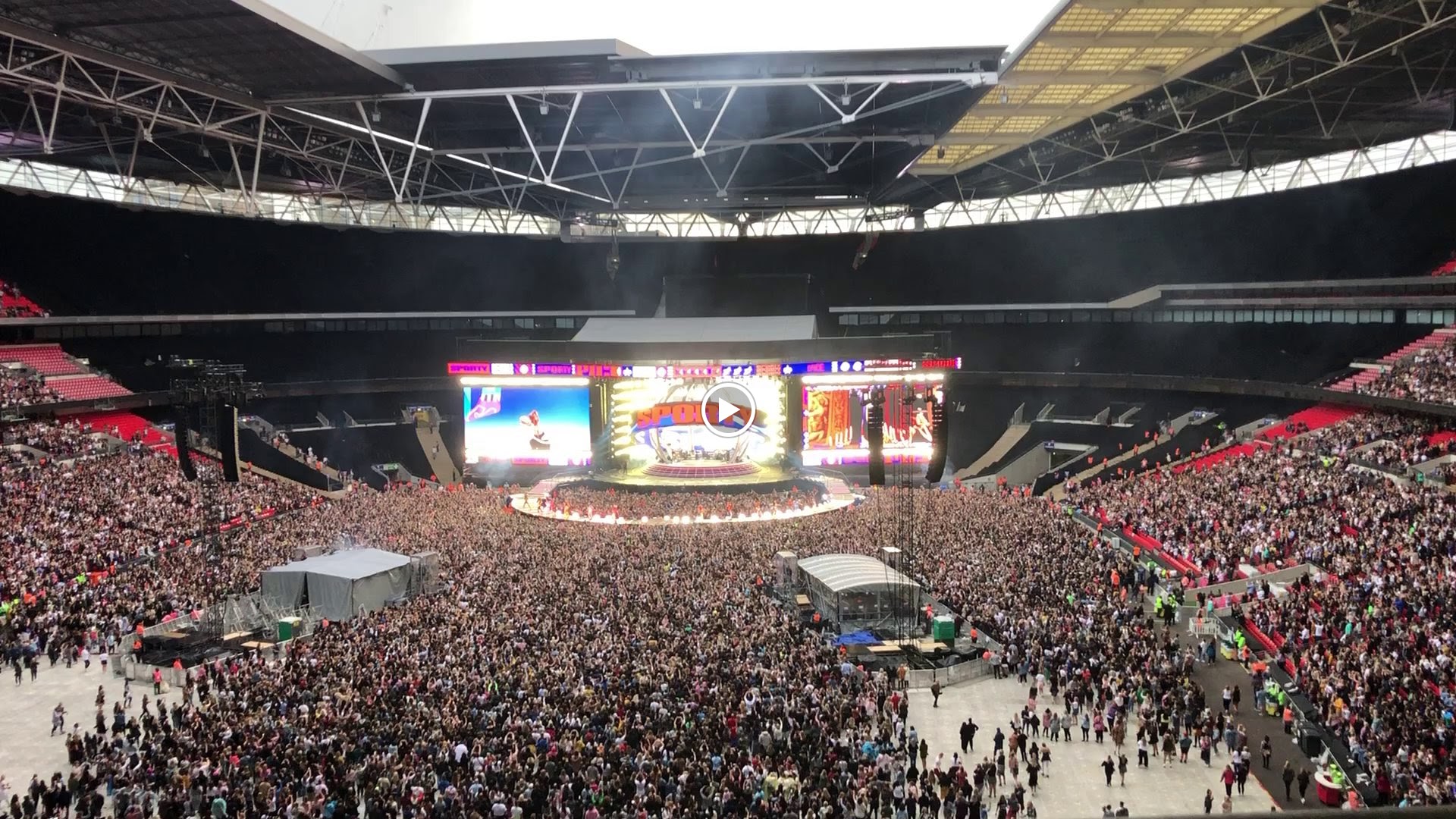 Of course they opened with Spice Up Your Life, because really is it a Spice Girls concert if you open with anything else? The crowd went absolutely nuts! When we were walking in they handed us these wrists bands and when the concert started they started to light up (which you’ll see in my videos), which was so much fun!

I have to say, I felt a little bit like a fraud because I feel like I only knew a handful of songs, the next song was If U Can’t Dance, which it’s not hard to learn the words, and really gets everyone moving, well all their songs really get you moving.

They played Who Do You Think You Are? For this song they started to display some of the lyrics running across like a ticker tape which I thought was pretty clever.

They played Do It, which is not my favourite song, but you move because you’re seeing them in concert! Something Kinda Funny, admitting that I don’t know this song, but still great to see live.

I have to say even their intermission dance performers put on a show. It was like this story they put on through dance and it was such a theatric performance, you almost didn’t notice that the Spice Girls were off stage it was that good.

They came back with Holler, man I hate that song. As much as I want to like it, but I just can’t; even hearing it live didn’t make me like it. #sorrynotsorry

They did another quick costume change and they came back with Viva Forever, now that song I love. It was so fun to be part of the audience and we’re all swaying and singing. 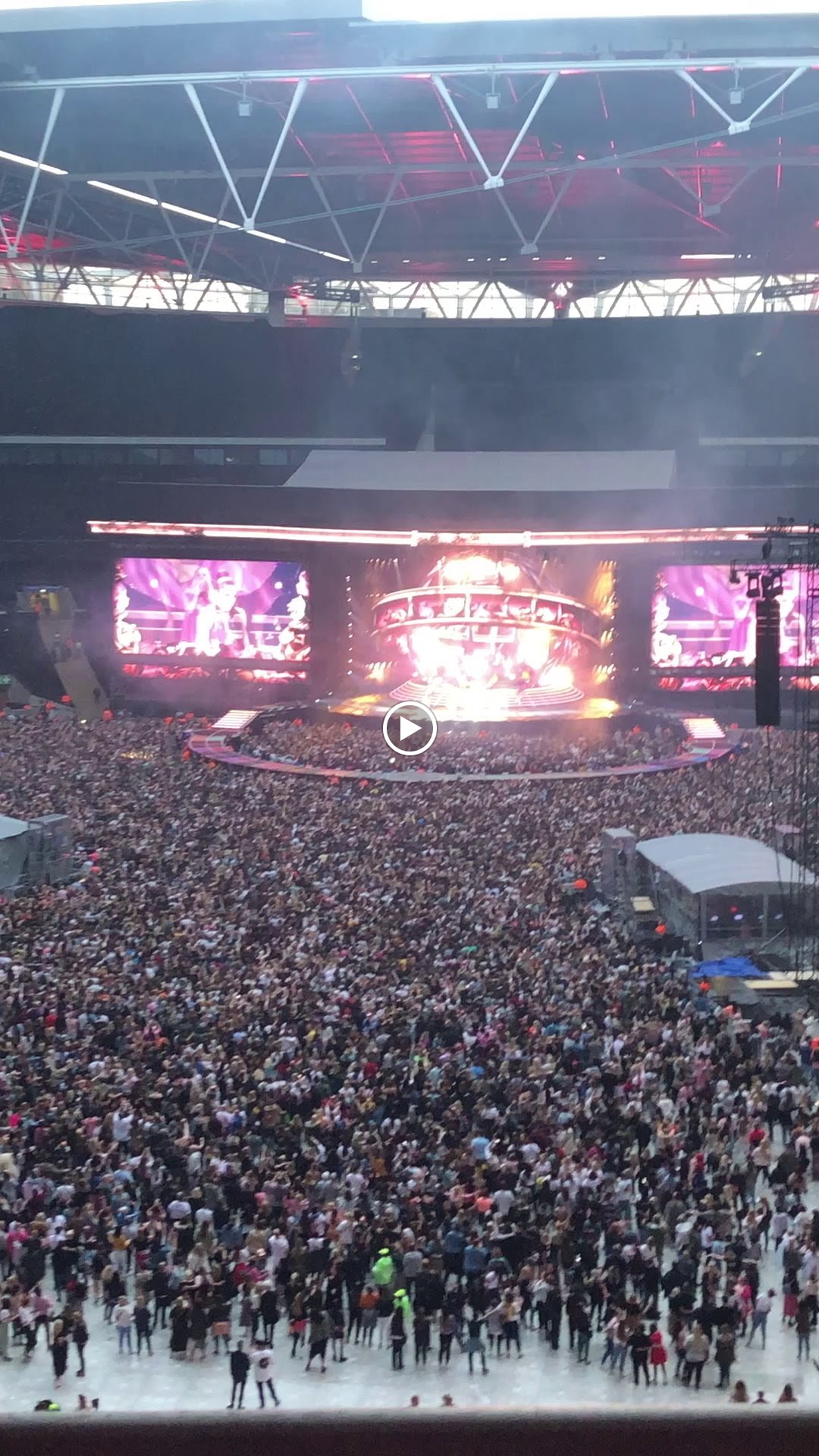 They played Let Love Lead the Way and Goodbye (I don’t know those song either).

Another intermission with some more great dancing and of course our wristbands lit up in time to the music! 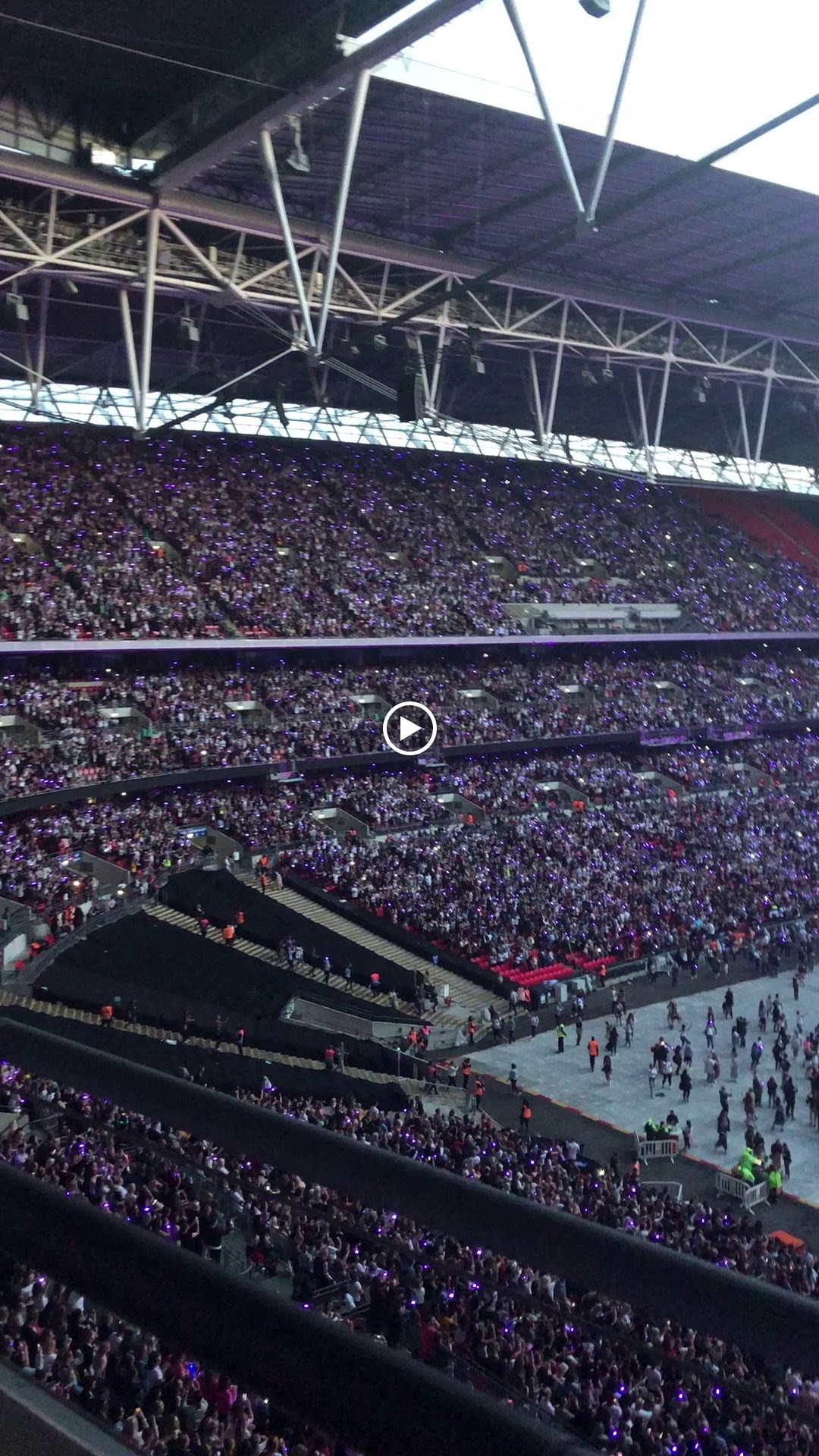 They came back with Never Give Up On The Good Times, this I can tell you is a song I always skip when it comes on shuffle, but it’s got this 70s/disco vibe, which I like so I have no idea why I always skipped it because it’s really good, ha!

They did a cover of We Are Family which was fun! Then they played Love Thing, which I feel like I’ve heard before, but I couldn’t place it, still a good song though. This ran into The Lady is A Vamp, which I also don’t care for, but they really put on a great show. They get into it and seeing them perform you can see why they were as popular as they were (are), they really know how to put on a show. They use the stage to their advantage, especially when the stage extends out into the audience.

They went off again, and came back with Too Much, I love that song too. This is where we started to get into the real classics. The next was Say You’ll Be There and I think I lost my shit! You only get 8 seconds in my video because I died 😛
If you remember my music Monday from a month ago I used that song because it’s my favourite Spice Girls song (I’m trying to type this and singalong to the song and it’s really hard 😂) I was up dancing and singing along man, I just had to watch that I didn’t get too crazy, being row one and all 😅. 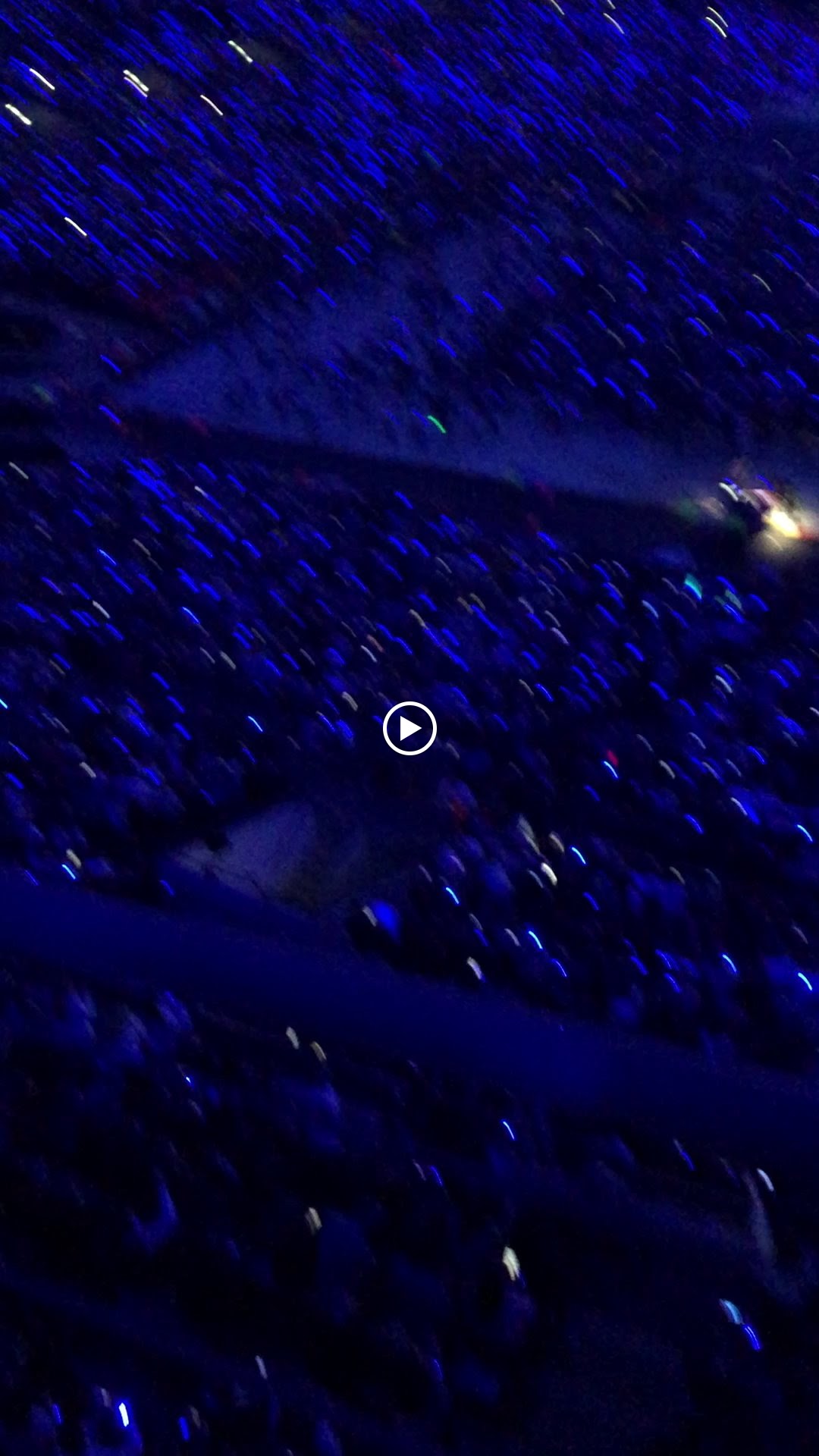 2 Become 1 was the next song, also a great classic. I like that they brought it down just a little. 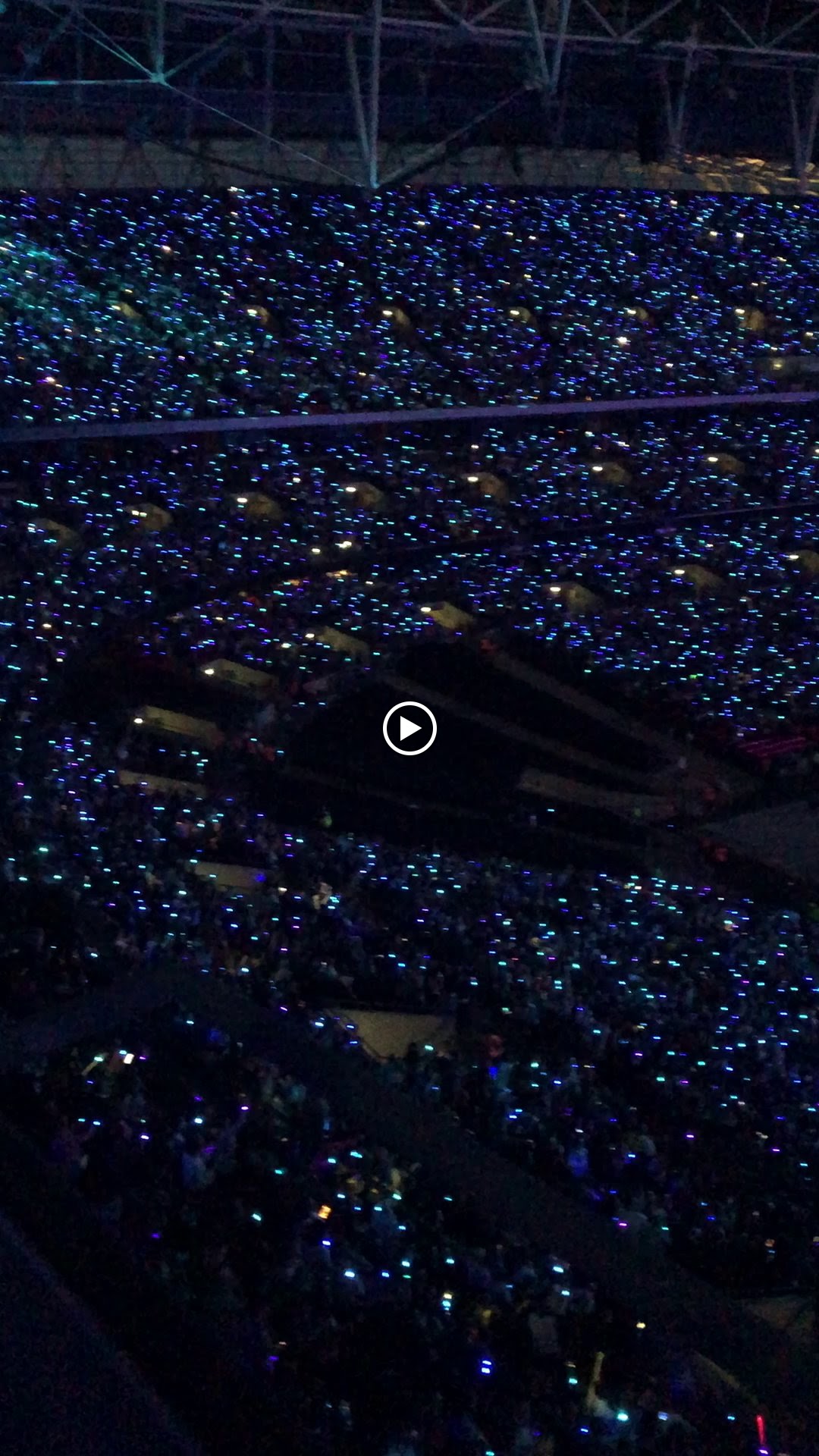 They had yet another intermission, and they came out blazing! They started playing Stop and the place erupted once more. 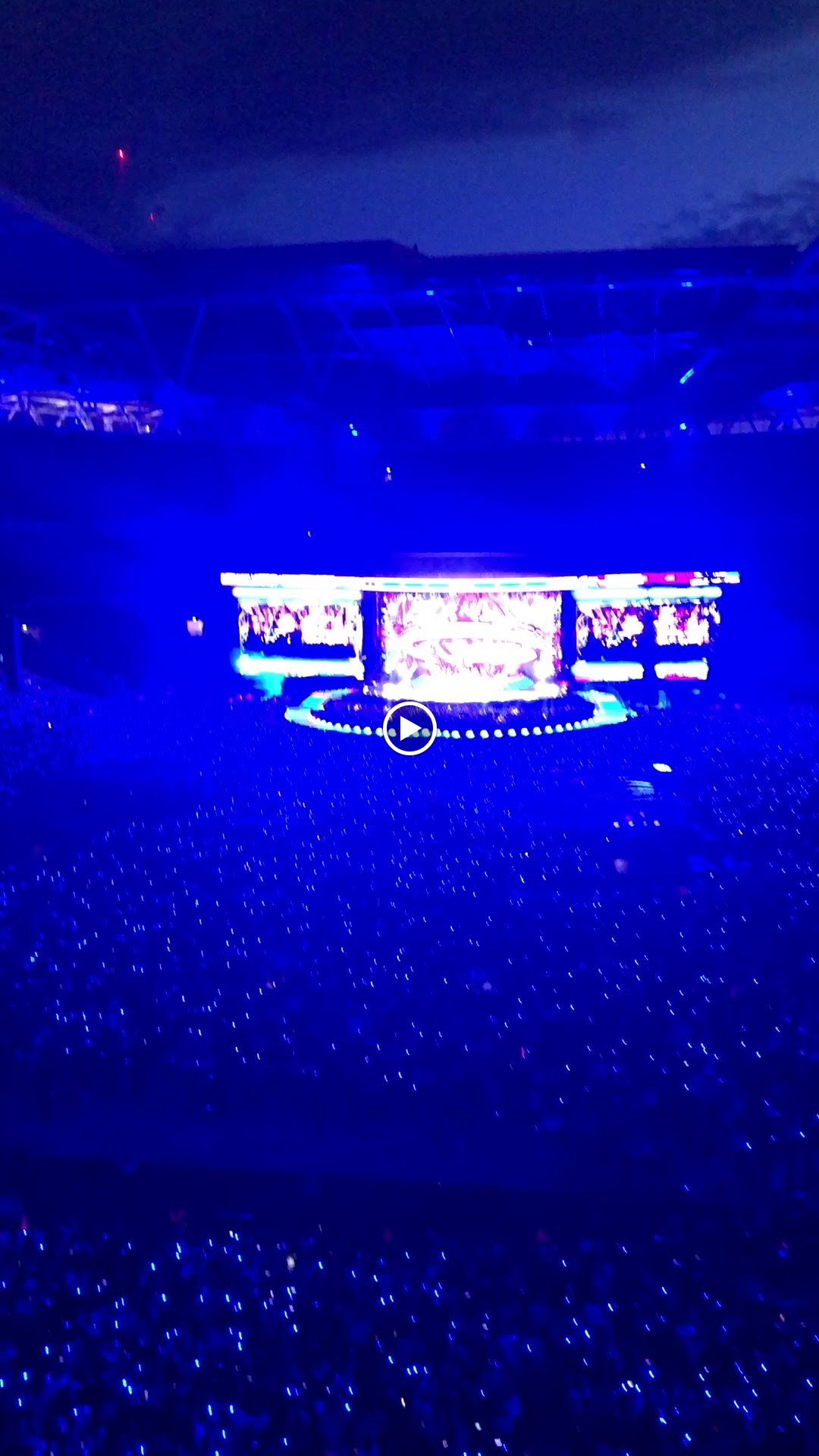 They brought it down once more by playing Mama. They brought their kids, and moms up on stage and it was really sweet, it had the audience in tears. I’ve actually never heard the song before, but listening to it now gosh I’m in tears… what is with this song?!

Then, wait for it, the big one, Wanna Be started playing and the building just exploded. There was so much going on it was a moment that is so hard to describe, it was a had to be there moment. I’m actually going to admit it that this isn’t my favourite, I find this the most overplayed Spice Girls song that I don’t care for it… but that doesn’t mean I don’t know all the words, and you can bet your butt I sang (screamed 😂) all the words. The song ended on fireworks, and left the audience in euphoria. 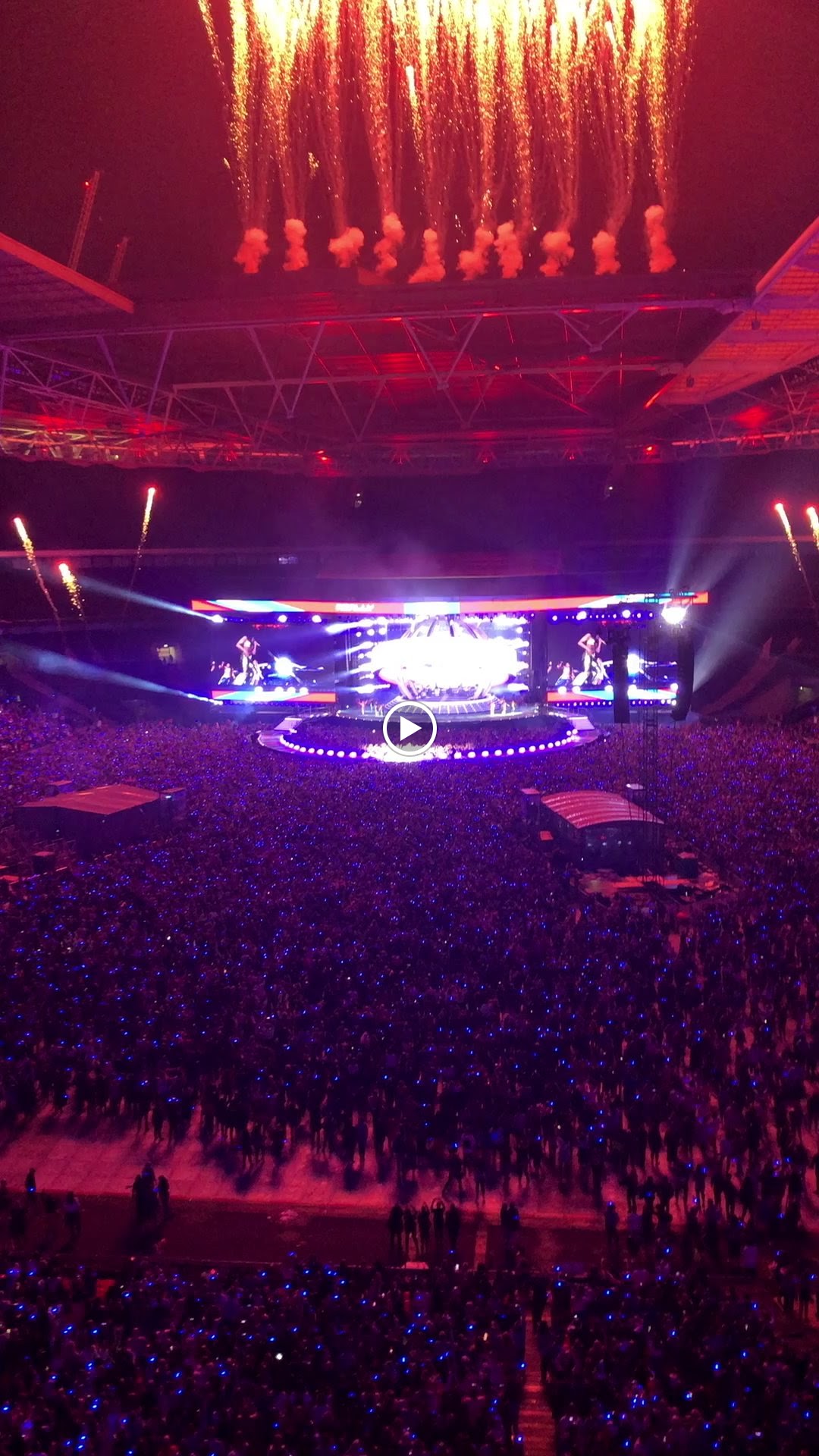 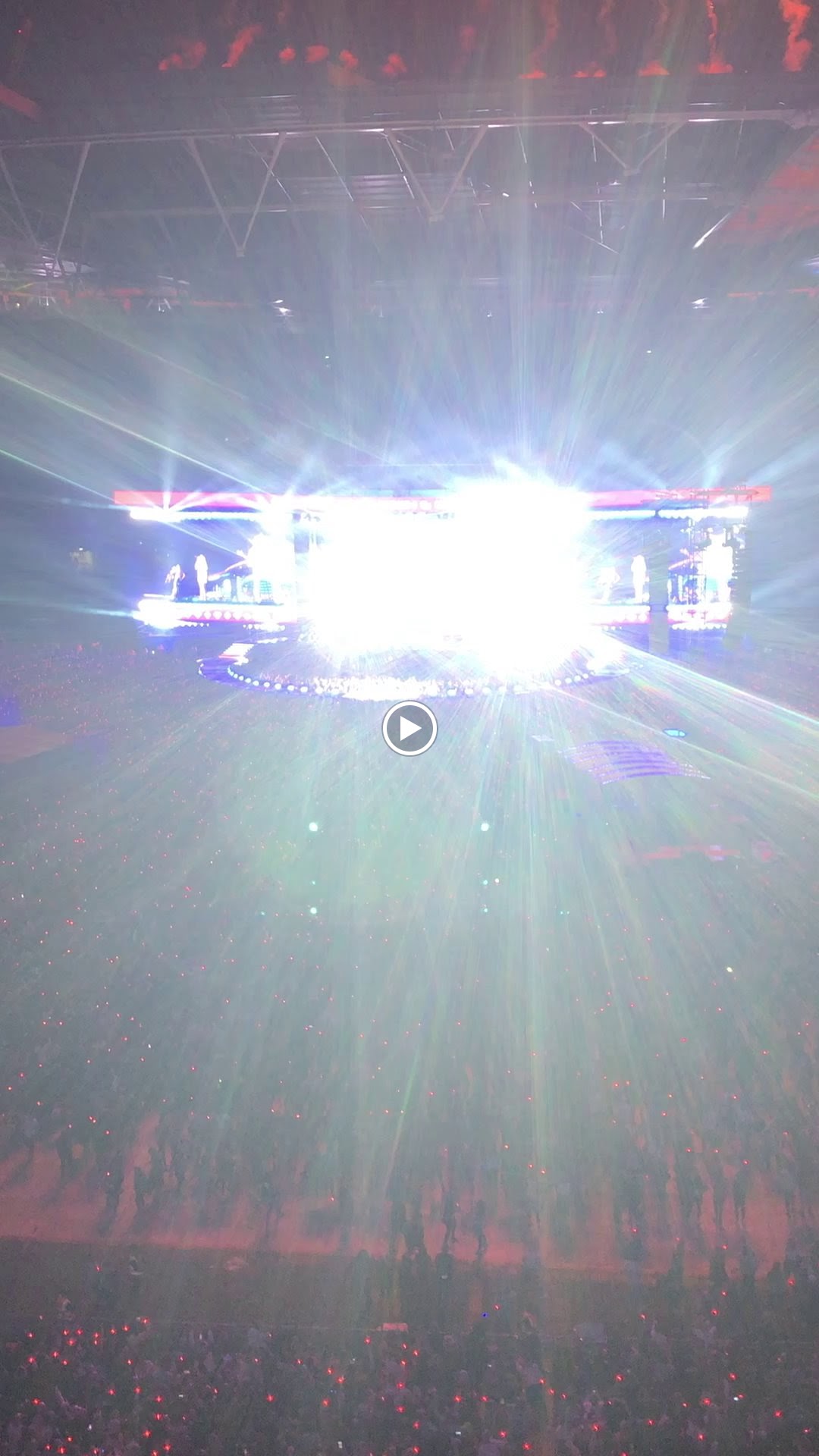 It as such a great way to end the night.

I had no idea it was their last date on their tour, and that just kind of made the night that much more special. Even between the four Spice Girls you could see they were sad that it was the last night of tour. They talked a lot about it, and they just wanted to come together and really thank their fans for sticking with them for so many years, especially when they haven’t released any new music.

It was amazing to see people from all over the world coming in for this concert. The two girls who sat next to us were from Denmark, and we were just two Canadians pretending it was 1998! 😛

We had fun leaving the venue. All those people leaving at the same time, it was madness, I’ve never experienced anything like it in my life. I almost got knocked over, and everyone wanted to sing songs… I’m sure I’m in someone’s video looking sour because I hate feeling as claustrophobic as I felt, and it only got worse when we got into the tube. It took almost an hour and a half just to get to the tube. Because of this we ended up missing our bus back to Leicester and we had to wait until 2am for the next bus… which we had to buy tickets for again. We didn’t get back to her place until 5am, but it as all worth it.

Up next, day trips to Oxford & Brighton.

Look out for my photo blog Friday!