Hi guys! Happy Tuesday! Today I’m going to be talking all about season one of Brooklyn Nine Nine.

Guys, seriously I love this show.

So the only reason I started my journey down Brooklyn Nine-Nine is because I have co-workers at work who say that I remind them of Gina on the show. Now you can’t really fully appreciate what that means unless you see the character in action, and so begins my path.

I have to say first impressions; this show is hilarious… I don’t really see myself in Gina, but I’m told that I’m a better version of her, I guess that’s a good thing. As I continued I can see somewhat what they see, I’m super sarcastic and can be snarky like her, and she’s always dancing… that is also me… yes that is me at work… god I am Gina, look how I just convinced myself.

So the show is about the 99th Prescient in Brooklyn and centres around all the crime that they fight. Great another cop show, but this show is a parody of it all, and it’s amazing… I’m saying this with only 5 episodes under my belt here.

So the show starts when a new captain comes to town and he is going to shake thing up. I guess this gives the show a good way to introduce all the characters because we’re supposed to be like the captain… stepping into new territory.

So Captain Holt is this very strict man who wants to follow every rule, and that doesn’t sit well with most of the team, as they are so used to doing whatever they want. With Holt here they can’t do that, especially Jake Peralta, our main character who is a complete goofball who never grew up, yet he has his moments, and is very good at his job.

They also mentioned that Holt is gay and that it’s taken him a long time to get a captain position that accepts his lifestyle. But you would never know looking at his character that he has any type of life, his expression is always so blank, whether he be happy or bad.

There is Amy Santiago who is Jake’s partner most of the time, and she is the only one who thinks Holt is the best thing ever, claiming he’s going to be her Rabbi… okay. She’s super competitive and apparently she has seven brothers so she feels the need to validate how tough she can be; that annoys me about her, but I’m hoping this changes a bit.

Charles Boyle is this pipsqueak of a man who idolizes Jake and is in love with Rosa.

Rosa Diaz makes me laugh, she’s this tough cop who takes no attitude from anyone and gives people these evil stares to get what she wants. It’s funny to watch, plus she also has these one liners that are just the best, but probably not as good as Gina’s can be. Gina Linetti isn’t a cop… to be honest I don’t know what she does but she sits around the office and is just the ultimate joker, who I can’t tell if she does any work, but her existence is necessary. Ah, she’s a secretary, that’s what she does!

I can’t forget about Terry Jeffords, he is this big macho man, who is too afraid to do anything since is daughters have been born. It’s funny to watch the turmoil in him as he wants to do good, but he’s too afraid to do it.

Each episode is on a case by case biases, and it feels like they seem to get sillier and sillier.

Peralta really likes to make bets; he has an ongoing one with Santiago to see who arrests more bad guys, so far I believe Peralta is winning.

Next on Halloween he bets Holt that he can be the best criminal, and he bets him that he can steal his medal that is locked in a safe, in a locked cabinet, in his locked office. Holt doesn’t think he can do it. Peralta says he’ll work weekends without pay for five weeks if he wins, and if Holt wins he has to do all of Peralta’s paperwork. Talk about the most elaborate plan ever, it involves falling through the ceiling, being in a janitor costume, pigeons, but in the end he actually wins. Holt has a new appreciation for Peralta. I have to say I am really liking the chemistry between the two of them, it’s hilarious.

We also learn some things about Rosa, as she likes to keep her life very, very private. She went to catholic school, she tells people she was kicked out, but Terry finds out that she was the perfect student, she left on her own to go to ballet school. But then she claims she was kicked out of that school for beating up ballerinas… I wonder how true that is.

Charles get shot in the line of duty protecting Rosa… only he doesn’t remember saving anyone in particular; he just remembers saving his fellow cop. Rosa thinks he’s going to fall even more in love with her and act stranger, but when he tells her he didn’t know, things settle down between them.

So he gets shot in the butt, because there is nothing funnier than a shot to the butt, and he has to drive around on this scooter. Holt wants everyone to help him out and to be extra nice… but things start getting creepy real fast, as no one can actually stand Charles for long.

We finally get to meet Holt’s husband, Kevin. Kevin invites Holt’s work friends over for his birthday. They all act out of course because no one is normal in the squad and Kevin has no patience for them either. It’s with Peralta’s detective skills that we find out Kevin hates cops because he thinks they are all the same homophobes. It’s Peralta who tries to break those negative thoughts.

But at this party, Charles meets his new love interest, Vivian. Peralta thinks he’s going full on Boyle with her. He’s falling so hard that he wants to marry her. Well when they find out that Vivian is just as crazy about him, they let Boyle propose to her… now they’re getting married! 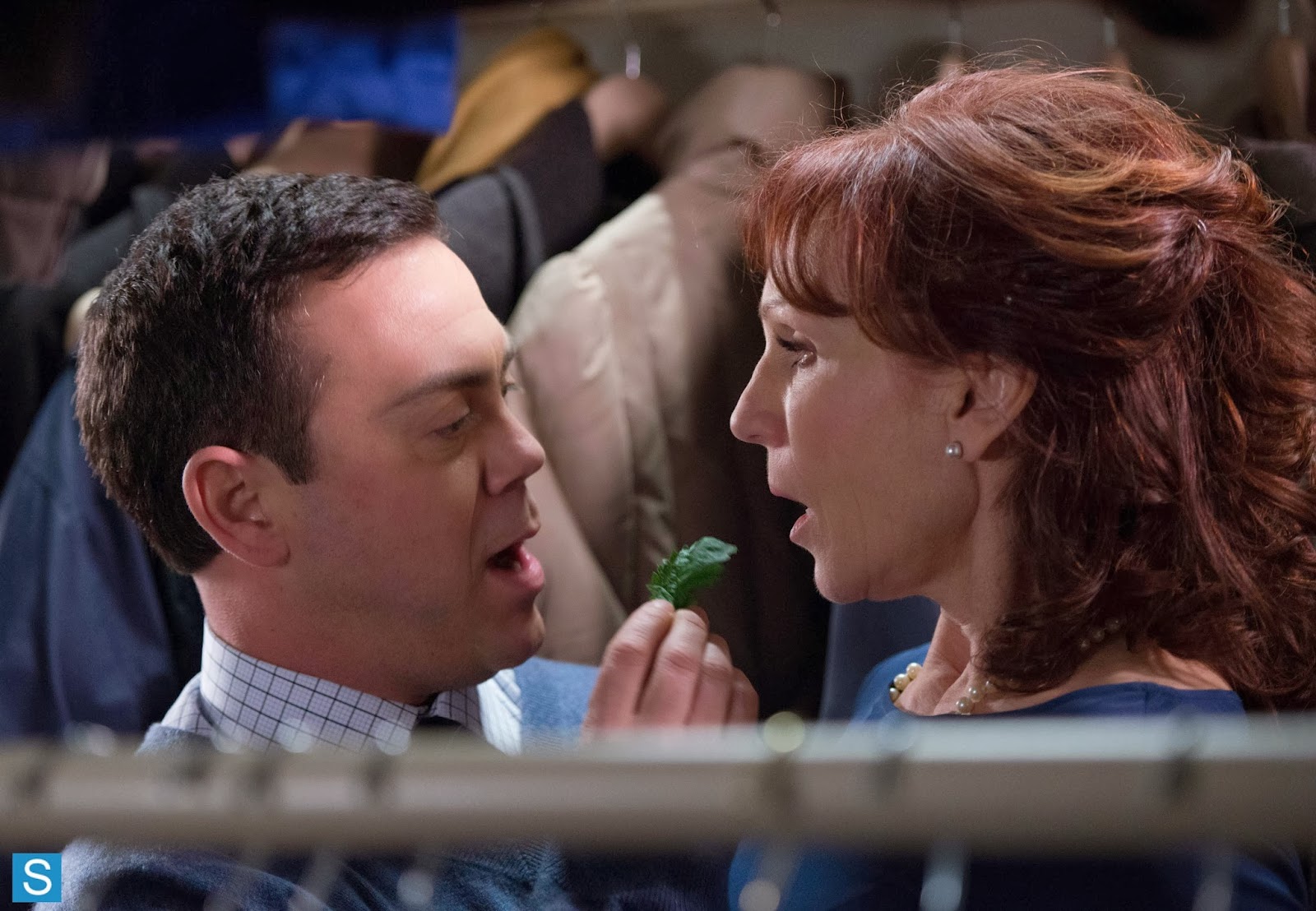 Woah, Rosa is actually upset that Boyle didn’t invite her to his wedding. She thought they were friends. Interesting. Does she now have feelings for him?

I like that we get see start to see how long everyone has known each other, or well how long Peralta has known them. We learn that he and Rosa went to the academy together, and he and Gina have known each other since they were kids. When Peralta’s grandmother’s apartment is going to be taken away from him, he goes to Gina for help since she’s known the place for about just as long. In the end he lets her have the apartment and he moves into her old apartment paying rent to her. We also learn that it was Peralta who got Gina her secretary job.

When Peralta wins the bet against Santiago he takes her out on the worst date of her life… but as the night goes on they have to do work, a case comes up where they have to do a stake out, or well start one and wait until the night crew come to relieve them… only Peralta doesn’t want the night to end since he’s actually enjoying himself… so is there going to be a thing between them?

We spend a lot of rest of the season with this sexual tension between Peralta and Santiago. It gets really bad when her ex shows up. Boyle totally can see that Peralta likes her, but obviously Peralta denies it. Awww I can’t help but think this plot is super cute!

But now Santiago is starting to date her ex, Teddy. 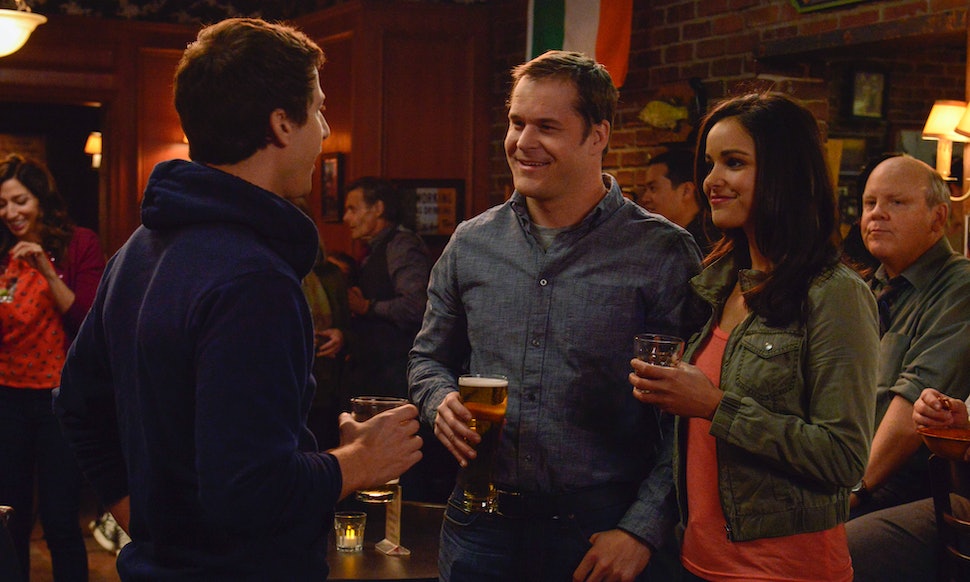 Charles has now asked Peralta to be his best man, and now Peralta has to do all these crazy things that Charles wants. We then learn that he’s planning to retire from the force and move to Canada with Vivian. Now Jake has to try and stop him, only that doesn’t go so well. Charles can’t say no to Vivian, but he finally tells her how he feels and now they’re talking about moving. I have this strong feeling that Vivian is going to try to convince Charles to go.

Terry is the sweetest. He starts this crazy diet which we later find out is because his wife is on a diet and he’s trying to support her by doing it with her. Awww.

Did they just reference Dexter? Their unsolvable case of Nate Dexter who died… or they thought he died in a boat explosion… which is how Dexter ended. Well he solves that unsolvable case, yet he isn’t happy about it. That’s when Terry notices something is up… and he figures out it’s Santiago.

The season ends with Vivian breaking up with Charles and he’s become this dark and depressed man. So we’re led to believe that Jake has gotten fired from his job. Then we get the backstory and he’s working on a case that no one wants him to touch. Well you can’t say no to Jake, he does it anyways and so he gets put on trial for it, this is where we’re led to believe he will be fired… since he gets fired, but Holt told him to get himself fired… so now he’s going undercover for 6 months to try and catch this drug lord. 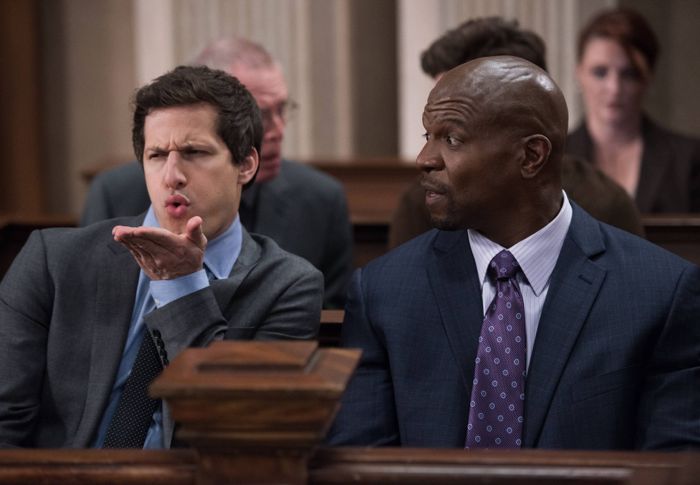 And of course he finally tells Santiago his feelings since he knows that they can’t be together now, he doesn’t want to regret not saying it. This is totally going to get her wheels turning.

Then we end with Charles in bed with… Gina! HA! This show does not disappoint. 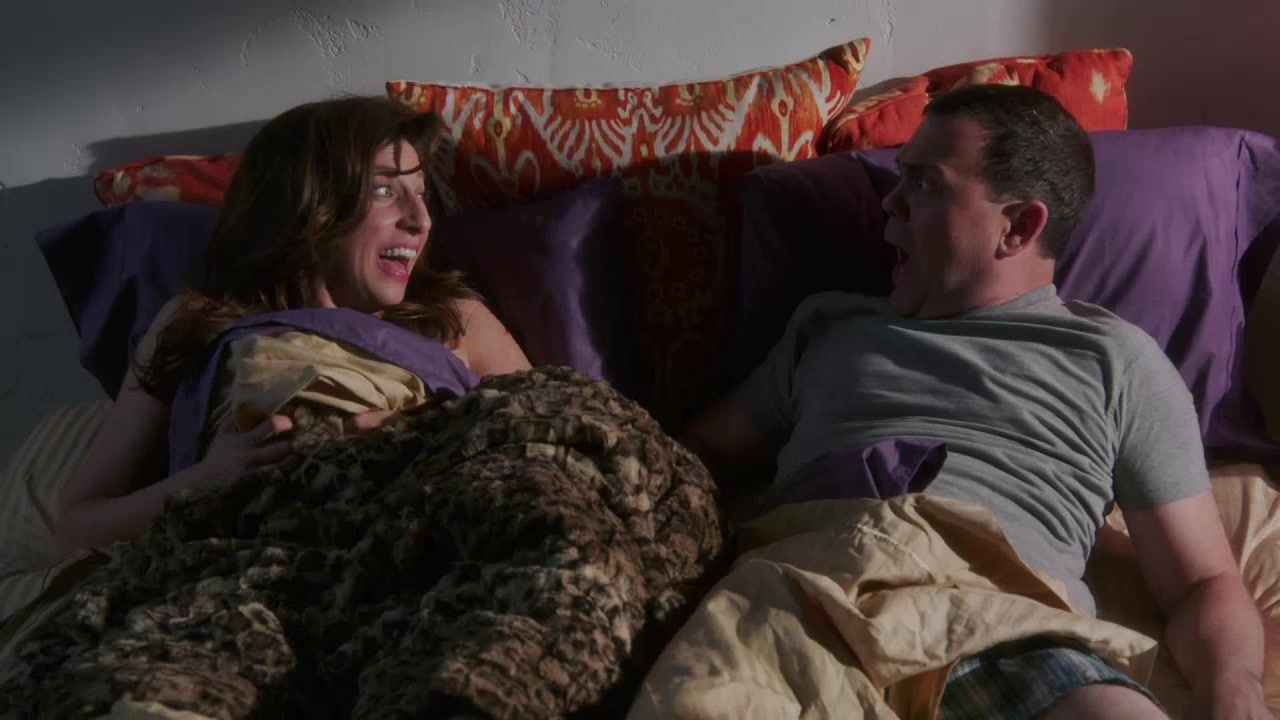