Hi everyone! Welcome back to TV Tuesday! This week I’ll be starting a new tv show, MTV’s Awkward.

This show is completely weird. The show centers around Jenna Hamilton, a teenage girl who is on the outside. Ignored by everyone in her high school, and her parents are young parents who are very weird. Her mother is all about being her best friend and hanging out. She’s one of those moms where it’s all about how she looks. Her dad at least isn’t so bad (as of yet).

She has two best friends Ming, who we don’t see much and the other Tamra who is a little crazy and blonde for a brunette.

So the story starts at summer camp where her crush Matty eyes her down and she looses her virginity to him and thus begins everything with the two of them. He doesn’t want to be seen with her so they have this friends with benefits in secret. Then she gets a note from someone anonymous that she should pretty much stop being a pussy and so she writes a really angsty note and then falls, breaking her arm. So now she is the talk of her high school. Everyone thinks she’s suicidal.

But as time goes on she learns to live with the giant cast and everyone looking at her, and she takes the bull by the horns and just goes out there a plays a game for the spots team. A girl and a guy have to switch clothes and she ends up winning, that gets Jake to notice her.

Now she has two guys after her, and all she wants is Matty. There’s a party that Matty invites her to, only it’s a small party and her new enemies, Sadie and Lissa are not happy about it. But Jenna sees Matty making out with other girls, so she dips, as she does so she runs into Jake and they become friends, although you can clearly tell he wants more.

But everyone at that party got pink eye so she at least got to miss out on that. Now Jenna just wants to DTR, but she’s finding it hard to ask Matty. Her friend Ming is upset with her because she feels left out.

So when Jenna pretty much gets dumped since he doesn’t want a relationship, Ming is the first person she tells; I think it’s sweet and we finally are getting more of an introduction to her character, even if she’s kinda stereotypical.

Speaking of stereotypical, a lot of the characters are, and it’s a little annoying. I hate Jenna’s guidance councilor, Valerie. She’s so odd and she’s such an airhead. Ugh.

So her mother wants to be this wicker-bonnet thing and well that goes over oddly. We really get to see Sadie and how much she hates herself and how it has to do with her weight. It was good to see a glimpse into her character, even though she’s a complete bitch. I don’t even think she’s that big, I think she’s actually really pretty.

They become the bonnet people and that’s when Jenna’s mother realizes it’s not worth it to be part of that group. Well I’m glad she figured it out, even if it was a little late.

I hate that we have this love triangle thing going on. So Jake kisses Jenna because he thinks she’s talking about him, when really she’s talking about Matty. But we can’t forget that Jake has a girlfriend (one of the girls who hates her) and Sadie has a big crush on Matty.

Side note here: I can totally relate to the mean girl having a crush on the popular guy, but the popular guy likes you. It makes you feel good, but I’d never want to be in that position again.

She thinks Matty has a girlfriend, who looks like her and so she’s Jenna 2.0 or Olivia. Jenna gets to know her and finds out she’s just as nice, and then it turns out that Matty has no girlfriend, but it’s his brother’s girlfriend.

But watching the turmoil between Jake and Matty is somewhat fun because it’s actually done where it’s believable. Matty doesn’t like that Jake kissed Jenna and he’s completely jealous. And Jenna isn’t going to wait around for Matty to come out with his feelings, which I think is the right thing to do.

So they have this rager party and Jenna can’t remember anything, so she doesn’t know who she made out with Matty or Jake. As it all comes back, she may have done both. Turns out it was neither of them, but her best friends crush. Yikes! That’s when we find out that it was Tamara who wrote the anonymous letter that started Jenna on her suicide escapade. Holy smokes, can’t say I saw that coming. But she did make a fair point that Matty is only using her for sex.

So now they’re not talking. Tamara has forgiven the guy but won’t forgive Jenna. But she does tell her that she actually didn’t write the letter. Instead she tries to pin it on Matty. I hate that we keep going back to hating Matty and making him the bad guy, I just want to like him.

On Jenna’s birthday everyone kinda forgets and treats her like garbage, but the ending is beautiful because I like how honest Matty is. I like the two of them together, they are just super cute. Plus he’s starting to take her out in public, but he still can’t tell his best friend, Jake because he knows that he likes Jenna.

When the kiss between Jenna and Jake gets out his girlfriend, Lissa freaks and hits Jenna. He tries to stay  with Lissa, but she is super demanding (thanks to Sadie as she’s the brains for Lissa since she can’t seem to think for herself). They want him to never talk to Jenna again, but he can’t do that and he finally breaks up with Lissa, thank god.

Just when you think the love triangle is over, it’s not. So Jake asks Jenna to formal when she’s kinda already going with Matty, even though he hasn’t officially asked her. Now Matty doesn’t even want to go; when Jenna’s letter gets out on the back of all the ballots, that’s when Matty backs out. Ugh. Why can’t we just have one boy. I like Jake as the nice boy who’s the friend, not the boyfriend. But then when Matty is longer taking her, she asks Jake, and of course he says yes.

The first season ends on the formal. Jenna goes with her friends, Jake included. It’s cute and looks like they’re having a good time. 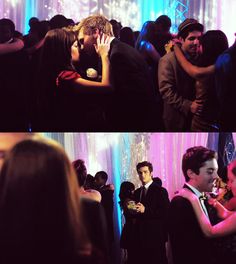 Then Matty shows up at the house asking for Jenna but she’s already left. This could be bad, as Jenna kisses Jake at the dance right in front of Matty. But we find out that he didn’t want to hurt Jake and that why he didn’t say anything. Jake tells him he should steal the girl away, not realizing it’s the same girl. Ugh so sad.

What I do like is Lissa finally stands up for herself and doesn’t let Sadie walk all over her. She’s such a bitch. I like that people are starting to rebel against her, she deserves it.

In the end we figure out it was her mother who wrote the evil note. What a mother!

I have to say it’s very relatable. I know as a teenage girl I felt the same way as Jenna about the guy and whether they liked me or not, and then trying to figure out where we stood. For the first season, it wasn’t a bad season, but you really have to be in the mood to watch a teen drama.